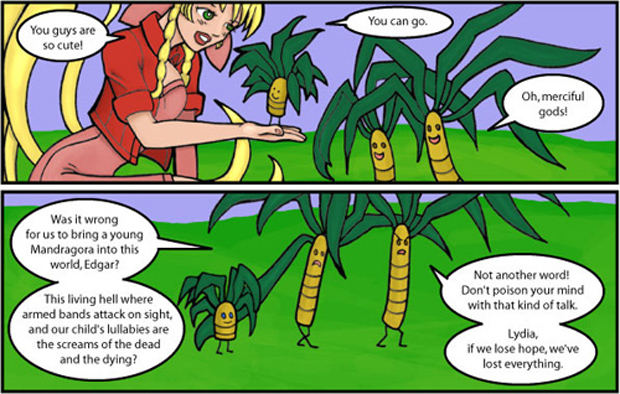 At a conservative estimate, a Ruby Dragon would need to consume approximately 50,000 calories in the form of raw meat per day in order to sustain itself. Given that the most plentiful food source available to these creatures is skinny JRPG protagonists (that spiky hair sticks in your colon), it’s not at all surprising that these desperate, starving behemoths are often driven to brutal acts of violence.

So, when in an RPG you have to slay a creature of unbelievable beauty and mythic proportions, at least you know there was no other way. To them, you are not a sentient creature with hopes and dreams, but at most, a nutritious breakfast. It’s you or them. The assumption in nearly all RPGs is that if left to their own devices, the monsters would gladly kill you, presumably for food but quite possibly for nothing more than the cruelest of sport. Why should you feel an ounce of guilt for repeatedly slaughtering them and their ilk, when given the opportunity, all they would do is gladly maul you to death, hungrily snack on your entrails and previously vital organs while your mutilated corpse cools, and finally, steal all of your hard-earned gil?

Wait, I meant GOLD….wait, I actually meant MONEY. You know what? Shut up.

Dragons: Tired of eating skinny emo kids, they are reduced to begging for a role in Fat Princess.

Of course, this isn’t just an abstract concept — in battle, monsters will viciously attack you with their powerful jaws (and slimy tentacles, if applicable), cast spells on you, and actually kill you at times(!), so you shouldn’t feel an ounce of guilt for killing them. Instead, go about and rip out their teeth, hair and skin to sell on on the black market so you can better equip your private army … I mean, your band of noble freedom-fighters. Nope, not an ounce of guilt, not a bit. No guilt here, nosirebob.

… Except, have you ever gotten the impression that some monsters just aren’t trying that hard to kill you?

Too Pathetic To Die

Let’s take an area that many, if not most, gamers are likely to be familiar with: The greater Chocobo Ranch area in Final Fantasy VII. Among the local wildlife are Mandragoras (tiny little plants that look like ambitious stalks of broccoli), Elfadunks (blue little elephantesque creatures that look a little like Dumbo), and Levikron (confused but friendly Ostriches.) Their design is charming, their formations the opposite of intimidating, and their attacks are weak. In fact, I would go so far as to say that anyone who has actually gotten a Game Over in this area must have been trying to (unless it was one of those people who had lots of trouble navigating the first reactor because “These 3D games are so confusing!”; you know who I mean.) Needless to say, they pose no threat.

For what unearthly reason would these poor, doomed creatures attack a band of armed vigilantes? Yes, they ARE “monsters”, but for God’s sake, Pikachu is a monster; the term has been deprived of all it’s meaning. This lot aren’t attackers, they are merely a slightly undisciplined, free-range petting zoo. The effect is even better when a Chocobo is in the vicinity, because not only are you then expected to kill adorable monsters, but you have to do so with a chipper “Surfin’ USA” kind of tune in the background. Not to mention the fact that you learn while breeding Chocobos that the native breed live perfectly at peace with the Levikron, and you need to go halfway around the world to Icicle to find the ones that are mean sons of bitches. It’s a stable, friendly ecosystem, in which YOU are the only cause of violence.

The awesome POWER, the heart-pounding TERROR … it’s dangerous; it’s ADORABLE. If the plushie is this cute, stop asking me to kill it you bastards.

Would you kick a baby in the spleen???

True, they are technically attacking you, but so what? When a toddler waddles up to you and lightly punches you in the leg with a giggle, you don’t then kick the toddler in the stomach for invading your personal space; they just don’t know any better! Those little Mandragora aren’t trying to kill you, they’re just trying to get your attention in the hopes that you’ll give them some tasty Gyshahl Greens or something. What party, what gamer, walks around this peaceful realm and says “I need to kill a bunch of these harmless thingies for experience.” One sick, sick individual, that’s who.

Message to developers: If you want us to feel okay with regular bouts of wholesale slaughter in our games, please make it obvious that the opposition is both willing and able to kill us. (See: Resident Evil 5.) I’m talking aggressive behavior, glowing red eyes, ear-splitting roars, that sort of thing. Because I don’t want to decimate the local cute and fuzzy population anymore just so I can get a few more points of crappy experience.

… Well, except maybe Pupu from Final Fantasy VIII. That little fucker had it coming.