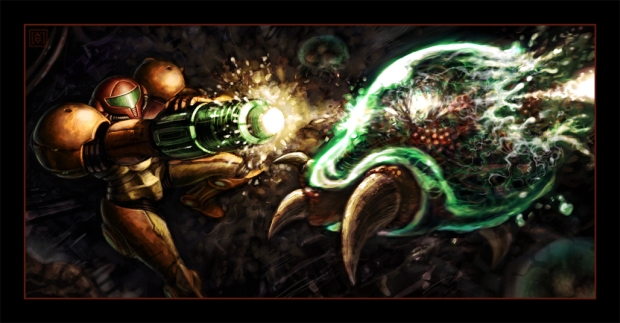 [Editor’s note: Mighty Pinto talks about Metroids for his Those About to Die Monthly Musing piece. — CTZ]

Alright people, this is it. This is the moment where I stop being cheeky and actually pour a little soul out for you, my fellow Dtoiders. I know I’ve already admitted my fear of the vampiric jellyfish known as the Metroid a few months back, but now with the new Monthly Musings theme in place, I feel it is the perfect time to go into further detail regarding my history with these vile space-borne abominations.

While it is true that I have feared and hated these creatures since my childhood, I have also gained immense respect for them over time. The Metroid, while one of Samus Aran’s (and consequently my own) greatest nemesis, is one of the most perfect monsters in all of videogame-dom: deadly, ruthless, and terrifyingly efficient, with only one major weakness.

I think it’s their initial larval appearance that makes them so damn scary; I mean, let’s face it … there’s nothing scarier than a Portuguese Man O’ War with teeth. Couple that with their trademark “SCREE” sounds, and you have some good old-fashioned nightmare fuel. Come to think of it, the Larval Metroids are really the most terrifying, even if they are the weakest. I know it sounds strange, but taking on an Omega Metroid isn’t nearly as scary to me as taking on, say, one or two Larvae.

As I stated in my “8 Things” blog, they weren’t so bad in the first game, mostly because they were all lumped in Tourian, and they made this weird bubbly-noise that, while still eerie, just didn’t have the same pant-shitting terror of the almighty “SCREE”:

It was the second game that first made me fear the Metroid; running through the dark innards of a savage SR388 with only the occasional chirps and squawks of nearby enemies for comfort. I remember coming across the first Metroid in the game, seeing that all-too-familiar jellyfish just lying there motionless, it’s mandibles dug deep into the alien soil like it was clinging to it for dear life. As soon as I approached, the unthinkable happened; the Metroid’s outer casing split open to reveal an Alpha Metroid, a huge insect-like abomination with black, soulless eyes and mandibles the size of steak-knives. I remember firing a volley of missiles out of a mixture of fear and adrenaline, hearing it’s SCREEs of agony as each missile tore through its chitinous mass. Finally it exploded, leaving me sitting there a nervous, sweaty mass, my breath ragged and my fingers twitching like fly pincers. Needless to say, I wasn’t prepared for that.

Of course, it only got worse. Every time I’d see a discarded Metroid casing, my hair would stand on end; because I knew one wasn’t too far off. Even worse still is when I’d run into a Metroid, then find their shedded carapace shortly afterward! Still, as the Metroids got larger, the less terrifying they became; the alphas made my skin crawl, but the Zetas and Omegas were little sweat for me. Of course, nothing prepared me for what happened at the end of the game.

I was on my way to fight the Metroid Queen, ready to tackle the small series of corridors leading to her chamber. I checked the small Metroid Detector at the bottom right of the screen, its numerals reassuringly displaying “01”, putting my already-tattered mind at ease. I’d already seen what the Queen looked like thanks to the advertisement for the game (great job, Nintendo for revealing the final fricking boss before the game was released) and I already had the maximum amount of missiles required to take her down, or so I thought … because no sooner did I enter the final area when THIS happened:

(check out the bottom right hand corner of the screen at 0:04)

When I saw that counter go back up, I nearly shat myself. All the confidence I had gained throughout my previous battles with the Queen’s unholy brood were all but shattered, reducing me to the same tattered ball of nerves back when I killed my first Alpha. I knew what was coming next … and I didn’t like it.

Super Metroid wasn’t nearly as bad in that regard; again, like in the first installment, the Metroids were all lumped into the newly-rebuilt Tourian, though they were much more resilient than the first go-around. That, and they still SCREE’d. There were also the “Mochtroids”, which are basically the Metroids’ rarely-spoken-of inbred cousin. They were initially creepy at first, though once I found out how pathetically WEAK they were, I didn’t really sweat them all that much. I did shudder a bit, though. The only moment that made me jump was the arrival of the “Super” Metroid itself, the now-giant hatchling that was found at the end of part II. Eventually it recognized who I was and stopped trying to suck my soul out through my nostrils. Then the unthinkable happened. The thing just hovered over my head, letting out tiny mewls of apology, as if it were trying to take back all the sleepless nights it’s ilk had wrought upon me for years. For a moment, I felt bad for it. I actually felt BAD for it. A METROID.

After it gave it’s life to save me from certain death at the hands of Mother Brain, I realized that Metroids weren’t just mindless killing machines. “Maybe they’re just misunderstood … ” my young, naive mind thought to itself, brimming with newfound adoration for the poor, slighted Metroids. “Maybe we CAN live in harmony with Metroids!” I cried aloud, before remembering that Metroids don’t actually EXIST and I was talking crazy. “Hell, being SCARED of them was stupid in itself, they don’t exist!” I thought again. With that notion in mind, I re-played through the first three titles again and again, slowly eroding the phantom of the Metroid from my mind.

Then Nintendo released Metroid Prime, and once again, my confidence was shattered. The Metroids were back, but this time I got to see them coming right for me, instead of seeing Samus getting glomped in two dimensions. Now they could attack me from any angle. I remember hearing them SCREE with delight as I ran full-speed through corridors and chambers, hearing them hovering behind me, their mandibles wriggling against each other at the thought of digging into my Power Suit like a can opener into a fresh can of Campbell’s Chunky Beef Stew.

However, during one of my encounters, I’d noticed something interesting. I was in a skirmish with a few Space Pirates when I accidentally blasted open a Metroid containment tube in the Phendrana Drifts. Dread immediately crept over my skin until I realized that the Metroid wasn’t interested in me at all. I watched as it descended upon the nearest Space Pirate, latching onto his tiny head and draining him of life, it’s jellyfish body crackling with electricity as its mandibles wriggled in satisfaction. THEN it turned toward me, but this time I was ready, and I wasted it with little effort. I tried the experiment again; this time staying in the shadows and hitting the nearest tube, freeing the Metroids encased within. Seeing the Space Pirates first, they immediately attacked and killed them with little effort, draining them of life before turning toward me. The third time I tried it, I hit the Metroid when I shattered the tube, and it came right for me, Space Pirates be damned.

It was then that I really started to respect the Metroid for what it was; a ruthless killing machine. It didn’t discriminate, it had no personal vendettas, just one simple principle: “If you’re in my way, I’m going to EAT you.” That’s it.

Man, am I glad those things don’t actually exist.