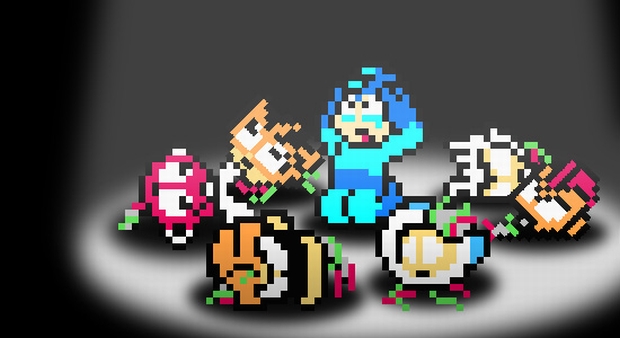 Another musing, another Mega Man article. It’s as if I hold some strange and unhealthy fixation towards the series. And because I’m so fascinated by the franchise, I ponder about certain elements that wouldn’t cross the mind of any sane person. For example, while you are playing one of the games, do you ever consider what must be running through Mega Man’s head as he lays waste to fellow androids? Probably not much past “there’s an evil robot … KILL IT!” But are these robots truly evil? Are they not being manipulated by a madman for his personal gain?

According to the backstory, all Robot Masters (of which Mega Man is counted among) are capable of independent decision-making. Maybe not to the degree that X and the Reploids later in the timeline are capable of (X was the first robot with absolute free will), but that’s not to imply that they are lifeless machines. Each Robot Master has a unique personality, character flaws and all, that renders it almost indistinguishable from humans aside from physical appearance. As they gain worldly experience, their mind develops not that of a child. Mega Man, whose development has surpassed that of all others robots, is presented as evidence that self-aware automatons can develop a soul.

Dr. Wily’s Robot Masters are constructed with the explicit purpose of annihilating Mega Man and taking over the planet, but most Robot Masters are dedicated to aiding humans and enjoying the life they have been given. It’s unfortunate then that many of Wily’s plots involve capturing well-meaning robots and reprogramming them to do his bidding. As the Earth’s savior, Mega Man has no choice but to fight these robots who only wanted to help mankind. It must be tough on Mega Man to have to destroy his own kind, especially those built for a life of peace then twisted into tools of war. However, encounters with random, unfamiliar robots cannot compare with the magnitude of Mega Man’s inaugural “adventure.” I’m talking about the time when Wily stole Dr. Light’s worker bots and set them upon the world and Mega Man had to bring each and every one down.

Mega Man was forced to kill his brothers.

Okay, so the relationship among Mega Man and the Original Six (eight if you adhere to the retcon in Mega Man Powered Up) was not sibling connection by human standards, but it’s as close as you can get to a one in the robot world. Bomb Man, Guts Man, Cut Man, Elec Man, Ice Man, and Fire Man were built alongside lab-assistant Rock (Mega Man’s original designation), housekeeper Roll, and estranged Proto Man. They were built from common blueprints by the hands of a common creator. They lived together, worked together, and developed together, sharing a few laughs along the way. They were a family. And that family was torn apart by Dr. Wily.

When Rock heard of what had befallen his brothers, he urged Light to make him combat-capable. This tiny android with the body and mind of a pre-teen boy and no battle experience whatsoever was dead set on stopping his siblings’ rampage himself. Young and naïve, he probably assumed that he could reason with his brothers and convince them to set their sights on apprehending Wily. Imagine his shock upon encountering the first brother and finding not the companion he once knew but a vicious beast inhabiting his brother’s body. His determination wavering, was he mentally prepared to pull the trigger and end the struggle the only way it could end?

I’m certain many of you have had to euthanize an ailing pet because you could no longer stand to watch it suffer. The ironic decision to take the life of a close relation out of an act of love is bound to be wrought by conflicting emotions. Instead of a pet, imagine having to pull the plug on a human family member and how the difficulty of your decision would magnify exponentially. Now imagine doing that six times. No human could live through such trauma without serious psychological damage. It would take a heartless machine to be able to bear that load. Is that what Mega Man was forced to become?

Like I said before, I’m not sure how “human” Mega Man is. Can he recognize the shades of gray along the human ethics spectrum and adjust accordingly? Does his moral compass only point in one of two directions, skipping over the intermediary gradients? Or is he only advanced enough to be able to understand the gravity of his actions yet unable to express the proper human routines and emotions, leaving him frustrated and confused? In any case, whatever childlike innocence he may have possessed prior to that first mission died along with his brothers. He now carried a burden that no one should have to bear.

But Mega Man’s story doesn’t end there. No, Dr. Wily is one sick son of a bitch. The nature of robots means that they can be reconstructed, and so Mega Man was thrust into battle against his six brothers a second time. Mega Man’s sins were not about to allow him any time for recuperation. Not even a memory and already his ghosts were haunting him. Having already killed them once, was his job any easier? Knowing now that he was capable, was he numb to the pain of recreating the slaughter?

Sadly, there was no respite for Mega Man even after he dismantled Wily’s fortress. If expanded universe materials are to be believed, Light eventually rebuilt the Original Six so that they could resume their intended duties. With the intimate knowledge of his previous encounters with them, I doubt Mega Man could ever be comfortable around them again. Likewise, those six would naturally feel the same in return. What a joy family reunions must be, huh? Try as they might to sweep the past away and remind themselves that Mega Man was not to blame for carrying out his duty, being killed by someone is bound to change any favorable opinion you have of that person. Maybe you’d find it easier to forgive him had he only killed you once, but definitely after the second time you’d start to wonder about his trustworthiness and mental stability.

And so Mega Man’s first mission was his hardest one. Perhaps he could have regained some sense of normalcy had his first time been against random killer robots like the kind Wily would unleash in later years. The guilt of destroying other robots would have still weighed down upon him, but it would have been a more favorable scenario than that of taking a crash course in Murder 101 against his own family. In any case, Mega Man would continue to fight Wily in the hopes of one day bringing him to justice. The people would cheer for the Blue Bomber. Their champion of hope. Such an upstanding citizen with a cutie-pie face and a cheerful disposition.

And while Mega Man put on this charade to promote good will, he would agonize over whether or not he could ever find a measure of peace of his own.
. . .

Déjà vu, indeed. Years had past since the nightmare and Mega Man was finally starting to regain some of that boyish spark. The memory of what transpired could never be forgotten, but he was learning to cope with it. One day, a newscast reports that eight of Dr. Light’s androids are loose in the city. Seven more brothers and now a sister. Something finally snapped in Mega Man. Look at that image above. Look at that stern resolution. That determination. Some might call it heroic. I call it the last shred of a soul being lost forever. It’s like Mega Man doesn’t even care anymore. He’s been fighting for so long that he’s become no different than an assembly arm at an auto factory. He seems unconcerned that he is about to destroy his family once again. This was the final straw.

You have to wonder … was Dr. Wily’s goal ever to rule the world? Or was it to send the one promising robot who people dreamed could bridge the gap between humans and machines through a vortex of madness harsher than the lowest circles of hell, keeping that dream forever out of reach? If so then he succeeded. The bastard won.