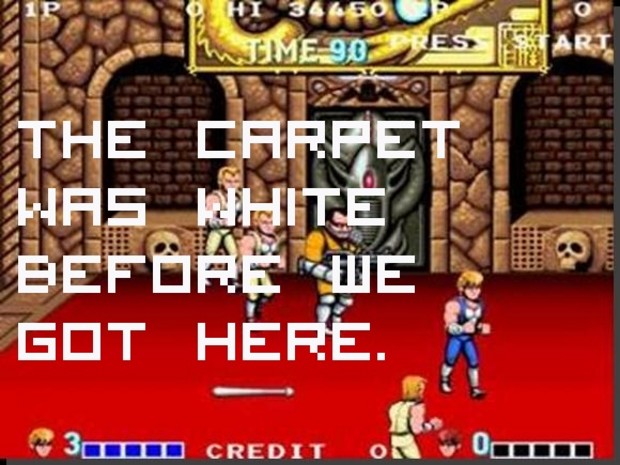 [It’s time for another Monthly Musing — the monthly community blog theme that provides readers with a chance to get their articles and discussions printed on the frontpage.

The new Monthly Musing theme will be announced on Monday. Until then, I’m going to continue promoting April Monthly Musing blogs so long as there are any good ones– CTZ]

Post-Apocalyptic New York City, it seems, is not such a bad place. It’s a place where two brothers, man-children reared in the crumbling back alleys of the crumbling post nuclear New York City, have somehow become the Godlike purveyors of the mighty Sōsetsuken. It is a martial art so f*cking bad-ass that it took a nuclear war to drop it into the world amidst a swell of blood and broken teeth. It is a style powerful enough to rule a city if possessed by the right kind of man.

It is here that we find our man-children, Billy and Jimmy. In a world without beer, tacos or even a Goddamned Van Halen record, our heroes pass their youth. They share a mastery of the mighty Sōsetsuken. They share the largest stockpile of karate headbands on the continent. They share the same tattoo artist. Their staunch adherence to the path of heterosexuality is apparently assured by the presence of Marian, whom they also probably share.

Marian, it seems, is the only girl in the ruins of New York who does not need a serious fucking attitude adjustment. She carries no whip and could never be mistaken for any kind of New York variety post-apocalyptic prostitute. We can only assume that she is supportive, making sandwiches out of simple cockroach meat when necessary and never complaining that her youth is being drained, slowly, inexorably, by the insatiable urges of the practitioners of the manliest of arts, the mighty Sōsetsuken. Dear friends it’s true that a day of God-knuckles slamming into the comparatively fragile skulls of an uncountable enemy makes a man hungry for two things: rare red meat and brief love. In that respect, Marian became the life force of the Double Dragon because the ruins of the world lack the red meat that a man needs to sustain himself.

Enter the Black Warriors. Enter Willy Mackey. Enter the only assault rifle in New York City. Behold, dear friends, a collision course the likes of which New York has not seen since the Communists and the States bombed the living fuck out of each other. Machine gun wielding Willy, it seems, wants the mighty Sōsetsuken all for himself. Instead of doing the sensible thing and offering what women he may have had to the Double Dragon he chooses the opposite. He chooses war. He chooses to kidnap Marian.

Now, removed from the recipient of their manliest of energies, the Double Dragon was truly unleashed. They have never seen a puppy nor a rainbow nor the shine of bacon. They know only the cruel satisfaction of knuckles on bone and the dizzying comfort of a woman. Now that woman is taken and every motherfucker standing between the Double Dragon and Marian is destined to get his God-forsaken skull caved in. The second apocalypse had begun.

And there was blood in the name of lust. Willy sent forth all his minions, including his whip-wielding vixens in an effort to quell the mighty Double Dragon. They were only cows standing in front of a freight train of death and fists. The magnitude of just how completely fucked the Black Warriors were became apparent with each passing city block. Large men, men the size of Barry Bonds’ steroid coach, men with singular multisyllabic names like “Abobo” came forth and had their worlds fucking destroyed by the Double Dragon. Death filled the streets and there was death to come.

Willy’s rage at the defeat of his Black Warriors was broadcast to the spires of the ruined city by his rifle. The Double Dragon, fearing no pitfalls, fearing no ridiculous traps involving spikes, and certainly fearing no bullets bore a path through the skulls of their enemies and revealed Willy’s hideout to be as dumb of a joke as the stonewashed jeans and half-vests of its guardians. Willy’s fate was no different than that of his minions. In a mocking gesture, the Double Dragon turned Willy’s own gun on him as if to say : “YOUR SHIT IS NOT WORTHY OF OUR MIGHTY CRAFT. DIE UPON YOUR OWN FILTH YOU CUR.” Die he did. He died the second he fucked with someone else’s girlfriend.

Now our brothers’ bloodlust is satisfied yet there is only one Marian. Two men, destroyers of worlds and one woman. Blinded by the power of Sōsetsuken the men realize that there is yet one more man who must fall. There can be only one Alpha and the raging battle has disturbed the status quo. The brothers are not like those who were about to die. One will prevail, the Alpha. One will fall, a few teeth lighter, with bruised pride. Balance returns. The future awaits.