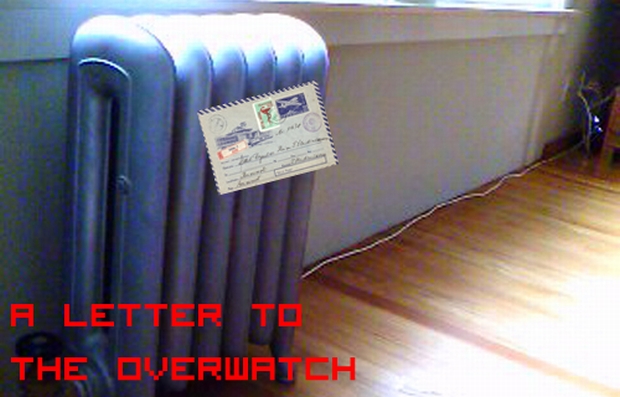 The following letter was discovered in City 17, at the site of a recent firefight between Combine forces and members of the human Resistance. It was attached to the side of a steam radiator that had been embedded in the wall, as if thrown with extreme force. The letter has been transcribed and copies forwarded to Black Mesa East for archiving and slideshow-drama enhancement.

“To the men and transhumans of the Combine Overwatch,

It would be quite the understatement to say that we often have “difficulties” when dealing with each other face-to-face, but I cannot but empathize with you and your Civil Protection counterparts. I find, upon examination, that we have as many commonalities as differences.

Like you, I rarely get the opportunity to express myself. I too am all too often used as a silent pawn in the games of others, with naught to do but follow orders, no matter what dangers may lie ahead. The cause I serve is noble, though, and I am saddened to know that it is utterly opposed towards yours, which renders our differences irreconcilable. All I can do is convey my sympathies, and continue on my way.

You members of Civil Protection must perform a thankless duty, policing a populace that views you not as liberators, but conquerors and even traitors. Your feelings, identity and genuine desire to help your fellow humans is hidden behind a skull-like gas mask and voice modulator. A good friend of mine and drinking buddy was once one of you, and he has made clear what you must deal with on a daily basis. And for what? The chance to fire off some “verdicts” on the range? “Non-mechanical reproduction simulation,” as your dispatcher disinterestedly offers? I suspect that they might even extend — and then retract — promises of delicious cake, just for laughs … assuming your alien overlords can laugh.

I can definitively say, however, that your performance in trying to stop the *ahem* amazingly skilled, nigh-invincible, bespectacled Adonis codenamed “Anti-citizen One” was exemplary. You could have just let him pass, but you bravely threw yourselves into his line of fire, your noble sacrifices delaying him as he used a Gravity Gun to propel random objects into your ranks, all in the hope of excising a threat to City 17, your home and stomping ground. While it was of course highly unlikely that you could have stopped the Anti-citizen, given his obvious superiority, your actions were laudable and quite worthy of recognition, futile as they were.

Your friends in the Overwatch are also equally worthy of praise. The professional, composed responses they displayed in every encounter with the unstoppable and masculine Anti-citizen, who also has a Ph.D, are inimitable. I am amazed that they were able to manage any effective resistance at all, considering the inferior equipment received under the Breen administration. Their standard-issue pulse rifle could barely carry enough ammunition for three reloads. Their grenades bounced and rolled far too much to be useful, often wreaking “Havok” amongst allies rather than enemies. Their sniper rifles emitted a highly visible sight beam, which any resistance fighter, much less the highly knowledgeable and almost omniscient Anti-citizen could trace to your location. I imagine that many of them would like to train that sight beam upon whichever dolt designed those rifles. To add insult to injury, they were supplied with tripod turrets that could barely hold themselves up! How the designated protectors of humanity could work under those conditions, I may never know.

The elite “transhuman” corps is in a particularly pitiable state of affairs. Suffocating in hard-to-clean white body armor and a peripheral vision-depriving helmets, the elites are stuck staffing the Citadel, a stark complex full of nothing but zombie-esque stalkers and ugly coffin-elevators, manning security systems which do nothing but further enhance the Gravity Gun of their already overwhelmingly powerful and attractive Anti-citizen opponent. Their special energy-ball subweapons bounce so uncontrollably that they present as much of a danger to their users as their targets! To think that the late Administrator Breen would have the gall to blame them for their inability to stop an MIT-graduate God-among-men-and-transhumans. I feel for them as I feel for you.

I am sure, however, that Anti-citizen — who in all other ways is your superior — does envy you in some ways. I am … I-I-mean he is — virtually surrounded by mewling incompetents, failures at life who, without my — I mean his aid, would be but corpses in a ditch. Unable to rely on them for anything, the Anti-citizen stands alone. You and yours in the Overwatch have each other, incapable as you are of defeating your deific enemies. You can communicate on an equal — though inferior — level. And you can do so in style. Perhaps you take it for granted by now, but have you realized how incredibly intimidating your radio chatter sounds? Incompetent as the Combine leadership is, they have enabled you in the Overwatch to make your presence and authority apparent, dark discipline oozing from every syllable that comes out of your mask-mounted voice modulators.

Truly, whomever authored your radio codebook must have been inspired. Inspired perhaps, by CDC promotional fliers and a twisted, disturbingly alien and contemptuous view of humanity, but inspired nonetheless. Every time you throw a grenade and count down “Three-two-one-FLASHFLASHFLASH”, and every time the last surviving member of your squad calls “Outbreak-outbreak-outbreak!”, the “exogen,” as you call him, is jealous. I assure you, the Anti-citizen listens as you send back and forth in your futile attempts to halt a force of nature contained in a garish orange HEV suit. He listens, and resents his own taskmasters’ inability to say anything more creative than “Gordo-I mean Anti-citizen do this, Anti-citizen do that, blah blah blah blah.” If not for a pretty young lady and her dog, he’d have long ago left them to rot in a portal storm.

I understand that we may never be able to meet under peaceful circumstances. This game we play is zero-sum, and will not end with more than one standing. Therefore, I write this address to you as an expression of solidarity and mutual understanding. If any of you survive to read this, I hope that knowing of this shared experience can provide you some comfort, in addition to the fact that being able to read this at all means you have survived the wrath of the divine.

“P.S: YOU SHOULD HAVE NEVER, EVER EVER MADE ME PICK UP THAT CAN IT WAS THE WORST MISTAKE YOU EVER MADE I TORE YOU A NEW ONE AND YOU CAN EXPECT A FEW MORE COUNT ON IT YOU COULD HAVE PICKED UP THE CAN YOURSELF BUT NOOOOOO YOU HAD TO CALL DOWN THE THUNDER AND THE LIGHTNING THE FIRE AND STORM YOU BROUGHT THIS UPON YOURSELVES GG QQ KTHNXBYE”