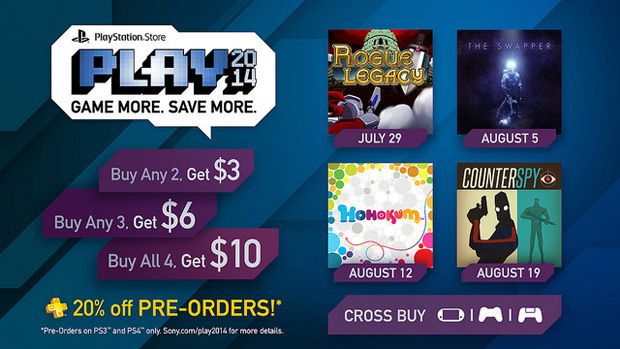 Four upcoming PS3, PS4, and PS Vita titles (with Cross-Buy!) have been confirmed for this year’s PlayStation Store PLAY promotion: Rogue Legacy (July 29), The Swapper (August 5), Hohokum (August 12), and CounterSpy (August 19). That means you’ll be able to get PlayStation Store credit — up to $10 — if you buy two or more of them. It’s all right there in the image.

And for PlayStation Plus members, there’s extra savings to be had: just pre-order for a 20 percent discount. At the very least, you’ll want to consider doing that for Hohokum and The Swapper if you haven’t played it on PC yet. CounterSpy looks rad, too. And, heck, if I don’t also mention Rogue Legacy, someone will say something. Yeah, good lineup this year.