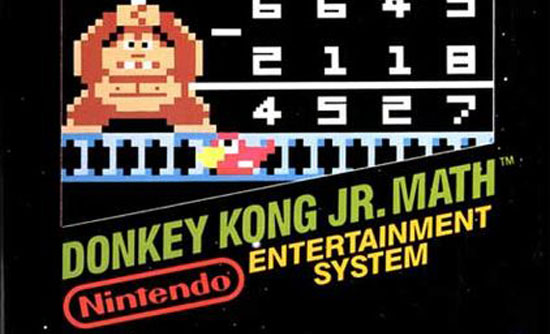 In honor of “back to school season,” Nintendo has released Donkey Kong Jr. Math (NES, 1-2 players, 500 Wii Points) on the Wii Shop Channel today. The irony of this is that today is Labor Day, and kids have the day off from school. The last thing they’re going to want to do is help Donkey Kong Jr. (and in two player mode, his illegitimate pink son) solve multiplication problems.

The official press release and a chance for me to sleep off this hangover after the jump.

Everyone believes education is important, even apes. To celebrate the back-to-school season, Donkey Kong Jr.™ Math is now available on the Wii Shop Channel. It’ll help you get those math skills back in shape after their summer slumber. After that, there’s still plenty of adventure, treasure seeking and a never-ending supply of bad guys to fight. Good thing it’s a holiday today, huh? Enjoy.

Adventure Island (NES®, 1 player, rated E for Everyone – Comic Mischief, 500 Wii Points): A mysterious tropical paradise known as Adventure Island is the setting for this side-scrolling action game. The evil Witch Doctor has kidnapped Tina, the true love of Master Higgins. To save her, you must safely guide Master Higgins through eight perilous stages – including dense forests and creepy caves – while defeating all of the enemies in your path. Each area is made up of four rounds filled with enemies determined to stop you in your tracks. In addition, as time passes, Master Higgins’s vitality is automatically drained. To keep going, he must eat constantly by grabbing fruit, milk and whatever other goodies he can as he races toward his goal. Sometimes eggs containing miraculous items like axes to throw at enemies or honey that grants temporary invincibility will appear. Use items skillfully to help you clear the areas. At the end of each area you’ll face the Witch Doctor, who you must defeat to advance. Go, Master Higgins, go!

Donkey Kong Jr. Math (NES, 1-2 players, rated E for Everyone, 500 Wii Points): Learning can be fun, especially when you play along with Donkey Kong Jr. Practice addition, subtraction, multiplication and division by directing Junior, a cute little monkey who must climb up and down vines to collect numbers and math symbols to solve the math problems his father gives him. Compete with a friend in a race to solve problems in Game A or add more challenge with Game B. Of course, you can also practice on your own. This game is perfect for younger players who are looking for a fun and easy way to develop their math skills.

Landstalker: The Treasures of King Nole™ (Sega Genesis, 1 player, rated E for Everyone – Mild Fantasy Violence, 800 Wii Points): After hearing of the legendary treasure of King Nole, the elvish treasure hunter Nigel undertakes a quest to gather various pieces of the famed loot. His journey takes him through Mercator Island’s villages, caves and dungeons that hold King Nole’s riches. Along the way, he’ll have to help the inhabitants of the island while fighting against the treachery of Duke Mercator, who is searching for the treasure as well. A variety of obstacles and foes will try to deter Nigel, who must use all his wits and skills to defeat Duke Mercator and uncover the secret of King Nole’s treasure.

Bonk 3: Bonk’s Big Adventure (TurboGrafx16, 1-2 players, rated E for Everyone – Comic Mischief, 600 Wii Points): The hard-headed hero is back for more side-scrolling action in the third installment of the popular Bonk series. It’s up to Bonk once again to thwart the plans of the relentless evil King Drool. There are seven rounds scattered throughout the Dinosaur Kingdom, each one filled with fun contraptions and comical enemies. Grab a Flower Copter or exchange 16 Smileys at the end of each round to play up to eight different bonus stages. Or you can change the size of Bonk by grabbing the new red or blue candy items. Depending on the situation, you can change your size to bonk your way through a dead end or to get a hard-to-reach item. And if that’s not enough, you can grab a friend and put your heads together to defeat King Drool in the new two-player mode.