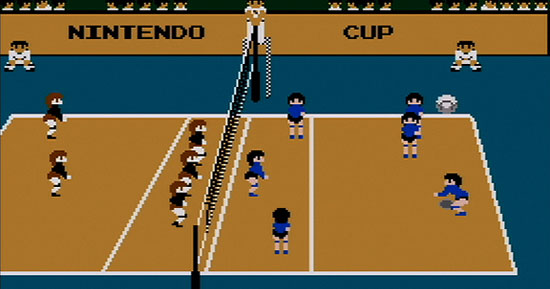 Topping last week’s huge release was going to be tough for Nintendo. What could you possibly release as a follow-up to Power Golf, the “greatest game ever”?

The marketing machine at Nintendo is in high gear going into the holidays, and they’ve done it again — the Nintendo Entertainment System genre-defining classic, Volleyball (NES, 1-2 players, 500 Wii Points) is available on the Wii shop channel today. Itagaki hasn’t come right out and said it, but it’s obvious that the Dead or Alive Xtreme series would not exist today if it wasn’t for this seminal sports classic.

And thank God for another “shmup” coming to the Wii Shop Channel; Konami’s Axelay (SNES, 1 player, 800 Wii Points) and its killer score are in the house. If you’re into “comic mischief,” then maybe Blue’s Journey (NeoGeo, 1-2 players, 900 Wii Points) might be right up your alley.

There’s the jump, and right beyond it is Nintendo’s fancy press release.

Winter vacation may be weeks away, but there’s no need to wait for a fun-filled escape. The latest additions to the Wii™ Shop Channel can take you to places as familiar as a gymnasium or as fantastical as faraway planets. Fans of sports games, space-age shooters and intergalactic action will all find something to love in this week’s lively lineup.

Volleyball (NES®, 1-2 players, rated E for Everyone, 500 Wii Points): Step onto the court in one of the first volleyball games ever made. Select either the men’s or women’s competition, choose from one of eight available countries to represent, and prepare for some intensely fun game play. The straightforward controls include all the moves you’ll need to effectively direct your six-person team. Take some time mastering them in the training mode, though, because you’ll need all the practice you can get when competing against challenging computer opponents. If you feel like some multiplayer action, take on a friend in the two-player mode and see whose skills are more polished. Block, set and spike your way to victory.

AXELAY® (Super NES®, 1 player, rated E for Everyone – Mild Fantasy Violence, 800 Wii Points): Mysterious aliens have invaded the Earth-like planet of Corliss, slowly draining the planet’s resources. Take control of the prototype Axelay ship and use its wide range of advanced weaponry to battle enemy forces. Play through multiple stages of action —from other planets to space stations — all on your way to destroying the alien headquarters. You are Corliss’ last line of defense, so be careful not to be too distracted by the excellent graphics (including great scrolling effects) and rocking music. Pilot the Axelay using Konami’s famously tight play control and experience what many consider to be a classic of the shooter genre.

BLUE’S JOURNEY (NEOGEO, 1-2 players, rated E for Everyone – Comic Mischief, 900 Wii Points): The planet of Raguy has been invaded by the Daruma tribe, changing it from a beautiful and peaceful place into one filled with pollution. Released in 1991, this horizontally scrolling action game tells the story of an insectarian named Blue and his quest to save the planet and keep its inhabitants from being turned into slaves. Use Blue’s main weapon, a leaf, to flip enemies onto their heads and then throw them at other members of the Daruma tribe, defeating anyone in your way. Additional weapons, such as bombs and boomerangs, are also available, or you can collect flowers to purchase other special items like honey or swim fins. Blue also has the special ability to change his size at will — if he’s too big to fit in a particular area, then shrink him. The bright, colorful graphics, combined with lots of hidden items to find, ensure an enjoyable experience with plenty of replay value. Help Blue muster all his strength and eliminate the Daruma tribe.