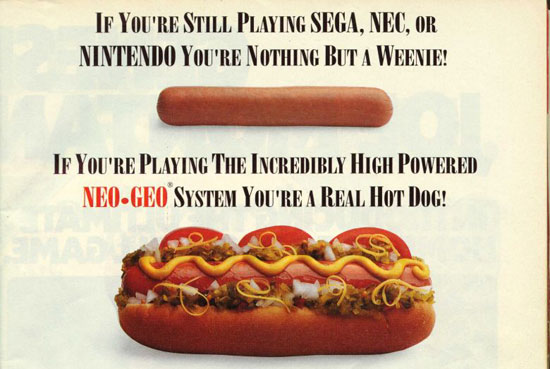 We all knew it was coming, and IGN even spilled the beans a few days early: Neo Geo titles have finally arrived on the Virtual Console!

So, which Neo Geo fighting game will you be downloading this week? Full press release (along with some fancy descriptions to help you make up for your mind) after the jump.

Hard-core gamers will especially appreciate the vibrant, arcade-quality graphics and the ability to finally play games they might have missed during the NEOGEO heyday. The first NEOGEO offering includes three fighting games that are a mix of familiar franchises and cult classics. Dive in and check out the deep game play, diverse characters and special moves and combos.

FATAL FURY (NEOGEO, 1-2 players, rated T for Teen – Violence, 900 Wii Points): Released in 1991 and one of the longest-running series in the fighting-game genre, this title introduced players to Terry Bogard, Andy Bogard and Joe Higashi. Select one of the three and visit many locations as your chosen fighter engages in numerous street fights around the fictional city of South Town. If you’re good enough, you’ll eventually take on Billy Kane and then his boss, the notorious crime lord Geese Howard. Use each fighter’s own finishing maneuver and battle in two different planes on the screen, one in the foreground and the other farther away in the background. The game also features a two-player mode that is well known for its unique setup, which allows fighters to both fight and help each other. Do you have what it takes to win the King of Fighters tournament?

WORLD HEROES (NEOGEO, 1-2 players, rated T for Teen – Animated Blood, Violence, 900 Wii Points): A fighting game released in 1992 featuring eight characters, including Hanzo, Janne and Rasputin, modeled on historical figures from throughout the ages. The fighters compete against each other to become the world’s toughest combatant, with players using a setup consisting of only three buttons (one each for punching, kicking and throwing). Adding to this unique system is the fact that the strength of your offensive blow depends on how long the button is pressed and held. Along with regular match styles, Death Match mode is also available and features mines, electrified ropes and other dangerous objects in the battle arena that can change conditions during the fight or damage players. Enjoy the wide range of combat forms as you take on history’s best!

ART OF FIGHTING (NEOGEO, 1-2 players, rated T for Teen – Animated Blood, Violence, 900 Wii Points): This fighting game, released in 1992, began the story of the Sakazaki family and Robert Garcia, further developed in two later sequels. Yuri Sakazaki has been abducted by Mr. Big to punish her father, Takuma, and her brother, Ryo. To rescue her, Ryo and Robert must take on numerous enemies around South Town, eventually reaching the mysterious Mr. Karate. The passion of the game’s creators is evident in the unique game-play elements introduced. These include an energy gauge that is depleted every time a fighter uses a special maneuver, Desperation Attacks that are usable only when a fighter’s health is low and camera zooming that adjusts on the fly as fighters move around the stage. All these features ensure that players use strategy and tactics, rather than simply mash buttons. Adding to the mix are little touches such as characters showing cuts when they are injured and voice-over samples during cut scenes. Can you perfect the art of fighting and save Yuri?