What are Nintendo doing to me? I’ve been stressed out all morning, eagerly anticipating the press release announcing this week’s Virtual Console releases. It’s nearly noon over here on the East Coast — my heart can’t handle it.

Finally, it has arrived and the good news is that there’s no garbage coming to the Wii Shop Channel today. Kirby’s Dream Course (Super NES, 1-2 players, 800 Wii Points), Devil’s Crush (TurboGrafx-16, 1-2 players, 600 Wii Points), and Shining Force (Sega Genesis, 1 player, 800 Wii Points) should all be available for download as I’m writing this. Way to drop the ball on allowing us to break the big news, Nintendo.

You know, I’ve been writing about these releases every week for months now, and I’m getting the sinking feeling that you guys are caring less and less as time goes on. Or maybe that’s just me. Hit the jump for full game details and a picture of a Predator made out of scrap metal. 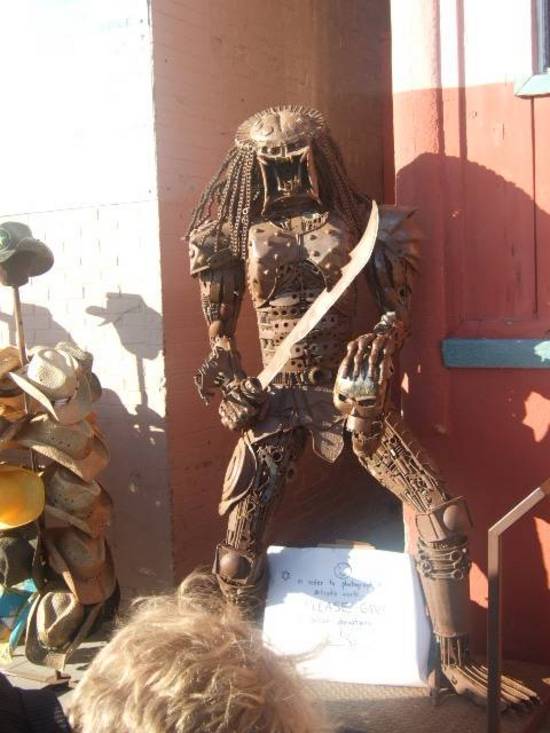 Ah, the three classic summer leisure activities: golf, pinball and battling hordes of evil creatures. Luckily, it’s Monday and once again Nintendo has you covered. Players can hit the crazy links with the spherical Kirby, become a pinball wizard or just enjoy an afternoon of helping good triumph over evil. So pour yourself a tall glass of lemonade and settle in for some classic gaming fun.

Kirby’s Dream Course™ (Super NES®, 1-2 players, Rated E for Everyone, 800 Wii Points): Step up to the tee for the wackiest golf game of your life. This one- or two-player game features a floating golf course in the sky. High above Dream Land, players can pitch and putt the ever-popular puff ball, Kirby, through a maze of three-dimensional obstacles on a zany checkerboard course. Players must aim for the multitude of enemies that are spread throughout each fairway. Kirby must hit all the enemies to make them disappear, and the last one becomes the hole. Sink Kirby into the hole to advance to the next stage and clear all 8 courses – 64 holes in all.

Devil’s Crush (TurboGrafx16, 1-2 players, Rated E for Everyone – Animated Blood, Mild Fantasy Violence, 600 Wii Points): Devil’s Crush is the exciting sequel to the hit pinball game Alien Crush and features even smoother ball movement and enhanced special effects. Shoot the ball onto the board with the Devil Shooter, then use flippers and nudging to keep it in play and rack up a high score. Complete certain conditions to play up to six different bonus stages. Get a “Perfect Clear” on those to earn a huge amount of points. The game’s ominous theme is enhanced by its enemies: wandering skeleton knights, sorcerers and even a giant face that changes from a goddess to a sinister serpent.

Shining Force™ (Sega Genesis, 1 player, Rated E for Everyone – Mild Fantasy Violence, 800 Wii Points): In ages long forgotten, Light fought Darkness for control of the world. Finally, the Ancients defeated the evil ruler of the dark forces known as Dark Dragon and cast him into another dimension, though he vowed to return in 1,000 years. As time passed, all memory of Dark Dragon was buried, and the land of Rune enjoyed 10 centuries of peace. Yet, as promised, the dark ruler returned, along with hordes of evil creatures that ravaged the land. As chaos erupted, several strongholds of Good still held out, awaiting a hero who could wield the Powers of Light.