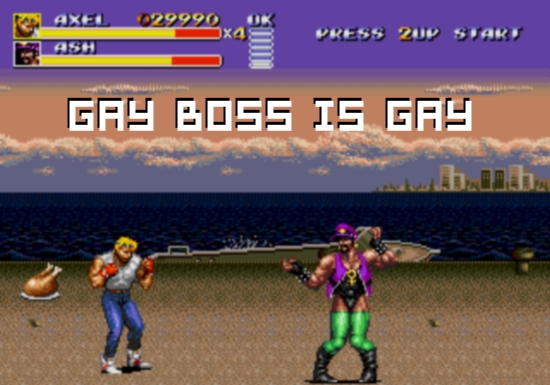 Another Monday, another update to the Wii’s Virtual Console. Whether you want to take on the role of a creepy pink blob, a cyberpunk crime fighter or another obscure TurboGrafx character, the VC should have something for … well, some of you I suppose.

This week’s selection of ROMs for sale provide a mix of puzzling and violence, with the release of Kirby’s Avalanche (SNES, 800 points), Streets of Rage 3 (Genesis, 800 points) and Legend of Hero Tonma (TurboGrafx16, 600 points). To be honest, my only experience with any of these games is Streets of Rage 3, which I remember looking very classy, but nothing beats the first one — if only for the fact that one of the bosses is blatantly The Ultimate Warrior.

One thing you may know Streets of Rage 3 for is its inclusion and subsequent removal of Ash, a bare knuckle fighting, blatantly stereotypical gay boss. Although taken out of the Western version, a Game Genie could resurrect him as a playable character, making Sega the first game company to include the option to play as a homosexual. I somehow doubt he’ll put in a Wii appearance.

Hit the jump for the official press release, as always. Any of this week’s selection catch your eye? Let us know if your hard-earned Wii points will be taking a hit today.

When you take on a challenge, it’s helpful to know your goal. Are you trying

to bury an opponent under colorful boulders, defeat the evil Syndicate’s
lifelike robots or rescue a princess? Maybe all three? Well, you can rest easy
knowing that this week’s diverse selection from the Wii Shop Channel is here

to help you take care of all the above.

can be purchased in the Wii Shop Channel or at retail outlets. This week’s new
games are:

his enemies to put your brain to work in this fast-paced puzzle game. Players
take control of Kirby and match wits with well-known enemies from the Kirby
series (including his archrival, King Dedede) in an effort to win the First

Annual Dream Land Avalanche Competition. The simple-but-addictive game play
revolves around brightly colored blobs and boulders. When the right amount of
matching blobs are stacked, they explode and rain down on your opponent’s

field of play. Repeat this until your screen is clear to move on to the next
round. But be careful—the farther you advance, the faster the blobs fall and
the smarter the opponents get. Are you good enough to help Kirby become the

Streets of Rage™ 3 (Sega Genesis, 1-2 players, rated E 10+ for Everyone 10 and
Older – Violence, 800 Wii Points): Just when you thought the world was safe
from the Syndicate and its shady leader, Mr. X, they have returned to torment

the city once again. Mr. X has developed lifelike robots to take the place of
various city officials so he can be in complete control. Now it’s up to our
old heroes Axel, Skate and Blaze to stop the threat with their amazing

fighting skills. With more weapons and combat moves, as well as secret
characters and various endings, this return to the streets is one you won’t
want to miss.

Cartoon Violence, 600 Wii Points): LEGEND OF HERO TONMA is an action game that
puts players in control of the magic-user Tonma, whose role – as was typical
for game heroes of the day – is to travel to another world and save the

princess. Fight your way through seven stages using Tonma’s jump ability and
shot power. Collect power-ups and barriers to grow in strength and pummel your
enemies. Bring that strength to the end of each stage to face off against and

defeat the menacing bosses that aim to keep you from the princess. This well-
detailed game’s comic visuals and feel will have players wanting to come back
for more frantic and exciting action.