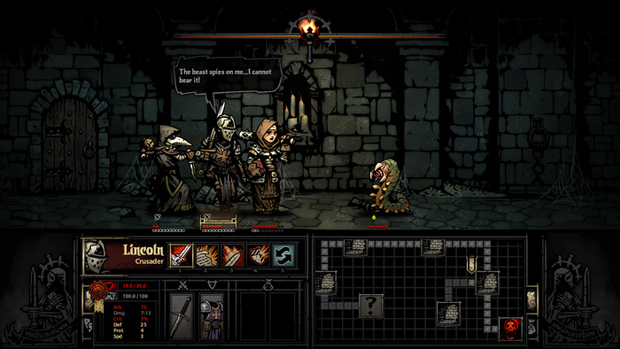 Fear is the mind killer

I must’ve missed hearing about Darkest Dungeon originally as there’s no way I would’ve seen that footage (embedded again above) and gone on with my day like nothing had happened. Now, months later, this turn-based dungeon crawler has reappeared with more gameplay details and a Kickstarter on track to meet its funding goal early in its campaign.

Besides the art direction, it’s words like “uncompromising” and “unforgiving” that have me interested in Darkest Dungeon. Your characters may be heroes, but they aren’t always heroic — their stress levels, among other psychological factors, will need to be taken into consideration. Another layer of strategy to manage in what’s looking to be an already challenging game.

The footage we’ve seen represents nine months of full-time development and Red Hook is targeting January 2015 with an initial release on PC/Mac, followed by possible ports to consoles, tablets, and 3DS. Textbook example of how to make a strong Kickstarter pitch.