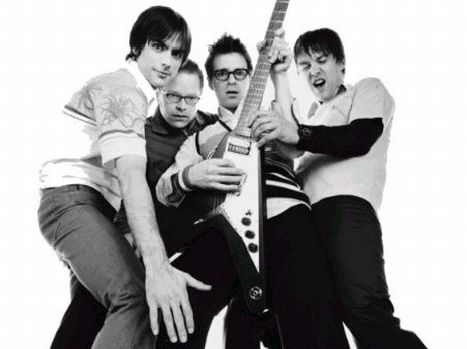 Is it okay that I’m ten times more excited about the access I will soon have to download any track from The Pixies’ excellent Doolittle for my Rock Band enjoyment than I am about three new Weezer tracks from their self-titled “red album”? Not that I don’t dig Weezer … but let’s be honest here, I have what might be (nicely) described as a “borderline unhealthy” obsession with The Pixies. Total bias, hard at work.

If you are digging Weezer’s recent self-titled release, however, you will be happy to know that come June 24th, you can snag “The Greatest Man That Ever Lived,” “Dreamin'” and “Troublemaker” for $1.99 apiece (160 Microsoft points) or $5.49 for the three-song pack (440 Microsoft points).

I may download some of those eventually, but I have admit, I’m disappointed not to see “Pork and Beans” on there. Sigh. Too bad for me.

Harmonix and MTV Games have announced their next online pack, new tracks
from WEEZER’s sixth studio release, WEEZER (Red Album), available on June
24th.  The critically acclaimed LA-based, guitar-pop quintet contribute the
following three tracks; “The Greatest Man That Ever Lived,” “Dreamin'” and
“Troublemaker” to the Rock Band™ Music Store of downloadable content.  Each
track will be available for $1.99 per track (160 Microsoft Points for Xbox
360) or $5.49 (440 Microsoft Points for Xbox 360) for the three-pack.

Additionally June 24th will mark the third album added to the Rock Band
Music Store catalog of downloadable content: the critically acclaimed
Pixies’ Doolittle.  The additional fourteen tracks join “Wave of
Mutilation,” which was included on the original Rock Band™ game disc.  Each
track will be available for $1.99 per track (160 Microsoft Points for Xbox
LIVE(R) Marketplace for the Xbox 360(R) video game and entertainment system from
Microsoft) or $18.99 (1520 Microsoft Points for Xbox LIVE Marketplace for
Xbox 360) for the album.

“The Greatest Man That Ever Lived”

“There Goes My Gun”

With the addition of these tracks there are now more than 200 tracks
available to date via disc and download purchase (complete list of tracks at
HYPERLINK “https://www.rockband.com/dlc“https://www.rockband.com/dlc).
Rock Band™ continues to fly off shelves and satisfy music fans and gamers’
voracious appetite for rock as more than 12 million downloads have been
purchased since its launch on November 20, 2007. The Rock Band™ Music Store
allows players to preview and purchase downloadable individual music tracks
and packs from the vast selection of offerings available to date without
ever leaving the game as they build their own custom Rock Band™ library.