Depressing, but that’s what it’s going for

Most video games about war focus on the glory of combat, vanquishing an evil foe through prowess and cunning. This is even truer for tabletop games; I can’t think of many games about war that aren’t about how cool it is to dominate opponents. This War of Mine takes a more profound look at war by examining it from a civilian perspective. I spent some time with This War of Mine: The Board Game, and it emulates that same experience well.

It presents a bit of a conundrum for tabletop gaming. Getting a group of adults together to play board games on a regular basis is a hard enough sell, but usually the promise of lighthearted laughs and relatively clean snack foods helps. I’m not sure how often I’ll get my group together so we can sit around the table and contemplate the horror and futility of the reality of war. 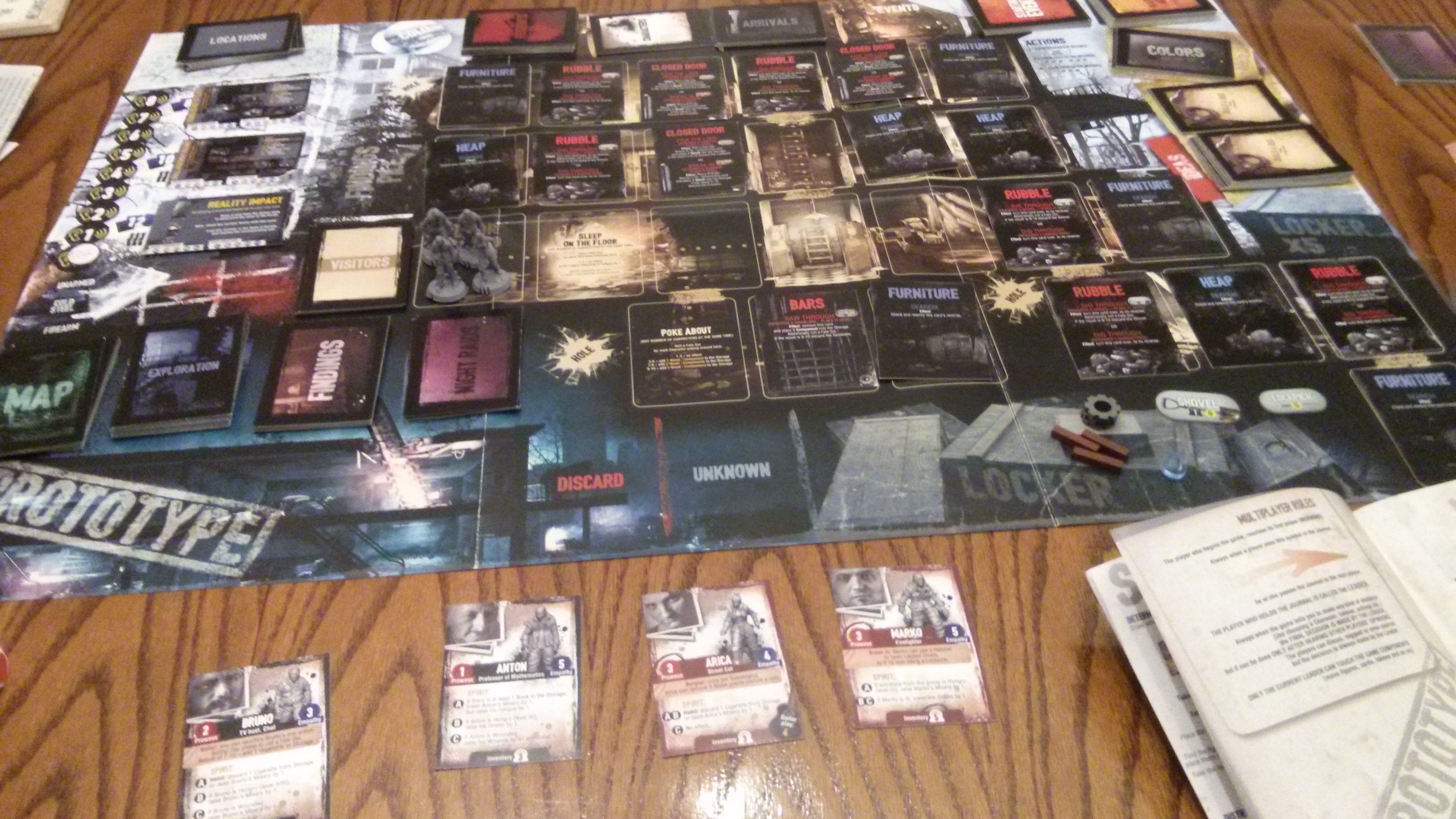 It’s a strange case, because This War of Mine does what it sets out to do well. It has the trappings of a classic worker placement game like Agricola, where there are several things players will want to do, but only enough actions and resources to do a fraction of them. Except, instead of choosing whether to plow a field or build a fence, it’s choosing whether to turn an herb into medicine to stave off illness or into a cigarette to keep from plunging into debilitating despair.

It realistically represents some of the risks a civilian in this extreme situation would have to consider. During the first game I played, our scavengers were pressing their luck in unknown territory when they were beset by two hostile strangers with bladed weapons. A brawl broke out and we were able to beat them to death, but not before they could inflict mortal stab wounds to all three of the characters under our control. Everybody on the scavenging team died. We lost. It was only the second round. When I went back and played a full game to completion solo, I was much more careful to avoid encounters.

It tells a story, both through the text-heavy Book of Scripts, and through emergent gameplay. In the second game I played, one character was both deathly ill and starving. As is common in This War of Mine, I had some food for the group but not enough for everybody. Do I do everything I can to save this guy’s life, or do I feed somebody else who has a better chance of survival overall? I sat and pondered the situation for several minutes before I decided to go with my sympathetic side, even if it was the tactically disadvantageous move. I fed the man. It kept him alive for another few days, but he did end up succumbing to his sickness.

On the downside, there are some concerns that come up from a gameplay perspective. The first is a simple one: length. I spent about eight hours over the course of two days playing one game alone. That time will probably decrease with experience, but it will also increase with multiple players discussing strategies and with the fully fleshed out Book of Scripts to read from. Included in the prototype was a crude game save sheet — basically requiring players to write down the game state to set up later. The prototype guide mentions that a mechanic for shorter games is in development, but I was not able to try it.

Another aspect that might be a hurdle for some groups is the way cooperative play is implemented. Nothing about the gameplay scales up or down or changes in a meaningful way whether it’s being played solo or with six. The only difference is the rulebook gets passed around the table with each player having a turn at being in control. There isn’t exactly downtime since tactical discussion is always open, but it is susceptible to the common alpha gamer problem many cooperative games suffer from. It seems like This War of Mine was developed as a single player game and co-op rules were added as an afterthought.

My biggest concern might or might not be a problem in the end, but it all depends on how much time, effort, and talent goes into the Book of Scripts. The prototype only included a few excerpts, but the full game promises an enormous amount of text, telling a different story each time it’s played. Some scenes were emotionally powerful, like when the scavenging group stumbles onto a television showing the decadent, carefree situation of a more prosperous country while they are trying to scrape together enough food so they don’t starve to death. One even gave me chills, when a distressed father asked for bandages for his wounded daughter, who later died. But most passages currently have the cadence of being written by a non-native English speaker. It’s going to be a huge undertaking to keep the starkness of the stories while maintaining a more natural flow. I hope Awaken Realms is up to the challenge. 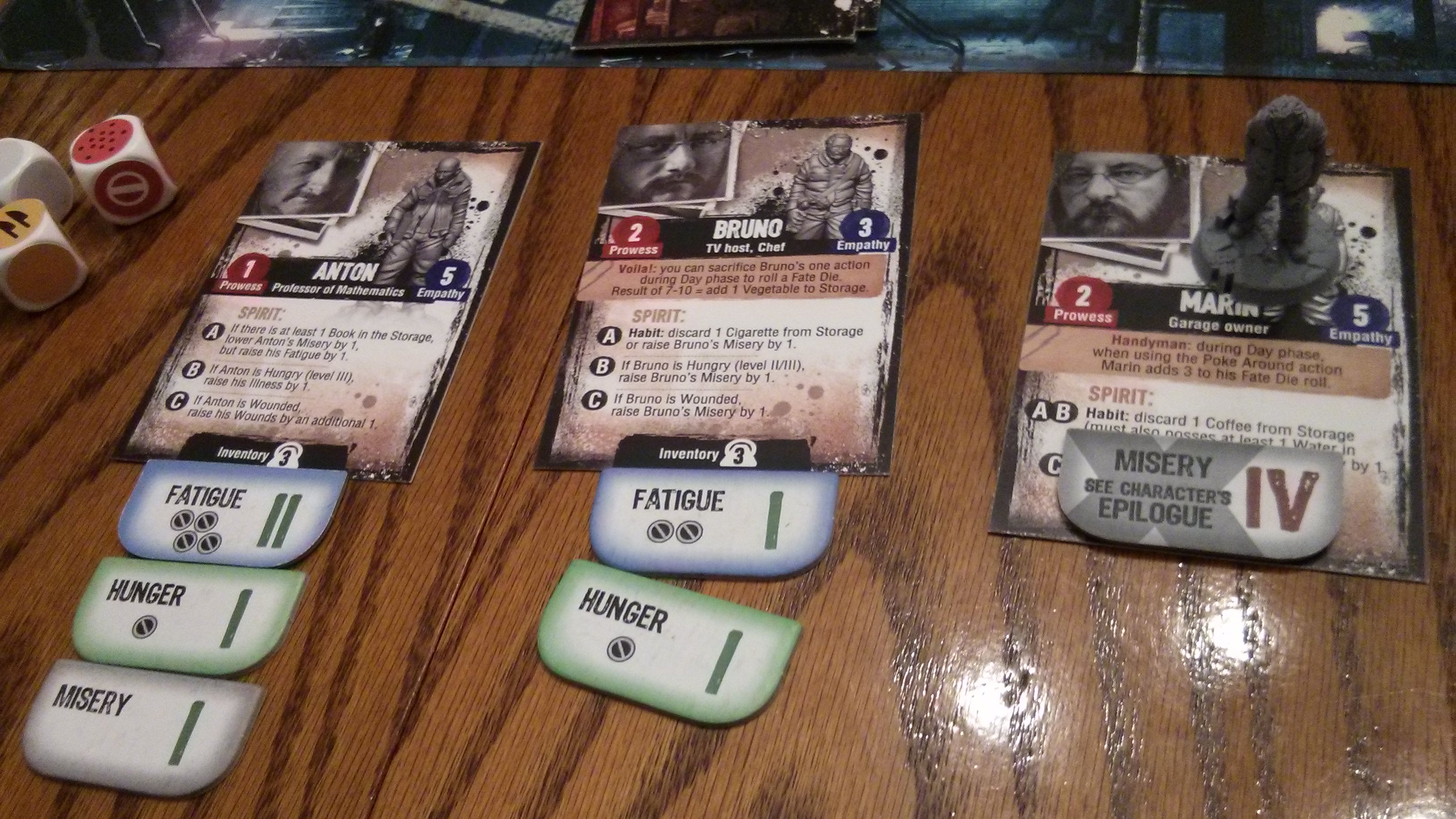 Overall, I’m impressed with This War of Mine: The Board Game, but I’m not sure about its mass appeal. From an intellectual perspective, it’s commendable to take a serious look at something so many games trivialize. From a “let’s get together and shoot the breeze while we push some cardboard tokens around the table” perspective, it wouldn’t be my first choice. But hey, it’s already made almost half a million dollars on Kickstarter, so maybe I’m the weird one.

It’s mechanically sound, it promises deep and impactful narrative, and it feels important, but I’m reluctant to say my time with it was fun. Even in victory, where “only” half of my characters were dead or gone, I couldn’t help but feel a little depressed about their situation. But then, that’s exactly the point This War of Mine is trying to make.