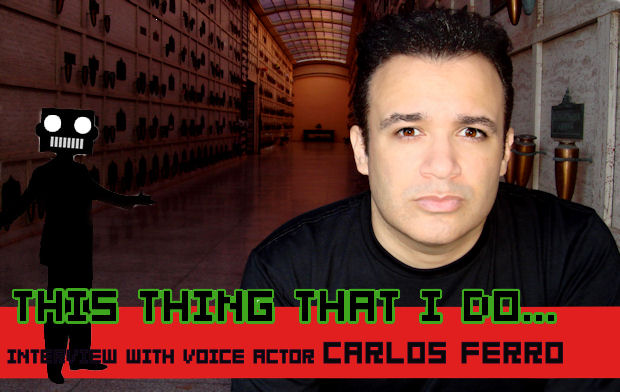 [“This Thing That I Do” is a feature on Destructoid where I interview people who work in the gaming industry or people who have achieved something noteworthy to give us some insight into how it all works.]

Voice acting in video games has become more and more of an important focus in the industry, and I’m sure that most will agree that good voice acting can add a lot to the appeal of a game — I still completely melt whenever Alistair talks in Dragon Age: Origins.

With this new increase on the importance of voice acting, the industry is starting to see the development of actors who now specialize within gaming and are becoming celebrities within this world.

Carlos Ferro is just one of these gaming celebrities, and if you ever see him at an event you will understand why I happily apply the term celebrity to him — he is never seen far from a group of fans wanting pictures or autographs. While he has voiced numerous roles which without your realizing — Cuban solders in Call of Duty: Black Ops, Mastodon/Ascended in Command & Conquer 4, and numerous other small rolls from games including Saints Row 2, Quantum of Solace, and Uncharted 2 — he is famous for some pretty big rolls. Carlos has recently voiced Leonardo da Vinci is both Assassin’s Creed 2 and Brotherhood, Don Carleone in The Godfather II, and most famously Dominic Santiago in all three Gears of War games.

Carlos Ferro is charming, suave, and a pretty serious geek himself, making him the perfect person to interview about what he does as a voice actor, why he loves it, and how he got started.

As some people have probably guessed, you have been in acting for a while. Can you tell us what was the first bit of work you did for the video games industry and what was it like?

I was fortunate enough to work on some PS2 and original Xbox titles at a time when, as I’ve said before, the character voices tended to be a little more over-the-top. Still, it was exciting and inspirational to have the opportunity to work alongside some of my acting heroes in the booth.

One of your biggest voice acting roles has been Dominic Santiago in Gears of War. Can you tell us some of the other roles you have done and what has been the best one to work on so far?

I’m also the voice of Leonardo da Vinci in Assassin’s Creed 2 and Assassin’s Creed: Brotherhood as well as Michael Corleone in The Godfather II. It’s difficult to say that one has been “the best” to work on, but Dom Santiago in the Gears of War franchise might be.

So let’s say you are still working on Gears of War 3, what is a typical day for you?

Honestly, first, I make sure that I’m rested and ready to go on the day. Then, I show up and immediately review my script and go over any notes or concerns any of us might have. This is followed by the designated recording session with or without other cast members (it varies). After all the recording and thrashing of vocal chords, I go home. 🙂

How do you think people within the games industry see what you do as a voice actor? Do you feel there is enough appreciation for what good voice acting can do for a game?

I believe the industry has grown to appreciate what we do. I like to think that, anyway. As a gamer, I’ve always appreciated strong and compelling voice acting in my games and it seems others do also.

What are the fans like? Are they really supportive or have some people been really offensive? Any example you want to share with us?

I love the fans. I’ve always felt like one of them and their support and passion means the world to me. I’ve never really had an offensive experience. On the contrary, I tend to have people thank me for taking such care of the characters they love so much.

Any future plans or anything you are currently working on that you want to share with us or is there something you really wish you were working on?

My work tends to keep me sworn to secrecy about things coming out, but Rango the Video Game was just released — I play the Mariachi Owl, “Senor Flan,” who sort of narrates the action and gets to mercilessly tease Johnny Depp… er… Rango.

Also, I’ll be on the road this year DJing under the name “The Domfather” (thanks to Destructoid’s own Nick Chester for that moniker). I’m headlining the Gamers Gone Wild Party during PAX East in Boston March 11th. Later dates to be announced via my Twitter: @RealCarlosFerro

And of course, Gears of War 3 releases September 20th, and I must say to all, “you ain’t seen nothin’ yet.”

Finally, can you give any advice for those that wish to follow in your footsteps?

As I’ve always said, be a good actor first. Sharpen your tools so that you are a qualified craftsman. Show biz has an element of luck to it, so be as prepared as possible for when opportunity presents itself.