A story of Miyamoto, murder, and millionaires

There’s been talk of a Tetris film for years, but from the looks of it, the critical failure of movies like Pixels and Battleship may have slowed Hollywood’s enthusiasm for adapting toys and games that have no established narratives of their own. In this case, that’s actually a shame, because the story of the development and localization of Tetris is quite fascinating. With Tetris: The Games People Play, writer and artist Box Brown recently took that story to comics, and it’s one of the best novels (graphic or otherwise) that I’ve read in years. If you’re headed back to school this month, you should ask your teachers if they might add it to their curriculum. It would work in art, history, sociology, computer science, or even psychology courses, depending on how cleverly the instructor handles the challenge.

Part of what makes the book work is how it connects so many unrelated parts together to form a greater whole. Yes, that’s also what happens in a game of Tetris, but no, Box Brown isn’t hammy enough to actual spell that out in the comic itself. Instead, he subtly puts each seemingly random piece of the Tetris saga next to its appropriate partner as it naturally presents itself to the equation.

Chronologically, it all starts with the creation Senet, an ancient Egyptian game of strategy. We then move forward to the formation of Nintendo, the competitive card playing company, founded by artist Fusajiro Yamauchi in 1889. From there, Shigero Miyamoto, the Sega Master System, Ronald Reagan, Blasteroids, Gunpei Yoko, Kurt Lewin, the Atari 7800, Mikhail Gorbachev, Judge Fern M. Smith, and of course, Tetris creator Alexey Pajitnov, all end up coming together in a chain of events that’s as unlikely as they come. All of them turning in just the right sequence eventually led to the release of Tetris for the original Game Boy, an event that changed the world of art and technology forever. 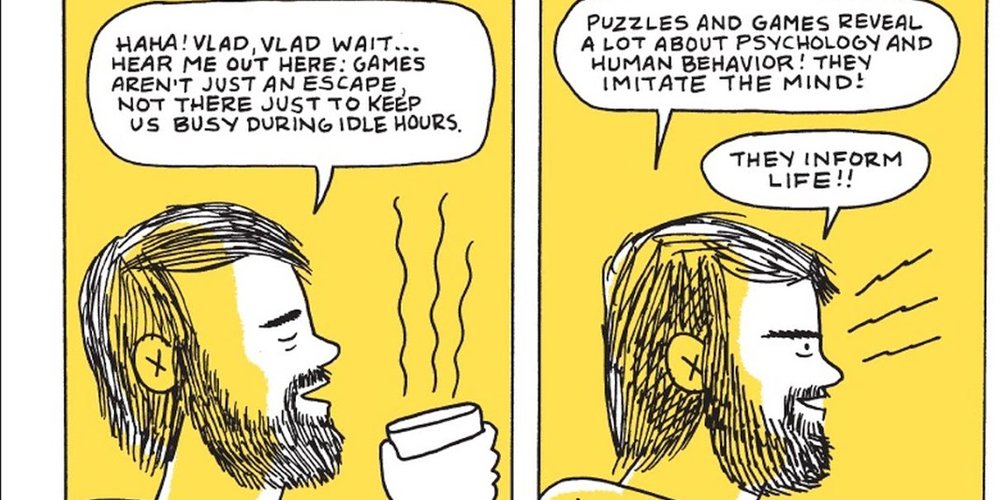 The book starts off with a subtle introduction to lay the groundwork for why we should care about Tetris. The game’s creator is painted in a charming, sympathetic light, all with the use of just black, white, and yellow. It’s a comic that would look right at home on the original Gameboy.

Then we’re given the explanation for why he, and so many of the rest of us, love video games so much. Though it’s not the first time they’ve been defined as such, the comic humbly lays out an argument for games as the fusion of competition and play that “imitate[s] the mind and inform[s] life,” with a capacity to activate our frontal lobe like few other things can. Tetris is one of the best in its class, because as Art Hawk once put it, it mirrors our experience of moving through time as we weigh short-term and long-term goals against each other, integrating who we are and what is happening in our lives now with who we were and what our collected past experiences have been.

Alexey was a computer scientist at the Moscow Academy of Science when he first stumbled upon this realization, but given his position in life, there wasn’t much he felt he could do with it. Things changed in 1984, when he first set out to create Tetris. It was originally an adaptation of Pentominoes, a game about fitting wooden blocks together. He made a few changes to the shapes, added the falling mechanics, and the goal of erasing lines as you go. This was not part of his day job. Communist Russia had tasked him to create artificial intelligence and voice recognition software, a pursuit that the country’s current government is still quite keen on. Alexey knew that his employers had no interest in the project. Even if they did, he would never make a cent off of his work. It would all be taken by the government. Yet, he still pursued the creation of Tetris, and was overjoyed when it found an audience among his friends and acquaintances. 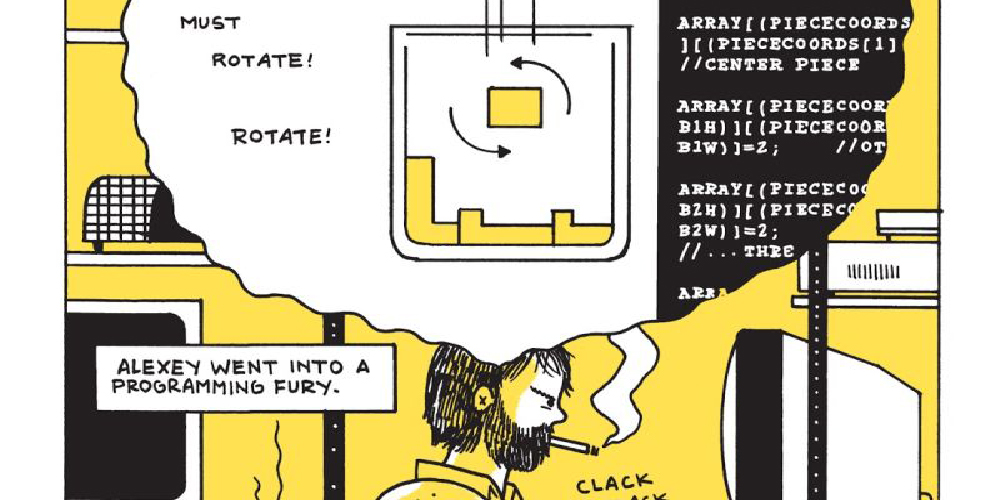 The game eventually made it to Hungry via floppy disk, where it managed to land at a trade show, all totally unbeknownst to Alexey. Robert Stein of Andromeda Software took notice, which lead to a knot of legal confusion that involved no less than three different game publishers. At one point or another, they all had good reason to believe that they had the rights to publish Tetris. This legal battle eventually resulted in at least one dead body, which wasn’t something I expected to see in this story. While it’s largely a straight forward character study about the various parties that make up the game industry, there are some stark highs and lows to be found along the way. The murder/suicide committed by Alexey’s former colleague and confidant was particularly striking.

Thankfully, it all ends on a high note, with Alexey freed from the ties that once restricted him from controlling the direction that Tetris takes next. That said, the story of Tetris is far from over. Even today, he’s puzzling out new ways to re-introduce us to his life’s work. Though Tetris: The Games People Play isn’t an official Tetris Company product, I have to imagine that Alexey would approve of how it manages to do just that. Regardless of how big of a fan you are of the game, this comic will allow you to contemplate it from an entirely new angle.

Summing up the conflicts between Art vs. Business, Luck vs. Fate, Love vs. Greed, and of course, Atari vs. Nintendo must have been a struggle, but with this book, Box Brown and Tetris manage to piece them all together with simplicity, clarity, and utility. It’s not quite the Understanding Comics of video games that I’ve been waiting twenty years for someone to write, but it comes as close as anything else has yet.