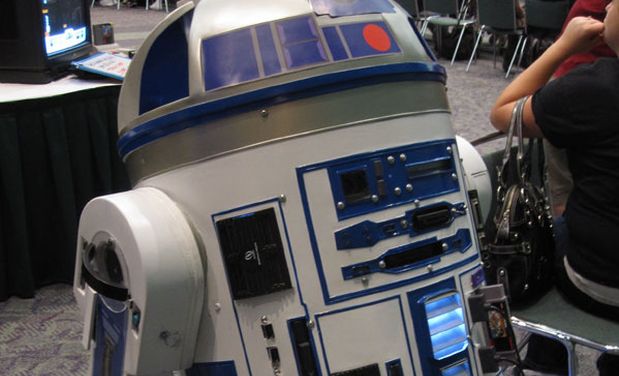 Just look at the R2D2 you see there in the photo above for a second. Do you see that SNES cart sticking out of one of his ports?

WHAT IS THIS GLORIOUS THING?

Kotaku posted images today (Via Fort90) of this incredible droid which has a total of TEN consoles packed inside him. Yes. Ten. Owning this would officially make you like, one of the coolest people in the universe. A mechanical engineering grad student named Brian M DeVitis came up with this mod, which made its public debut at this year’s PAX Prime.

So what’s in him? Well, he houses an SNES, an NES, an N64, a GameCube, A PS2, a PSP, a Dreamcast, a Sega Genesis, an Xbox, a computer and an Atari 1800. If you look at the photos on the creator’s website you can see the crazy AV plugs, which go on for days. And it has a projector built in, which plays something way cooler than Princess Leia’s distress message. You can just wheel him up to a wall and go retro crazy.

I want this! Bad!