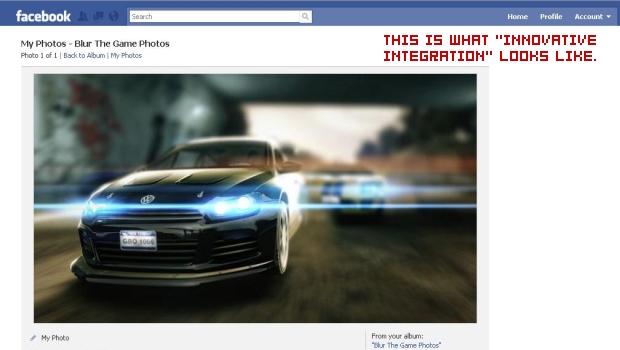 Gaming on Facebook is huuuuuge. It stands to reason then that games would want to work as easily as possible with Facebook, and so we receive Blur‘s Facebook integration. You can see what it will look like above and read how it will act in the paragraph below.

The game is going to feature a “Share” button that will let you challenge people to race, share achievements, post screenshots and basically quickly let you put things onto Facebook that people may or may not be interested in (most likely the latter). Judging from that screenshot it’s going to be all sorts of unexciting because it’s just a picture of Facebook.

I suppose I can understand the benefit of having a social network integrated into a game, but this is by no means something that excites me — at all. Is this a game selling feature for anyone, and if so, do you want to see it in all games?