For most media outlets, QuakeCon coverage consists of previews, interviews and panel recaps. Destructoid’s got you covered on that, but my main interest in visiting QuakeCon was in getting down and dirty at the more than 3,000 person LAN party going on far away from the press area.

After a couple nights in the LAN room, one-too-many energy drinks and meeting the ordinary people, I have returned out of a BAWLS-fueled haze to preach the gospel of QuakeCon. 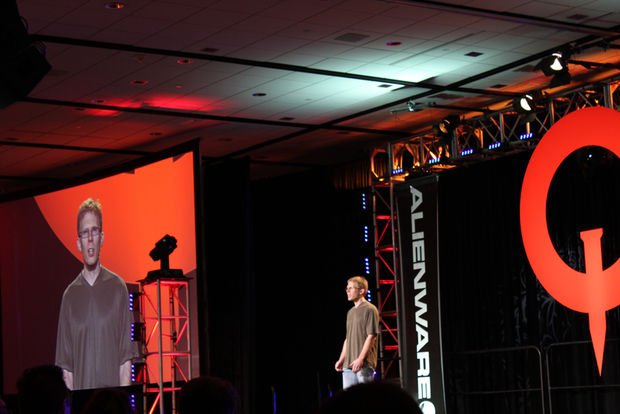 I don’t think anyone goes to QuakeCon for the panels, but it’s a nice bonus — especially, if you are getting your first-look at the Prey 2 and Skyrim E3 demos.

I love John Carmack. The man is like a machine. A rocket-building, id Tech-engine-making machine that communicates with the same precision he uses to create lines of code. However, I don’t think the guy cares about playing games as much as he loves creating games — fair enough, the same goes for some of the best artists in many fields of entertainment.

But, putting John Carmack by himself on the stage resulted in an opening keynote that left many press and public checking their pulse to make sure they were still alive. As it turns out, kicking off QuakeCon with a 45-minute discussion on texture-buffering didn’t get everyone’s adrenaline going.

The camera close-ups struggled to find audience members who weren’t on their cellphones, but eventually people woke up out of their coma to applaud when Doom was mentioned. I think it was more of a Pavlovian-impulse than a genuine reaction: “OMFGAFD DOOM? DOOM 4? TODAY? WHERE WHERE??? Ooooh….Doom 3 engine source code released, zzzzz”

To be fair, industry members who could keep up with Carmack’s speech seemed to have got something valuable out of it. If you think you may be one of those people and weren’t at QuakeCon, you can view the full video here. 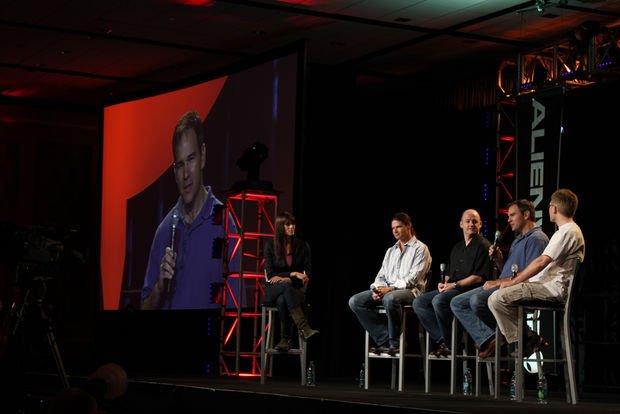 The other big keynote, 20 Years of id, was a rollicking, nostalgic trip down id’s history. As an id Software fanatic, who lists Masters of Doom as one of his favorite books, it was an entertaining and revealing look at one of the most influential developers out there. All four of the guys on stage were in their element and hysterical, throughout the panel.

I won’t ruin the panel, in case you want to watch the full thing here.

My favorite part had to be when Todd Hollenshead mentioned he was a Wolfenstein 3D addict. When questioned on what addicted him to the game, he simply responded “Turkey dinners.” 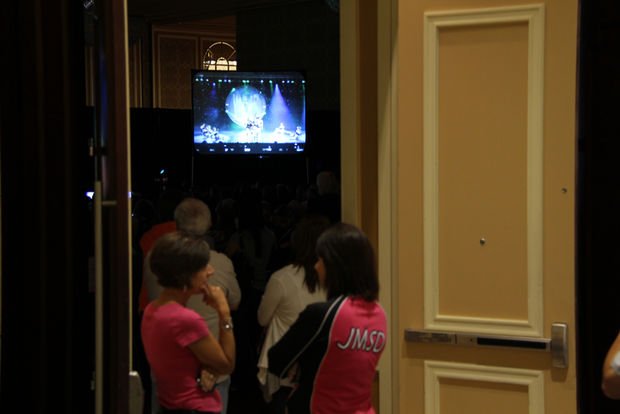 These weren’t just really little girls, either. They were uniformed dance groups with pink-black hair, bedazzled berets and uncomfortably skimpy outfits —  it was kind of like that dance group in Donnie Darko but even more creepy.

As you may have imagined, fat dudes with ponytails don’t mix well with pre-teen dance competition stars and their mothers, who are one step away from being as scary as those beauty-pageant moms. As a result, many awkward elevator rides were had during the conference.

I don’t think the hotel understood why these two groups weren’t a good mix until the third day of QuakeCon. All of a sudden, the area surrounding the Federation of Dance show was swarmed by hotel security telling any creeper to keep walking. I dream of a day when middle-aged, beer-gut QuakeCon attendees can live alongside the pre-teen dancers. 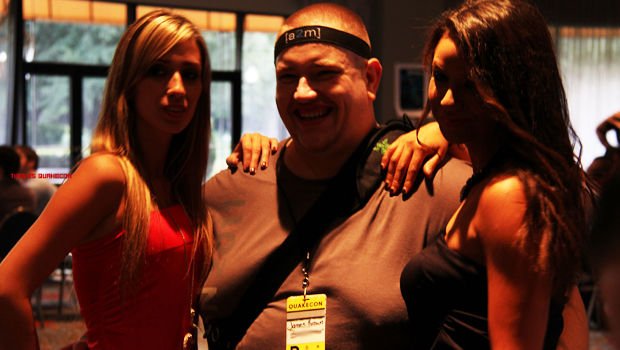 It’s uncouth to call out other members of the press, but….dude, WTF!?!

Throughout the show, I kept bumping into this guy. What bothered me about him wasn’t that he lounged around on the couches all day with his models (escorts?).  It also didn’t bother me when I rode an elevator with him and he told two pint-size pre-teen cheerleaders, who were obviously creeped-out by him, to “Watch out for pedobear, girls!” OK, so that bothered me a little.

What bothered me was this guy gets in, while some honest, good-hearted QuakeCon fanatics-turned-journos don’t. It’s people like this that give games press a bad name. Blogging about getting trashed at parties, hanging out with paid bimbos on hotel couches, and saying creepy shit to little girls is fine with me as long as you earned that position. But, to be honest, I don’t think anybody has earned that position.

With all that said, WHERE THE HELL WERE MY DTOID ESCORTS!!!!!? 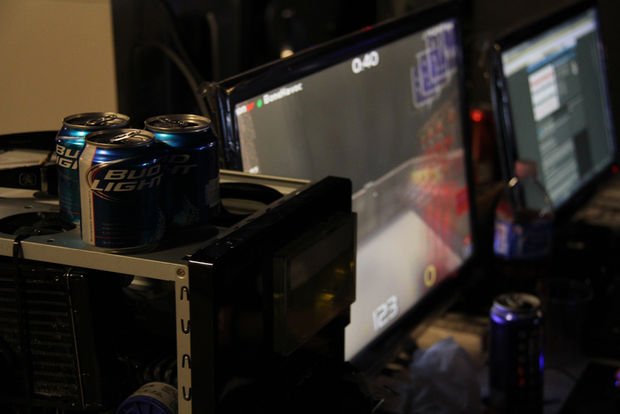 Have you been watching the latest season of Breaking Bad? You know Jesse’s suburban meth-house with the loud music, manic screaming, weirdos, disgusting amount of pizza boxes and, well, meth?

If you replace the meth with energy drinks and loud music with loud videogames, then you are pretty close to what QuakeCon’s BYOC (Bring Your Own Computer) room is like after midnight. 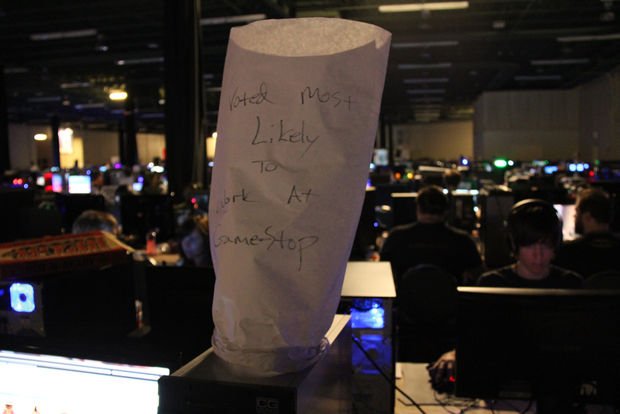 It was an absolute madhouse, where at any moment I feared I would be shived by a random passer-by like a prison inmate. It was as if the internet grew a mouth and shouted an endless, array of memes and insanities into the air.

Like the internet, behind the loud, obnoxious minority, you will find some really cool, kind-hearted people. Just walking around the floor, I met so many interesting people: young Minecraft fanatics, old dudes playing Unreal Tournament 2004 and guys offering to put their BAWLS in my mouth FOR FREE!!!

It’s possible that the loud ones’ antics had the purpose of keeping everyone awake, but after digesting three cans of BAWLS I felt like a meth-addict with an itch and all the shouting was only making the caffeine-overload worse.

I highly recommend going headfirst into the BYOC and talking to as many people as you can, but be prepared for the trolls that rest in the dungeon. Also, be prepared to pee over some guy who passed out next to the urinals. Hey, it happens! 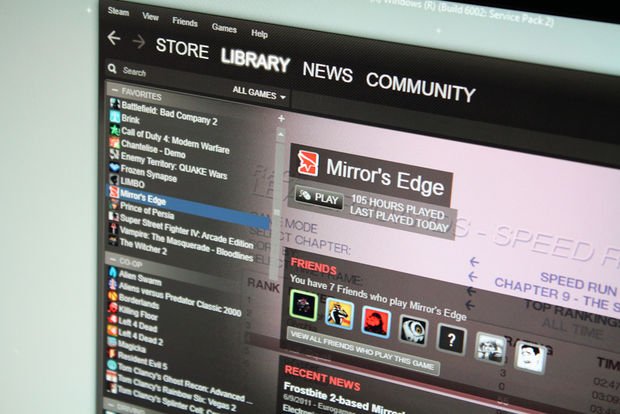 I’ve always imagined QuakeCon to be some sort of utopia where Unreal Tournament, Quake and Quake 3 (NOT Quake Live) LAN parties still exist. Sadly, this was not the case at this year’s QuakeCon.

One of my favorite things to do during the day was walk around the BYOC and check out the games people play. There was a surprising amount of Minecraft gamers, as well as Terraria fanboys and fangirls.
The most baffling thing at QuakeCon are the people who play single-player games. I saw lots of loners playing Dragon Age, Portal 2 and Oblivion throughout the show. I wanted to give them a hug and tell them they have a friend in me, but the pizza grease covering their shirts somewhat repelled me. 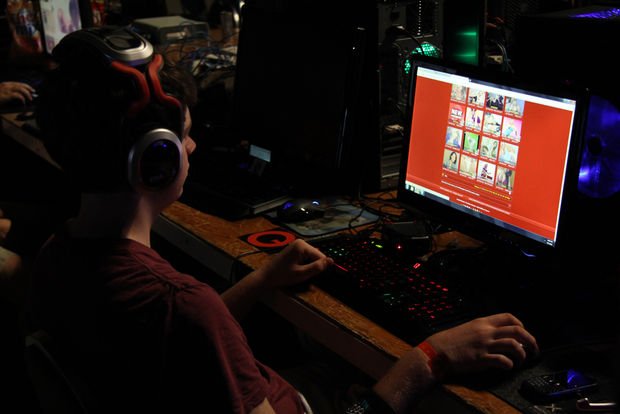 You also occasionally find guys looking at porn…in a room with 3,000+ people….I just….whatever, man. Whatever. 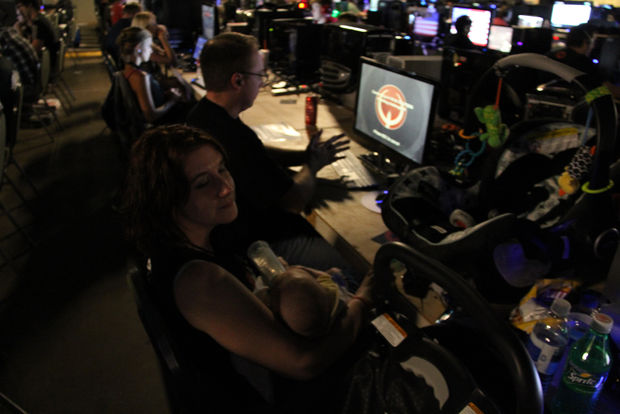 Given that QuakeCon has a history dating back over a decade, it’s to be expected that you’ll bump into some LAN warriors who now have families. It’s cool to see games, especially hardcore games at a hardcore event, being played by such an eclectic group of people.

QuakeCon has its share of your typical e-sports and WoW dudes, but look in any direction and you’ll see lots of females. I saw young girls playing Bejewelled next to their boyfriends, wives raiding caves while nursing their baby, and even grandmas playing Team Fortress 2. 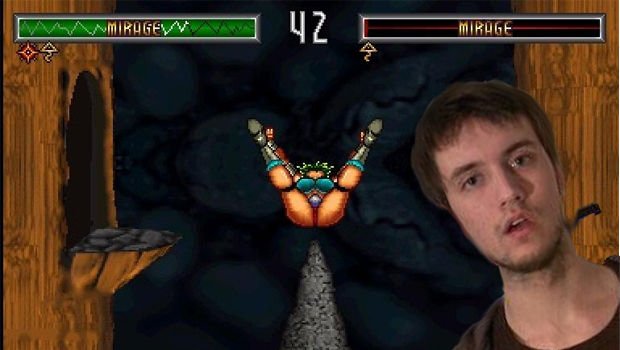 The Best Part of QuakeCon

My favorite thing about QuakeCon had to be this guy who brought out his 52-inch TV, dual-arcade stick and 9,000 MAME roms.

He called it the Classic Game Station and everyone was invited to pick a game and play against their friends. The owner was either really stoned or just acted really stoned, because he literally didn’t care what happened. He was just chilling next to the “cabinet,” playing Super Smash Bros. on a busted 13-inch TV.

I bumped into the Peanut Butter Gamer (whose videos I love) and challenged him to a best-out-of-three game. The first match was played on Time Killers. I ripped off PBG’ arm and beat him to death with it. After that, we switched to the game’s sequel, BloodStorm, and PBG owned my ass.

While playing, this impossibly drunk guy stumbled over and nearly knocked down the TV. Did the owner react? No. Throughout the match, the guy kept leaning on me and screaming “YOU RIPPED THAT GUY’S ARM OFF!!! OH MY GOD!!!” and “DUDE, THIS GAME IS CRAZY” over and over again. After he lost, he calmly said, “This game is whack” and walked-off. 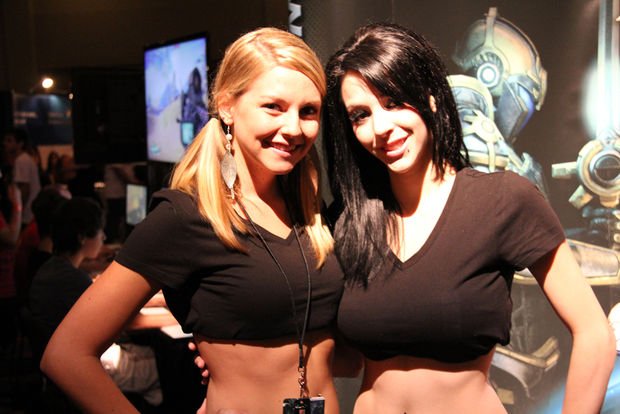