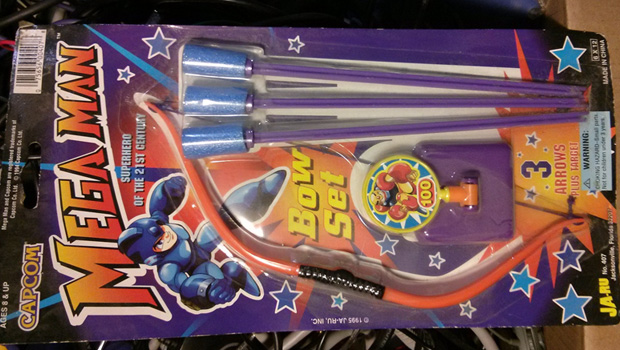 Network execs will go to some disgusting lengths to separate parents and their money. Just slap the logo of a popular cartoon on any ol’ crap and a kid will foam at the mouth until mommy and daddy break down and give in to the child’s demands. I remember those ass-backwards Ninja Turtles figures I used to own, like Slam Dunkin’ Don and Raph, The Space Cadet, and I’m mystified as to why my parents never slapped the stupid out of me.

But this… ugggggh! WHAT THE HELL IS THIS!? The action figures based on the Ruby-Spears Mega Man cartoon were fine and dandy, but at what point were Mega Man-branded bow and arrow sets a good idea? He is a robot. He has a gun for an arm. When in the show did he ever use a bow? It makes zero sense! This is the kind of sh*t you’d expect to be a Chinese knock-off, but it’s actually a fully licensed product!

I love seeing the show’s tagline stamped across the top: “Superhero of the 21st Century.” This is totally what I’m picturing when I think “warrior robot from the future.” And the worst part? Because I collect Mega Man crap, I’m now sort of obligated to track one of these things down and buy it, and that makes me furious because… just… I mean… c’mon!

I found this in a box in my basement. Does anyone remember Megaman using a Bow and Arrow? [reddit via The Mega Man Network]