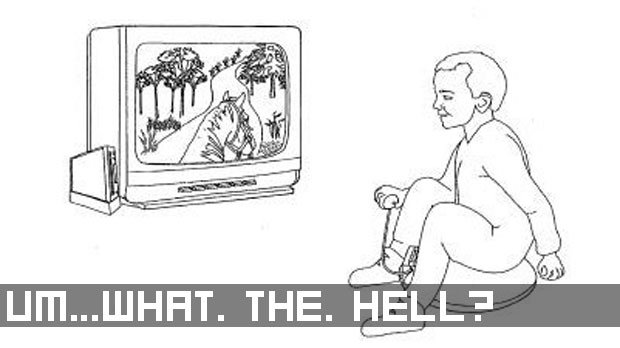 When Nintendo announced the Wii Vitality Sensor at E3 earlier this year, I was in shock. Sitting behind me in at the event, a woman exclaimed, “This is happening,” clearly not believing what she was seeing and hearing.

Now imagine the reactions if Nintendo had revealed a Horseback Riding Saddle peripheral for the Wii. Let that soak in for a second. A horseback riding peripheral. Done? Well, believe it or not, this is something Nintendo has considered seriously enough to file a patent with the European patent office.

The patent describes an inflatable seat with a pocket for the Wii Remote, which is used to sense movement using the controller’s accelerometer. It goes on to describe possible applications, including animal riding (horse, bull, camel… giant eagle… uh, dragon) and hang gliding or motorcycles. Detailed is an example of the Wii displaying the back of a horses head, with players raising their hand for “balance as in Bronco riding, a lasso, a sword, or other weapon, etc.”

That picture up there is actually an image from the patent; this isn’t a joke. More details and images of this concept at Siliconera.