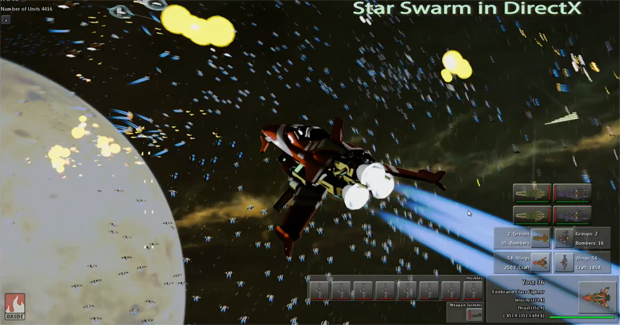 Leveraging AMD’s Mantle technology, Oxide Games has come up with a new game engine intended for real-time strategy titles on PC and consoles called Nitrous that can handle up to 5,000 AI- or physics-driven objects (like laser beams) on-screen simultaneously.

“Take the most complex scene you’ve ever seen in StarCraft II and multiply it by 10,” Oxide founder Dan Baker told Engadget. The company has demonstrated the engine’s capabilities in a simulation, Star Swarm, which looks impressive and does a good job of showing the sheer scale of it all. According to the video, three strategy games powered by Nitrous are in development.

For as long as I can remember playing real-time strategy games, I’ve had exactly one “tactic,” if you could be generous enough to call it that: create a giant army, and if it’s not powerful enough to overcome the enemy troops, well, that’s “gg.” Micromanaging has never been one of my strong suits, and I can only imagine keeping track of thousands of units unless they were cleverly grouped together or weren’t under my direct control. Exciting possibilities, though.

Next-gen strategy game engine lets you control an army of 5,000 units at one time [Engadget]