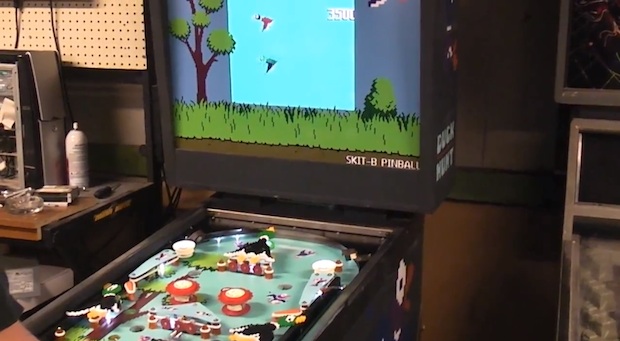 Ah, Duck Hunt. If you think about it, the lightgun NES classic is actually the very first first-person shooter. That explains so much! I’m terrible at modern day FPS games, so it makes sense that I was bad at Duck Hunt. I guess you could think of today’s aim assist as being similar to putting the lightgun directly on the TV screen. I did that.

Getting back on track, Arcade Heroes pointed us to this outstanding Duck Hunt pinball machine. Creator Skit-B Pinball calls it an electromechanical/PC hybrid. I call it beautiful. The pixel-ish ducks and the bright colors instantly won me over, but it’s the ball-to-screen tie-in that I really love. Bouncing shoots at the ducks — hit the right target and a duck goes down. Lose a ball and that damned dog laughs at you again.

It looks as if they’re just working on Duck Hunt Pinball for fun, and that it won’t be released. That’s a shame. I’d dump rolls of quarters into this machine.