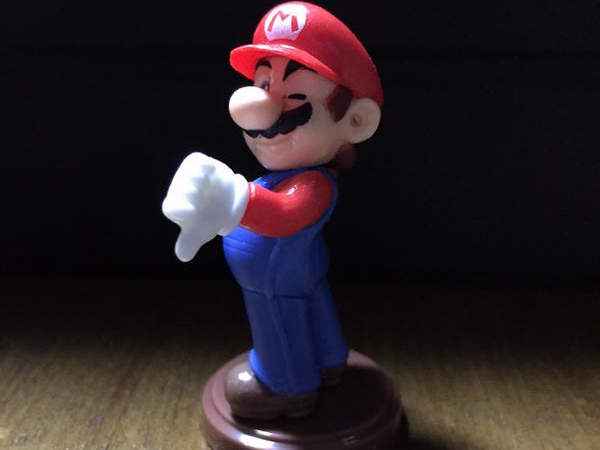 Oh, you don’t like the Wii U? FUCK OFF

Thirty years of murdering Goombas under his boots has taken a toll on Mario. Choco Eggs, little treats that contain toys, are currently harboring small figurines celebrating Super Mario’s 30th anniversary. On Twitter, @SUPERMARIO_128 found a Mario that’s done with the crushing expectations that 2016 has placed on Nintendo’s most popular franchise:

One small flip of the wrist is enough to make a slight smirk and a winked eye something sinister. No longer is Mario congratulating or even encouraging players. He’s mocking you. He’s watching you press those buttons, watching you post about your disillusionment with Nintendo on NeoGAF, watching you sleep, waiting.

If you import one of these figures, and you get another one of these defective units, be very careful with where you place him at night. You’re safest if he’s still chambered in the egg, but then how do you know if he’s defective or not? You can never be too careful: throw it into the ocean, and row back to shore quickly, but not so quickly as to arouse suspicion. Only then can you hope for safety.