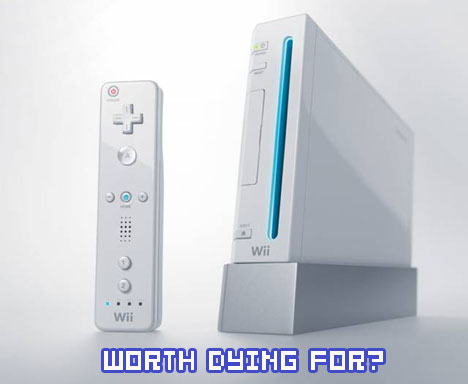 In an example of teenagers taking just about everything on earth much more seriously than necessary, thirteen-year-old Jake Roberts made a fatal choice to take his own life after an argument with his father and sister. The reason? Jake wanted to play his brand new Wii, acquired with his birthday money (his birthday had been a few days prior). He then retreated to his room, where he was found hanged by his own school uniform tie a few hours later.

His father commented on the incident:

The first thing I saw when I walked in to Jake’s bedroom was all the paper he had ripped up on the floor during his tantrum.

The door was open with his bed to my left behind the door. I was going to tell him off when I turned. It took me a few seconds to register what I was seeing.

His school tie was round his neck and he was hung from his cabin bed. I tried to lift him and his tie was attached to a bar on the bed.

If someone casually told me that a kid killed himself because he couldn’t play the Wii, I might laugh, because it sounds like a joke. Reading the real details, however, I find my laughs have pretty much dried up. I don’t think it has a thing to do with the Wii itself, but I have no doubt tragedies like this will only provide more ammo for anti-games activists.

[Via Daily Mail — Thanks, Jonathan]