The Thimbleweed Park Kickstarter is almost over! We’re celebrating this historic event with an explosive interview series starring not one, but two amazing middle aged men — Mr. Ron Gilbert (Monkey Island) and Mr. Gary Winnick (Maniac Mansion). In part one we discover the truth about why Ron and Gary reunited for the project, what makes Maniac Mansion’s look worth revisiting, the Kickstarter advantage, and more.

Ron talks about his brain in 3rd person a couple of times. It’s fun to imagine his brain detaching from his body and hanging out with Purple Tentacle in the basement.

Thanks again, Ron and Gary! Make sure to come back tomorrow when we discover why Ron names so many of his games after places and what Gary likes to “fool around” with. (Hint: It’s different art styles). 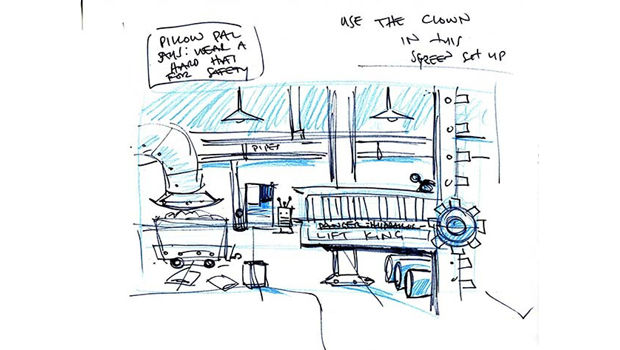 Dtoid: What brought the two of you back together again for Thimbleweed Park?

Gary: Ron and I have stayed in touch over the years and have often talked about doing another point & click adventure together, but usually our schedules haven’t lined up. About six months ago our schedules lined up, and Ron had the idea for us to try Kickstarting a classic adventure game.

Ron: When I said “Let’s do a Kickstarter for this,” I was actually joking, but 5 seconds later my brain said, “Yeah, that’s a good idea.”

Dtoid: Maniac Mansion‘s visuals were shaped in part by the technical limitations of the time. Thimbleweed Park isn’t constrained by those limitations, yet it shares a similar look. What it is about the visual style you created with Maniac Mansion that inspired you to return to it?

Ron: I’ve always resisted the idea of doing another point & click adventure game. I knew if I did one, there would have to be something special about it. When Gary and I started talking about how much fun it was to work on Maniac Mansion together, and how we should make another adventure game that really was like that, my brain started to really get excited. The authentic Maniac Mansion art style was the missing “special” part.

Gary: We think there’s a real charm and innocence to the retro art—not only is it nostalgic and a throwback to the first games we did, but there’s also something about playing a game with what amounts to colorful animated icons. Players immediately understand the representation of the characters and environment and tend to use their own imaginations to fill in and create a richly detailed world. 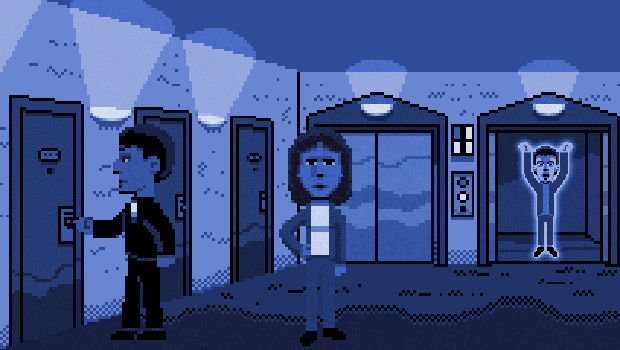 Dtoid: Was Kickstarter always the plan for Thimbleweed Park? Did you ever consider going the traditional publisher route?

Gary: I don’t think a traditional publisher would be that interested in a project like Thimbleweed Park. Aside from the funding side of things, Kickstarter is also an opportunity to connect with and directly build a community.

Ron: That is one exciting thing about crowdfunding: connecting with players. During Maniac Mansion there was no connection. We worked on the game, released it and then waited three months for magazines to come out with a review. Maybe we’d get some letters mailed in. By the time Monkey Island was released, there was CompuServe, but the community was still very small. Now we have over 13,000 people to talk to and the game hasn’t even started production.