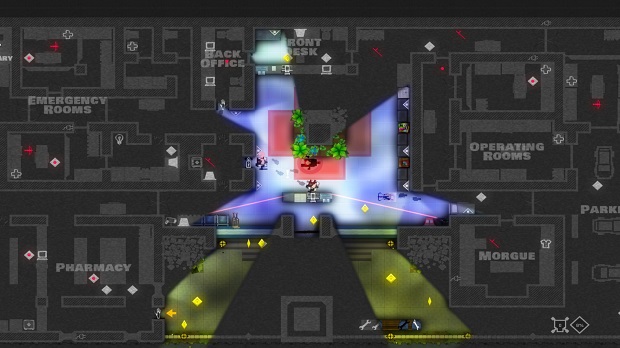 Monaco: What’s Yours Is Mine was finally released on PC and Xbox Live Arcade in the past few weeks and creator Andy Schatz held a Reddit Ask Me Anything session where he answered questions about the game’s long development. Schatz revealed that a pair of competitive multiplayer modes dubbed “Thief vs. Thief” and “Cops vs. Robbers” were cut after he was unable to make the modes balanced and fun at the same time.

“…we discovered that for both modes the balance didn’t really work within the existing levels,” Andy explained. “We were going to have to build entirely new content tailored to them in order to make them feel at the same level of quality.” Whilst the idea of a competitive multiplayer aspect sounds really intriguing, I have to imagine balancing each side would have been a nightmare, considering the skills all the characters have.

Schatz also revealed that Monaco has made $1.2 million in revenue split between direct sales and Steam. In the end Andy’s able to pay off the loan from the Indie Fund, pay other contributors to the game, and still have enough money left over to make another game. Well done, sir!

Filed under... #Arcade#Monaco: What's Yours is Mine