If I try to not get hyped, the game would steal my resolve

I liked Dishonored a lot, even if it didn’t turn out to be a literal ninja game. What I seem to have liked most about it, though, is its more tertiary elements. I love the fiction behind the world and its stylish, stylized aesthetic. On the mechanical side, however, I ended up being surprised that it didn’t feel like there was much more to it than playing, well, Thief, save for the empowering Blink ability and comforting knowledge that I could, if need be, literally kill everyone. Thankfully I’m not that bad at stealth.

Dues Ex: Human Revolution — also from Eidos Montreal, though a different team than that which is making Thief. — I liked less, for a variety of reasons best saved for another time.

What I’ve seen of Thief, on the other hand, looks like the stealth game I wanted those to be, despite some niggling concerns over yet to be nailed down attempts to make the franchise current and whatever other fan complaints have arisen since the first trailer was shown. 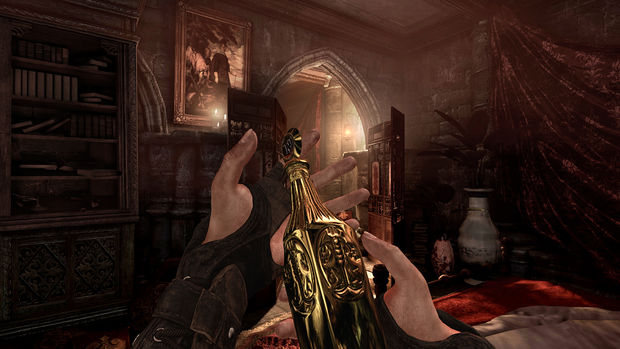 I think Daniel Windfeld Schmidt, Thief’s lead level designer, might’ve nailed down my reasoning in my interview with him. As he tried to distance his work a bit from Arkane’s Dishonored, he mentioned that Dishonored is ultimately about revenge and assassination (non-lethal or otherwise), Obvious, but it got me thinking.

There’s almost more nobility in Garrett’s misdeeds, or perhaps it’s the more mischievous nature of his cynical existence that’s so enticing versus the murderous nature of the others. He’s merely pushing himself for more and more challenging scores, after all — some I can relate to as a videogame player at the least. Maybe I’m just an undiagnosed kleptomaniac, inexplicably drawn to the idea of stealthing about and knicking things like a Robin Hood whose altruism bone has atrophied.

Enough self-diagnosing. Thief time. We were shown a demo of one of the game’s shorter stages, a fourth or a third into the story, which takes place in a lush opium den for the conspicuously, extravagantly wealthy, replete with prostitution and all sorts of expected amenities. 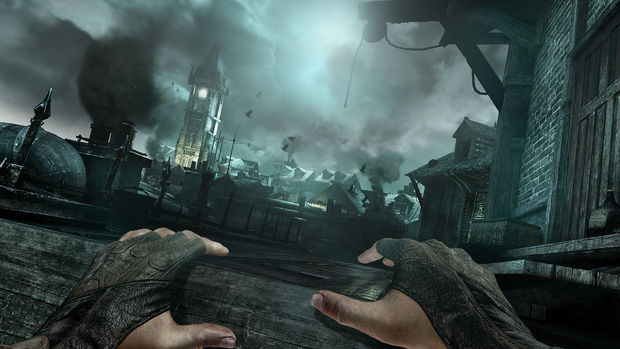 Getting in required some work (there are at least two ways of doing so), though, so we started out on the dim streets of Thief The City, which is quite the depressing place. While the new game has done away with many of the more supernatural aspects of the game, the pre-industrialized setting is sticking around, which means a lot of wood, cobblestone, and coal burning. I admit, I missed the warm electric glow of whale oil just a bit.

Once in the opium den, The House of Blossoms, I got just the splash of color I needed in the form of enough crushed red velvet to the smother the world ten times over in a soothing, sensual death. The game is apparently running on a heavily modified version of Unreal Engine 3, but it’s just so damn good looking that I find that fact unfathomable. A later tech demo showed all sorts of mad technical feats. One example is rain in which each and every drop is a particle that can react in real time to the luminosity of lightning striking overhead. Maybe the series’ supernatural elements were just funneled into the tech.

Ah, but the main event. Slinking about. 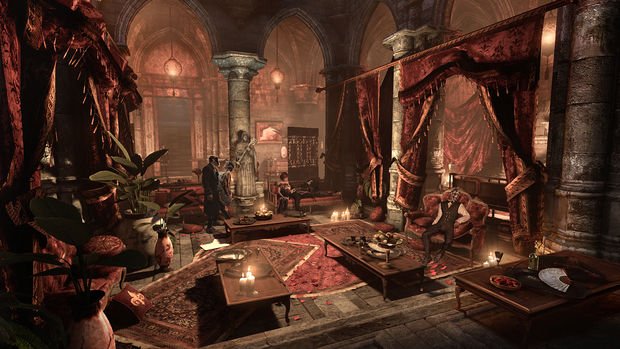 Not to worry, there’s a load of that. A cool new feature mildly obscures an ovular region around your screen, particularly when you’re moving quickly, to simulate real life peripheral vision. I dug it. There’s also a huge focus on bringing Garrett’s hands into the forefront similar to something like Mirror’s Edge His hands are his best asset, so it’s kind of cool to see the tactile engagement with the environment versus feeling like you’re swiveling a camera on a stick about. After all, we in our everyday first person view get quite a good look at our hands; it makes sense to extend it into our first person videogames.

As Garrett got handsy with his environment en route to plunder, we got to overhear all manner of salacious dialogue, from the exchanges between prostitutes and their unfaithful clients to an alarming mention regarding what happened last time someone accidentally overfilled the opium dispensary. That cool context clue I picked up did lead to one of the less savory things about the demo, though, the touches aimed to make the game more accessible.

Later in the level, after some appropriate thievery has taken place and Garrett needs to make an escape under duress, the game’s UI will just tell you that you can go into the opium control room and unleash a stifling drug haze to abet your escape. It marks it as (Optional). It doesn’t require you to do so. Still, I felt like my bothering to pick up on context clues in conversation was sort of undercut. Of course, there’s also suspicion over the new, detective mode styled “Focus” ability that is being called optional, but, as of right now, can’t be turned off. 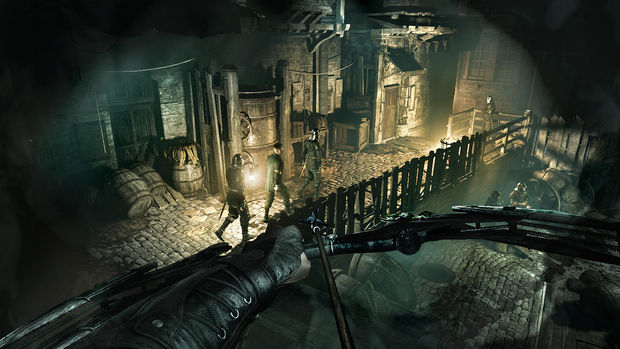 Things are still in flux here, mind. Schmidt was clear that the team is still trying to balance how much prompting to give to the player and the like and that they’ll be agonizing over how best to do it likely until its final day. As creators, I imagine you don’t want players miss tons of things, but the team clearly wants people to have totally different experiences. On the other side of the argument, it’ll be interesting to see how things pan out in terms of accessibility. There’s obviously plenty of time for things to be hammered out. Even if Focus stays, knows that it’s a finite resource that does not automatically recharge and can also be expended as a last ditch combat aid or even used to pick locks more quickly.

One sort of clue system I enjoyed is an eye-catching glint of light that reflected, albeit unnaturally, off of a woman’s jewelry. It was a subtle effect that nicely accounts for Garrett’s trained thief’s eye and accommodates that it can be hard to notice more minor details (like whether or not a pair of earrings is worth stealing) in games.

Ultimately, Garrett made a decidedly harrowing escape amidst an encroaching opium haze. It was a stark counterpoint to earlier sneakery and does sort of feel like it undermined the shadowy, methodical style that preceded it. There’s undoubtedly quite a bit to be said about Thief and I’m strangely captivated by everything it chooses to do or chooses not to do. I’ll have some more words on the game soon. This is but the tip of the iceberg. Like, did you know the game has some super neat seeming AI? ‘Cause it does. I mean, I’m sure you’ll all find a way to break it regardless, but it’s cool stuff. Stay tuned.