Let’s get this out of the way: no other new character from 2019 is as memorable and charming as that horrible goose from Untitled Goose Game. Honestly, there is no better representation of the collective mood than that goose. It’s become a symbol of irreverence and tomfoolery, finding its way into everything from Muppets’ skits to protest signs.

We all love the goose but I think its entrance into the zeitgeist has overshadowed many of the other new, original characters who made their debut in 2019. Original creations were not in short supply this year and throughout the months, we were introduced to characters who dazzled in their games. Some were the central focus of their stories, others were NPCs who elevated the source material with their personalities and charm. No matter what role they played in their game, the following new characters from 2019 are worth highlighting and giving one last moment in the spotlight. 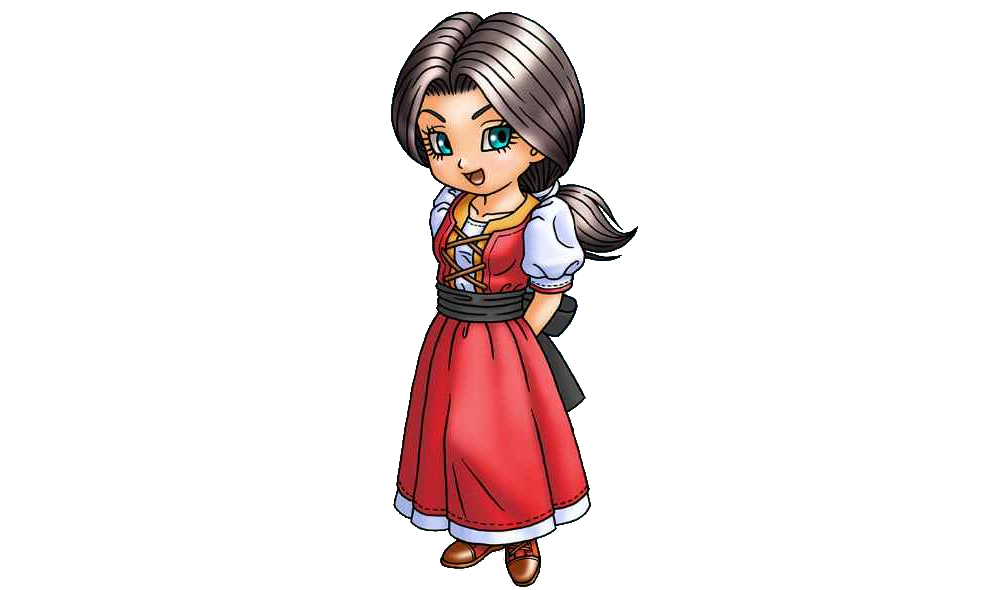 One of my favorite movie character tropes in the strong, sassy woman who owns a bar or brothel in a western. They’re always quick with a dirty joke, have their wits about them, are generous with the cleavage, genuinely care for the people who work for them, and aren’t afraid to do a little dirty work if push comes to shove. That’s why I love Babs from Dragon Quest Builders 2.

The entire storyline on Khrumbul-Dun could have been a five-hour eye-roller. A town, destroyed by the Children of Hargon, is slowly rebuilt by the Builder and Babs, the only woman in this old mining town. All of the men are infatuated with her just as they were her mother, a bunny dancer. A lot of the dialogue can be creepy, or at least would have been if Babs wasn’t such a spunky go-getter who uses their love to her advantage.

Throughout the chapter, Babs flaunts what her mama gave her to persuade the men to do her bidding. Whether that’s helping rebuild the town or fighting off monster intruders, Babs knows how to keep the men in line and get her way. If that means dressing up as a bunny and shaking her tail for the boys, so be it as long as that big, beautiful bar gets built. 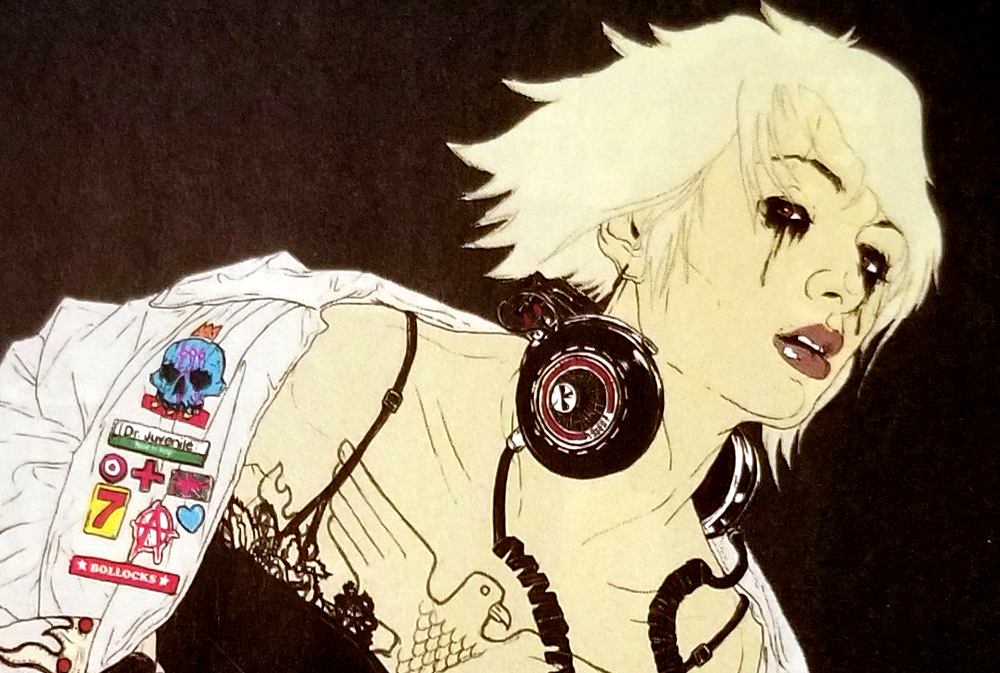 It was almost 10 years ago that I asked Suda51, creator of No More Heroes, if sexy blonde Sylvia Christel was a self-insert. Like the now-famous game developer, she curates and dictates the bulk of the player’s experiences in the first two No More Heroes games. She’s also stylish and sassy, two adjectives that describe Suda to a ‘T.’

He laughed at the idea but declined any intention to make Sylvia his avatar, stating that any resemblance between the two is purely coincidental. Fast-forward to 2019 and you have Travis Strikes Again, the latest game in the series, and Dr. Juveline, the sexy blonde game developer who (you guessed it) curates and dictates the bulk of the player’s experiences. This time, there’s no question as to who’s a stand-in for who. Dr. Juvenile is Suda, at least part of the time. She even created an in-game version of Shadows of the Damned alongside a man named Damon Riccitiello, just as Suda created the game in real life alongside John Riccitiello, former CEO of EA and current head honcho of Unity.

Dr. Juvenile’s co-starring role in Travis Strikes Again takes a simple, surrealist romp to and elevates it to the level of honest-to-God videogame autobiography. Lets hope she comes back for the three-quel. 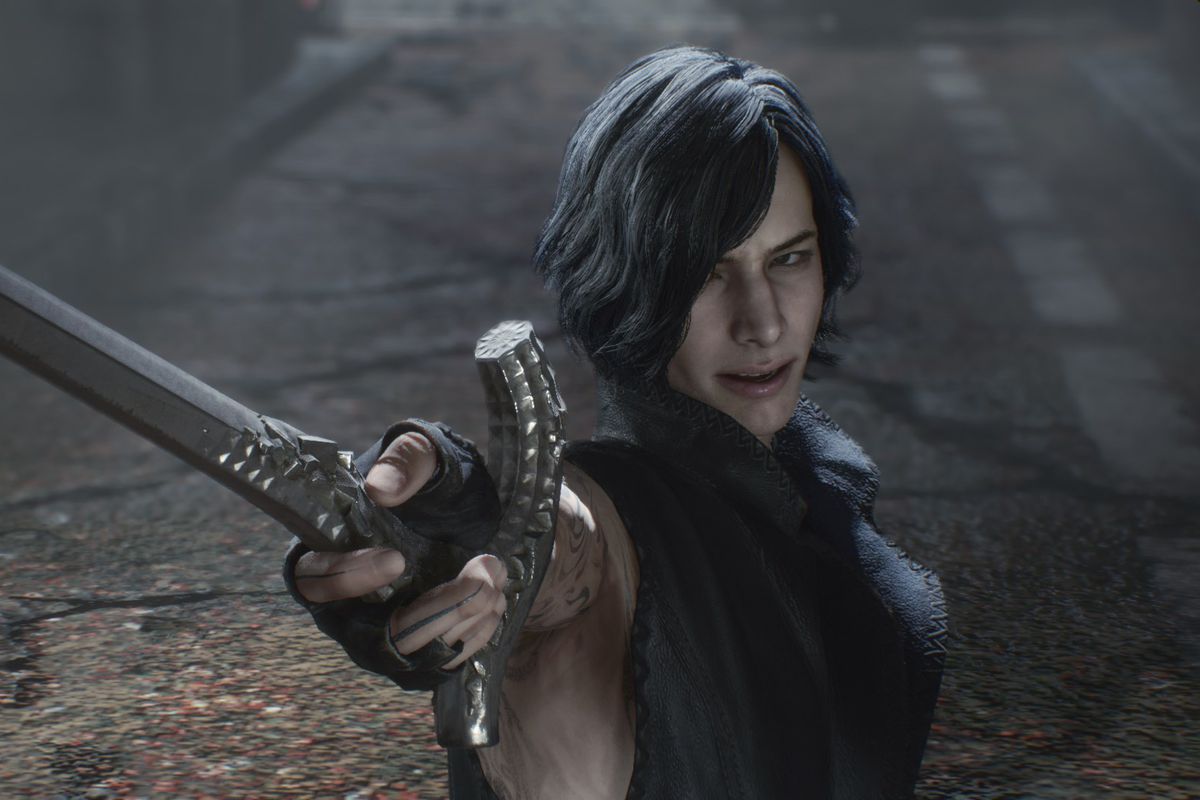 I’d love to talk about any of the three playable characters from Devil May Cry V. How Nero has grown as a professional and gained a more wry sense of humor and closure to his family lineage. Or how Dante concludes his familial arc. But no, for brand new characters, it has to be V. V is easily the most unexpectedly likable thing about DMCV, coming from a context where his initial reveal was met with a lot of mixed feelings. A scrawny looking emo kid juxtaposed to Dante and Nero’s coolness, who also micromanages monsters to fight for him? That doesn’t sound like Devil May Cry.

But V is cool. He’s just emo cool, compared to Nero’s punk cool and Dante’s surfer cool, as I’ve seen some people compared the three. Every Devil May Cry character has an audacious flair to them that makes them likable and even stick boy V has that. You power his Devil Trigger gauge by reading poetry mid-combat. The whole time he spouts poems from William Blake, you easily control a shadow panther and dark chicken to lay a demonic smackdown on your enemies. Taunting with the other two characters is a funny and flashy way to show off, but V feels like he was built to taunt while having his minions do all the work. At S rank, his taunt is either to conduct a symphony or play an air violin on his cane, and I’d always let them play out after the fight is long done.

Even V’s song is evident of how V has grown on me. At first you think it’s all about Devil Trigger, that you can’t get into the really heavy sounding emo rock that is Crimson Cloud. But then you start fighting demons as V with his theme playing and it starts to grow on you. The way the song is paced so that it’s audible between Shadow and Griffon’s attacks is great, and it’s not hard to hit S rank with V so sooner or later you’ll start to sing along with the lead vocalist as she really belts it out. 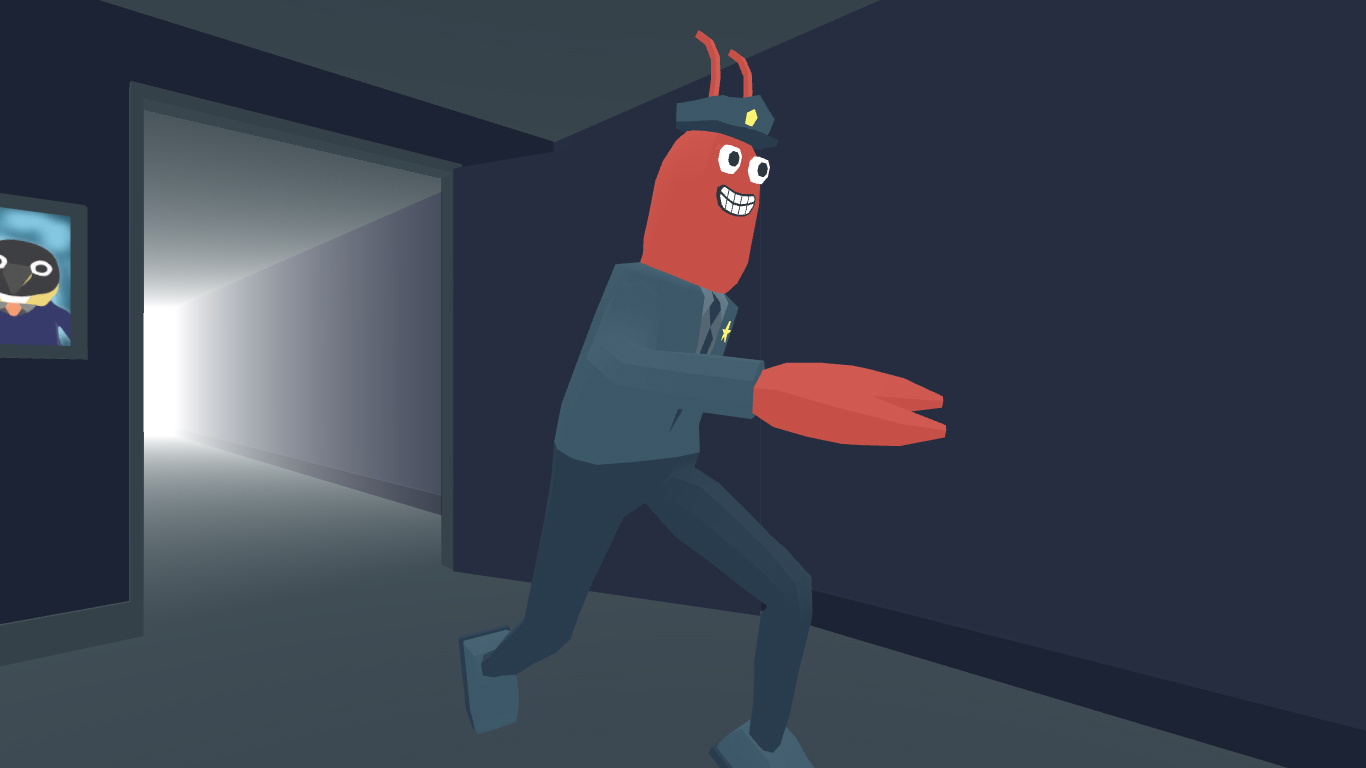 Kevin Mersereau: Lobster Cop from Frog Detective 2: The Case of the Invisible Wizard

His name has been but a whisper until just recently, spoken in hushed voices with tones of reverence and longing. Every character I’ve met in this world looks up to and adores him unconditionally. After all of the buildup from the first game, in Frog Detective 2 we finally get to see the man in the flesh, and he’s everything I wanted him to be. He’s kind of a jerk, but he’s also completely oblivious to it, and he genuinely seems to be trying his best to be a good person.

More importantly, he’s a giant lobster in a cop uniform, and just the sight of him makes me giggle uncontrollably. I love Lobster Cop. I love him so goddamn much it hurts, and I can’t wait to get to know him more in the next entry of the Frog Detective series. 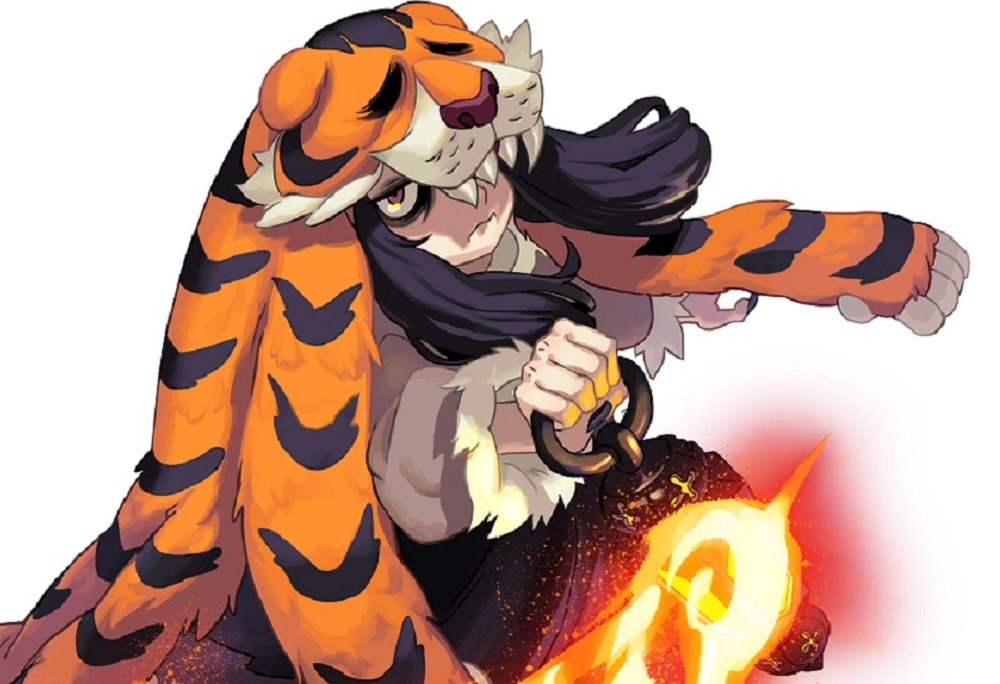 Honestly, you could probably insert the entire cast of Indivisible as my entry. If there’s one area in which Lab Zero’s RPG truly excelled, it’s in the introduction of an immediately loveable cast of heroes. Whether studious botanist Ginseng and Honey, masked superhero Naga Rider, sultry water goddess Thorani or thigh-slapping pirate Baozhai, Indivisible almost had too many delightful characters, not least of all its memorable, strong-willed protagonist Ajna.

But when it comes to choosing just one of these colorful adventurers, I can’t help but raise a lantern for gloomy sorceress Razmi. Joining Ajna’s brain-party early in the story, Razmi is a reclusive woman who tags along with the rebels after her home is destroyed by the Royal Guard. Clutching her mystical lantern – which contains powerful tiger spirit, Bom – Razmi becomes the group’s petty antagonist, keeping the party’s ego grounded with an ever-present (and very funny) outlook of doom and gloom, delivered in excellent sardonic tone by actor Stephanie Sheh.

Regardless of any impending threat, Razmi’s emotions never raise above that of apathy or twisted self-amusement, facing death time and again with a pithy sigh and a bleak one-liner, while often bemoaning the fact that she can’t just make everyone “crispy”. But despite the shaman’s destructive attitude – constantly punctuating her allies’ dialogue with hilarious barbs – a spirit of genuine friendship, loyalty, and heart becomes apparent as the tale progresses. While Razmi never drops her veil of indifference or admits to feeling anything for her allies, her tight bond of companionship to Ajna is readily apparent, with the shaman’s awkward inability to admit she cares only solidifying her obvious love for the young hero. Besides that, she’s just really, really funny.

You can throw a dart at Indivisible and you’re likely to hit a character that shines, whether in concept, personality, visual design, animation, or voice acting. But Razmi is one of the few party members that is the total package – a standout among standouts. While Indivisible itself may not have been a total success, its fantastic characters are almost above reproach. Here’s hoping that this is not the last we’ll be seeing of them. 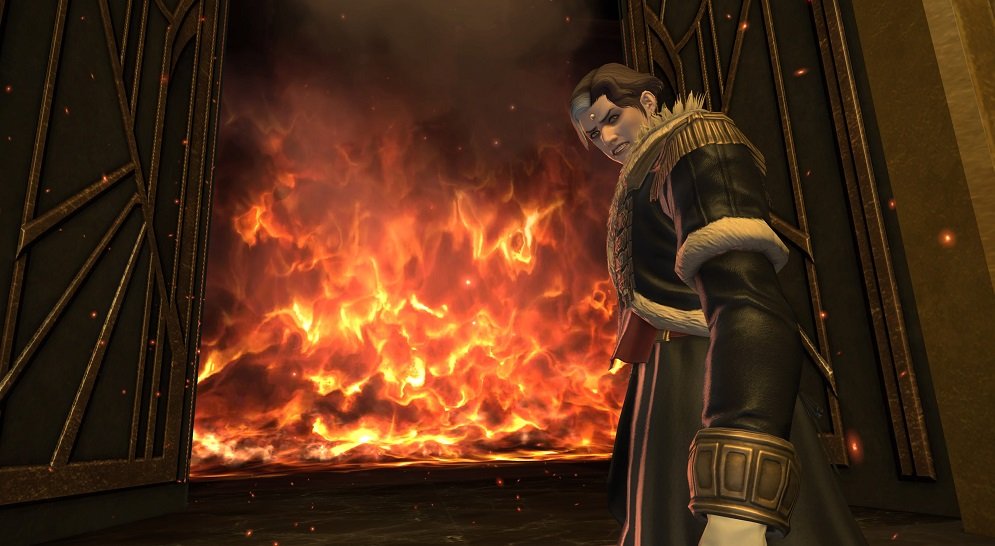 What are great heroes without great villians? Final Fantasy has many greats and every other year Final Fantasy XIV strives to add another to the list. Emet-Selch may be the best antagonist in the entire franchise since Kefka and Sephiroth.

He’s very much cut from a similar cloth as FFVI’s Kefka and FFXV’s Ardyn, but he’s neither constantly getting into scraps with you or leading you on. Instead, he’s actually part of your party after a point.

Emet-Selch has been orchestrating the downfall of your world for eons and destroying the parallel world of Norvrandt will lead to that. Yet your efforts to stop this confound him and he follows you around hoping to learn why, which is equal parts irritating and charming. As an immortal Ascian, he can just outlive you and try again, but he seems tired of it all, what with raising multiple empires and oppressing dragons and such. Still, he’s committed to resurrecting his dark god even if you ruin everything and it takes another ten thousand years to make it happen

And he just has this snarky, condescending swagger about him, like if Captain Jack Sparrow were a cosmic asshole. Kefka would be proud of the guy, but then Kefka would also try to kill him. Ardyn would simply admire them both because he deserved it this good and his motivations just got to be a very late DLC add-on instead.

Those are our picks. Let us know in the comments which characters from 2019 you thought were the best.