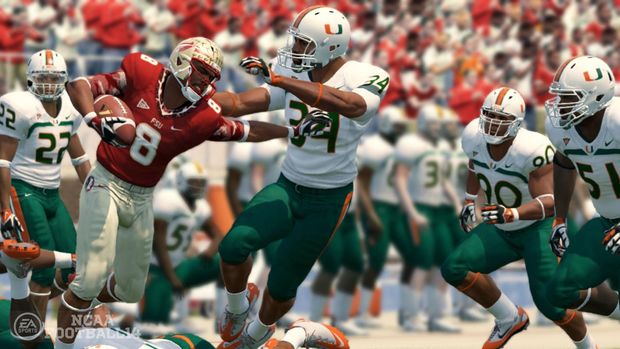 Future plans for the franchise are under evaluation

After stating that it would move forward to create college football games without the NCAA names and marks, Electronic Arts has confirmed today that there won’t be a new game in 2014.

“We have been stuck in the middle of a dispute between the NCAA and student-athletes who seek compensation for playing college football,” wrote EA Sports general manager of American football Cam Weber. “Just like companies that broadcast college games and those that provide equipment and apparel, we follow rules that are set by the NCAA — but those rules are being challenged by some student-athletes.

“For our part, we are working to settle the lawsuits with the student-athletes. Meanwhile, the NCAA and a number of conferences have withdrawn their support of our game. The ongoing legal issues combined with increased questions surrounding schools and conferences have left us in a difficult position — one that challenges our ability to deliver an authentic sports experience, which is the very foundation of EA Sports games.”

Weber assures ongoing support of NCAA Football 14 won’t be impacted by this decision and that the team responsible for the franchise will be retained at EA Sports where possible.