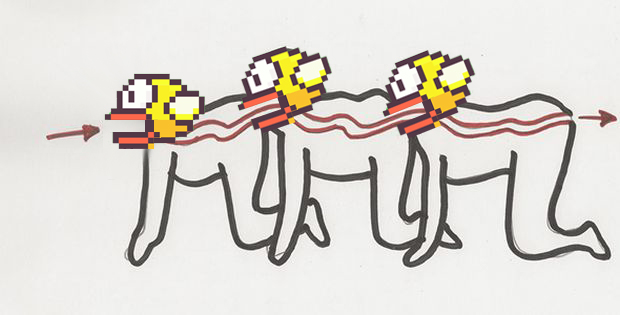 Oh, and more importantly, Flappy Bird is itself a clone

Flappy Bird is still the top free downloaded game on Apple’s App Store as of this writing. It’s pretty horrible in a lot of ways, but this whole thing is also highlighting another plight that mobile gaming sees: Game cloning.

Tumblr I Want a Clone is highlighting all of the clones that have come about trying to capitalize on the Flapp Bird craze. Flappy Penguin,  Floppy Bird, Flappy Angry Bird, Flappy Bird – Fly Bunny, Flappy Bird Platinum — and so it goes. Not only that, but look at all the requests from people offering to pay for clone creations.

And now for the worst part: Flappy Bird is itself a clone. Piou Piou vs. cactus was originally released in 2011 for iOS and Android and shares quite the resemblance here. Piou Piou vs. cactus may even just be a clone of another just like it for all we know. This all just highlights how the mobile gaming industry can come across as a big Human Centipede experiment with everyone trampling each other to make some easy money.