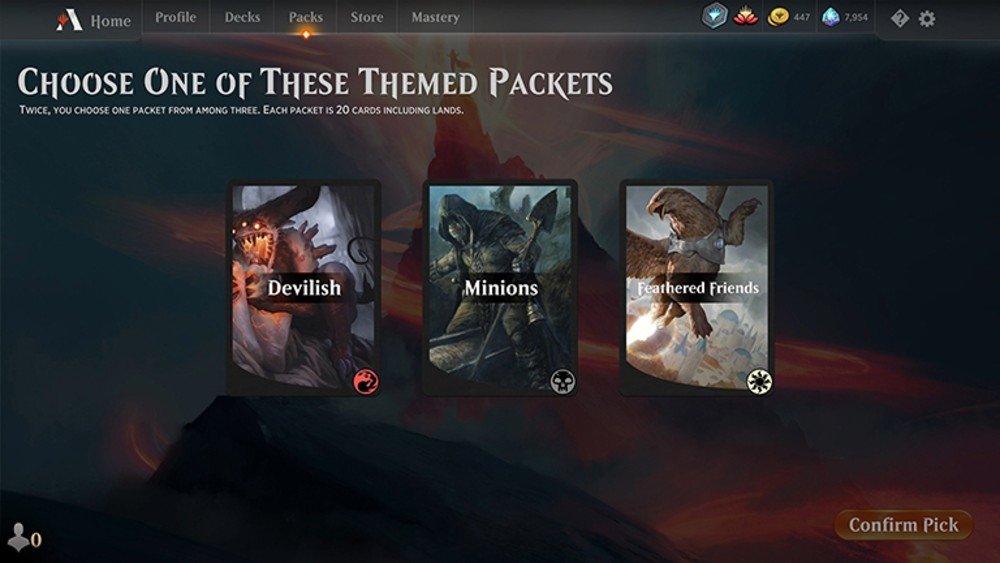 While the status of the mobile port is still very much a mystery, the Magic: Arena team reminded us this week that it’s still being worked on, and will likely arrive before the end of 2020.

In the meantime, there’s a lot planned for Arena that’s definitely on the books. The Jumpstart gametype is live today, which is basically a beginner form of limited play that allows players to choose deck “themes” (like minions, devils, flying birds and so on) and mash them together. Once you pick a deck you’ll play some games with it, then break it down (where it’ll be in your collection to play with friends): rinse and repeat. That’ll cost 2,000 gold or 400 gems per play and will run until August 16.

The “Arena Open” tournament is also kicking off on August 1 with Historic play at the forefront, as well as a focus on Historic for Friday Night Magic at home: the semi-new initiative that allows players to earn access to goodies by interfacing with their local gaming store. Player Draft is also coming to Dominaria (one of the most beloved sets of the last few years), as well as a Core 2021 “Festival of Time” event on July 25 that features the infamous Teferi Planeswalker.

Amonkhet Remastered (which actually includes Hour of Devastation cards too) is also tentatively scheduled for August 13, which will shake up the Historic meta quite a bit with some really powerful cards. As for the far future, the aforementioned mobile port is in the works, as is the next rotation, the Zendikar Rising set, Historic Anthology 4 (check out the anthology concept here), friend deck sharing (finally) and a complete rework of the “play” interface.

If Wizards keeps on ironing out those kinks with quality of life updates, bumps up the value of Mastery Passes and continues to open up modes like Brawl, the game will be in good shape for a long time.