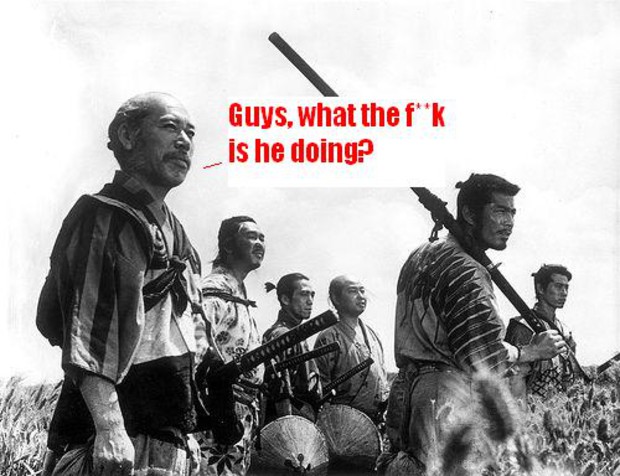 During my 48 hour binge of Way of the Samurai 3, I ended up with only a few “roll credits” endings, against several “You suck at games/don’t we have a cool death screen?” endings. My best involved self sacrifice and followed a specific stream of decisions and compromise through the branching storyline. A little sad, a little unfortunate, and the result of playing as a hero and a lifesaver within the context of the fictional world. I was told throughout that I was unique for a samurai, but I was also a good person for making the decisions that I had. Though there are several ways to reach a reasoned and rewarding ending, its clear to me that I played by the rules and gained exaltation among at least some of the people of Amana.

Then there was my last playthrough.

While I had started with every intention to be an obedient soldier of the ruling faction, something in me snapped. I didn’t want this run around life. Delivering secret messages and quelling reasonable uprising of the disgruntled villagers. No sir. Not this time. The Ouka Clan had sent their portly leader to receive a secret message. Are you really risking the life of your leader to accept a clandestine letter from a shadowy sub figure of the ruling govern. With no guards?

Be honest, you want to bash his stupid face in too!

The worst of it was, this was no brazen villainy. I had worked for these guys in another life: The Ouka Clan is destined to fall under the weight of their own hedonism. Fueled by drink and excess, this was pure witlessness. If you, the head of a rebellious and dying clan, think that you’re untouchable enough to walk the streets, unassuming of danger or betrayal, you deserve whatever brave attack falls upon you. I killed him, stole his massive sword and assumed the rule of his charges. A pawn of the Fujimori Clan had just become the king of his opposition.

Gaining a tribute for my crapulence (through the clan mission vendor) was nice, but I was king of the losing team. Further still, I still had free allowance to roam about the Fujimori grounds. And that smug Shuzen Fujimori does nothing. “Come at me, vile dogs!”, I thought, but they never recognized my station. Something about the absurdity of the situation hoisted my disbelief onto the saddle of a blazing demon horse, from which it would raze the landscape of Amana and spill the blood of innocents and defilers alike. I snapped, and slaughter ensued.

Not pictured: The person actually talking to you. How rude!

Its been said before, in terms of game design, that the player herself is an agent of chaos. No matter how finely crafted a world is, its limited by the extent to which the player is willing to work within your rules. Considering narrative, one can have as many HUD-less first person visages and heartfelt line readings from the finest actors in the most gorgeous of scenes, but, given the freedom, a user can just as easily walk off to a nearby NPC and try to shoot it in the face. To account for villainy, or at its extremist insanity, would be impossible without wresting control away from the player and forcing them to watch your story. For better or worse, of course. And so, we find game design working feverishly to wrangle this chaos. At bare minimum, good design keeps you from breaking the game entirely. At best, the game is able to respond to the chaos when it arises.

Way of the Samurai 3 seemed to ignore my bloodlust. I killed the Fujimori. I killed the Ouka. I killed the village leaders and frightened its children. I even killed the Save Game minstrels. I spared only the children and that old man with the hoe.

Not a blade to be trifled with

With all the major players dead, and with ruler Shuzen Fujimori locked away in his tower (I killed his doorman), I searched for a way to force an endgame. What does WotS3 do now, when all is chaos and you have no more actors for the final act? All you have are unkillable children, and that’s where we find our ending. A single child in the main village has a few final cutscenes with you, calling you out on being a man without reason. Threaten that child as you may, the game has already calculated your final score.

The ending? You’re described as a pointless man, and made to look foolish. The epilogue background panel suggests a strange man that, in his insane stupor, tiptoes quietly among daylight butterflies, leaving Amana in disarray without rhyme or reason. “What was the point of that?”, the game asks in the context of a story ending. In more words than that, the player is chastised for trolling the game. If you’re not going to establish a reasonable agenda and play largely within the context of the setting, then what are you doing here?

Then there’s demerits for villainy, wherein your total “Samurai Points” are diminished for killing beyond a reasonable explanation within the samurai code of honor. Killing the innocent, the unarmed, the surrendered, or the unjustifiably provoked is simply not classy for even a masterless samurai, and the game makes sure that you feel a tiny sting for it. Ultimately, the Samurai Points are a method of unlocking features and many different ways to legitimately freak out the game world, without incurring a penalty for anachronistic cosmic behavior. You can be a semi-invisible cat-person-demon if you like, but you still can’t stab women for no good reason without a garnering a slap on the wrist.

What do you mean you can’t justify my thug?

Way of the Samurai 3 provides a unique, if janky, approach to a player’s ability to exist in villainy. Rather than to coddle and bend to the player’s penchant for anarchy, the game throws up its hands and allows the user to thrash around the world, like a bratty child, until the user tires of the play. While you could just as easily walk out of the world at anytime, via the road out of town, the game presents a “Cool Story, Bro.” ending for those players still seeking narrative validation from their tirade. If I can’t have calculation of infinite scenarios, I think I can settle for a condescending “I see what you did there … ” from my code based game master.

What about you Dtoid? Have you ever been patronized for your in-game chicanery? Is a virtual pat on the head a decent substitute for a response to every possible detailed situation?