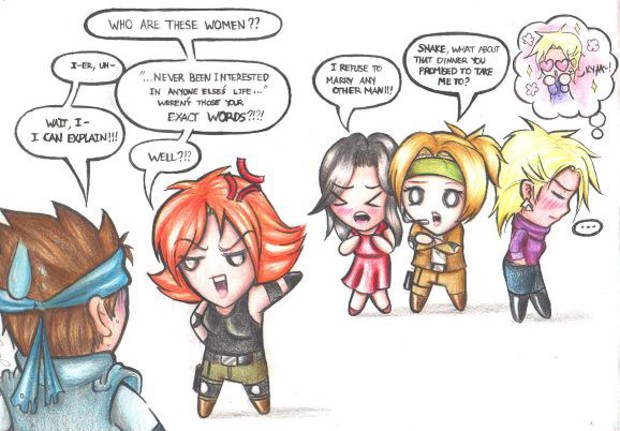 [Editor’s Note: We’re not just a (rad) news site — we also publish opinions/editorials from our community & employees like this one, though be aware it may not jive with the opinions of Destructoid as a whole, or how our moms raised us. Want to post your own article in response? Publish it now on our community blogs.  PHOTO CREDIT:  https://thesketcher.deviantart.com/]

It’s 1998. You’re a good few hours into Metal Gear Solid. After a dumb move by Snake’s squeeze Meryl you’re forced to backtrack half the game to find a sniper rifle. Upon returning to the scene you find her body replaced by a few blood spatters and the deadly-accurate laser sight of Sniper Wolf.

You’re stripped, laid spread-eagle on a cold metal table, and spoken to by your weird English twin-brother for a bit. Then the fun begins. Ocelot begins to torture you. Specifically he zaps the crap out of you, and you have to resist giving in by mashing the square button fast and hard. This goes on for some time.

But your bearded, one handed gimp torturer is fair. He gives you a choice. Resist if you can, or submit. You’ll live, but Meryl will die.

Now for those of you like me who may have worn out your digit muscles playing Daley Thompson’s Decathlon years previous, (or if you happened to be playing on the hard difficulties), this test of endurance became pretty difficult. I never was any good at the Track & Field games anyway, but this mechanic was truly anathema to my usually docile finger dexterity.

The temptation to quit was very real. But I struggled through, and by heck I saved Snake’s missus (for all good it did him; he wouldn’t see her again for ten years). It felt good to have done the right thing.
And this brings me to my point

Too often today we are given the “choice” to behave differently in games. Usually this choice is divided into one of three camps: the Chaotic Good option, the middle-of-the-road Buddhist Monk option, or Chaotic Evil — the classic D&D trichotomy.

Modern games grant us multiple opportunities to choose our character’s destiny. But how much of this choice actually affects the gameplay? Beyond how NPC’s react to you, or a slightly different end sequence, is the game just not the same?

Perhaps, like in the Jedi Knight games, you are granted access to different powers depending on whether you choose to be light or dark. Or alternatively like in Neverwinter Nights, whether or not you bully 50 more gold pieces out of Little Jimmy after returning his Mother’s severed head from those nasty gnolls, it may make no difference to your skills, your abilities, or how the game really unfolds.

The choices themselves are also too often too heavily laden with overtly good or bad consequences and connotations. You’re either a Saint or the Devil. Whatever happened to the dont’-give-a-shit merc types who do things for the money? Fable is a grand example of this. No one wants to play Miles the boring office clerk, but some alternative to being caressed eternally by light or fire would be nice.

Fallout 3 presented us with another blank, expressionless character we could mould in our own depraved image. The choices we made were again radically opposite or dead in between. If I recall correctly there was only one perk which operated if you remained neutral. Now it was pretty tough, but compared to some of the stuff being good/evil got, it was very underwhelming. It was also insane how you received “karma” for doing different acts. There was also no “neutral” means of gaining negative karma or losing good karma.

Say for instance you’d recently saved some mutant fish boy from death. You may be edging over the neutral Sweden border and narrowly entering the “we’ll jump in when we’ll know we’ll win” American territory of karma levels. Now in order to reset the balance, you’d have to do some bad shit. You can’t just stop being bad. No. You have to shoot old people in the face. Or steal. It doesn’t make sense and isn’t a rewarding method of playing the game.

Most often it’s funnier to give the crazy unrealistic super evil option. Basically it usually amounts to responding FUCK YOU in so many words to every possible query. This is by no means restricted to Fallout 3 either — other sandbox games suffer from this. But being so hilariously bad can only be so funny for so long. It’s kind of like choosing to rename Aerith (which you get the option to do for every FFVII character) Analvixen; it’s funny the first couple of times you see “Analvixen casts Healing Wind”, but it quickly loses it’s charm.

Yet another take on the moral compass-style gameplay choice is Mass Effect. While the character development and choices offered were much more complex compared to Fallout, they were only ever really presented in boring menu’s and conversation threads. Whilst it boasts much more “choice” than Metal Gear, Metal Gear Solid’s one and only turning point came about as a skill challenge, a mechanic that is welcome to me in any game.

So is choice good? Does it make us play the game more often? I recall playing Star Ocean on the PSX. It boasted 88 different endings. Considering it was a typical JRPG and took at least 30 hours to complete, did the developers really think someone would want to spend that much time to see minute detail changes in the end cut-scene? How about a game where you get nothing but choice? Replace all your shooty gameplay with an innovative facial expression mechanic? Sound crazy? You obviously never played Sentient then.

Offering a balance is the best solution, I feel. Like everything in games, I’m happy for anything as long as it doesn’t interupt the gameplay. Integrating player choices into the game world which move beyond the standard three response trope would be something I’d embrace, just as long as it wasn’t sacrificing how the game was played. And vice versa. Why give us the choice at all if it does not impact the game in any way shape or form? Metal Gear Solid stands as a shining example of this practise. I’m all for choosing between good or evil, just as long as it actually makes a difference to the game I’m playing.