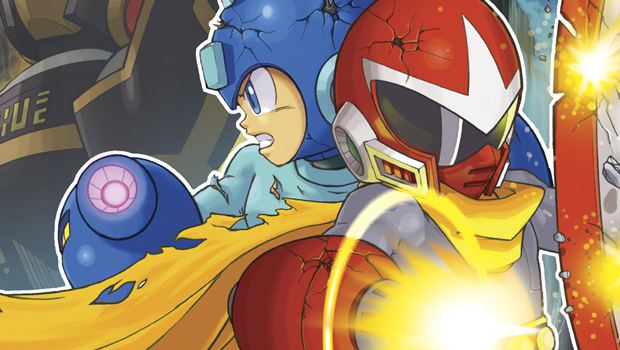 I’ve been so busy diving into Sonic and Mega Man’s “Worlds Collide” comic mini-series that I’ve neglected to talk about Mega’s post-crossover story arc. How do you raise the stakes after a dimension-bending war against both Drs. Wily and Eggman with the fate of two universes at stake? Archie found a way by adapting the Japan-exclusive Super Adventure Rockman.

Prior to “Worlds Collide,” Dr. Wily discovered an alien supercomputer called Ra Moon deep in the Amazon. He used it to rebuild the Mega Man 2 Robot Masters, construct the Mega Man 3 Masters, and repair a dying Proto Man. In MM #28, which launches in August immediately following the last issue of “Worlds Collide,” Ra Moon disables all technology on the planet, The Day the Earth Stood Still style, save for Mega Man and a few Robot Masters. Such power quickly slips out of Wily’s hands, however, because Ra Moon can’t be controlled.

The cover art I’m sharing comes from MM #31, Part Three of “Blackout: The Curse of Ra Moon.” Proto Man in his Break Man guise has put his rivalry against Mega Man on hold in order to team up and restore the planet. But first they must contend with Ra Thor, Ra Moon’s powerful guardian.

I’ve shared the standard and variant covers for #31 below. I’ve also included the covers for #28 through #30 in case you haven’t caught them before.