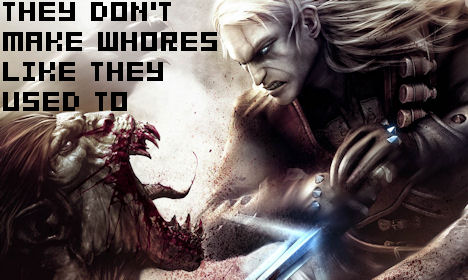 If you’re not a PC gamer, then you’ll probably have missed out on The Witcher, a Polish RPG powered by BioWare’s Aurora engine and famous mostly for having prostitutes in it. The critical reception was more or less favorable, although a couple of reviews were pretty brutal.

Good or bad, the world at large will soon be able to sample the fruit of CD Projekt’s labor when it is released on the PS3 and Xbox 360 as The Witcher: Rise of the White Wolf. Hooray for all!

I must admit I am curious about this game, but up until recently lacked a computer capable of running the thing. I do believe I shall be checking this saucy little number out when it hits the consoles, if only because I still remember the game’s awful example of a pick up line: “I know a peach when I see one.”