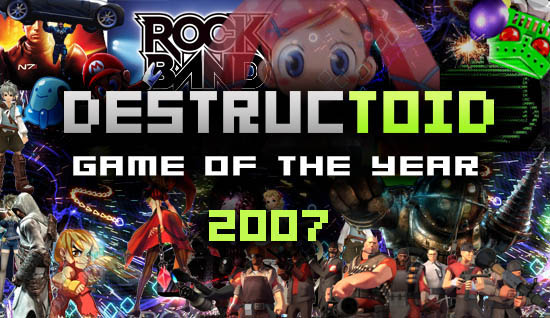 Picking the Destructoid Game of the Year was no easy task, as evidenced by the overwhelmingly varied community response to yesterday’s list of nominees. It seemed like each one of the five finalists garnered an equal amount of support: “Pick Mass Effect!” “Super Mario Galaxy is easily the best!” “COD4 FTW!” “BioShock, hands down!” “No competition. The Box!”

This high praise is well deserved, as all of the games are destined to be classics in their own right. And trust me when I say this: it was a very close race (between three in particular). But what game emerged the victor and will forever wear the green robotic crown?

First things first: To set the “awards show” mood, I just put on a tux, am standing on a stage built entirely of old Super Nintendo and Genesis cartridges, and am about to speak the following through my well-worn Snake Mountain microphone:

Without further adieu, the nominees for Destructoid Game of the Year 2007 are: 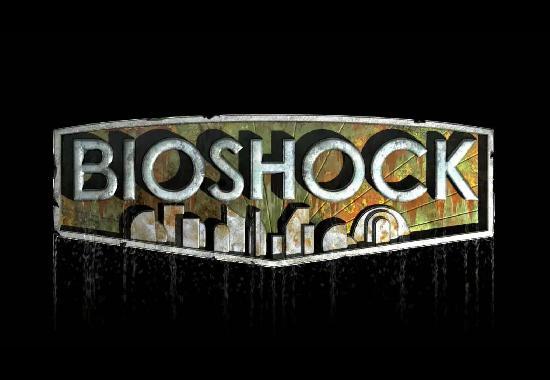 BioShock was surrounded by heavy praise and accolades the minute it unleashed its beauty on the world. No doubt you have all heard many of the same things mentioned over and over again about this genuine masterpiece: gorgeous graphics, revolutionary FPS storytelling, breathtaking atmosphere. I will try not to repeat the same things. While they are all true, there is so much more to this game than just simple aesthetics. 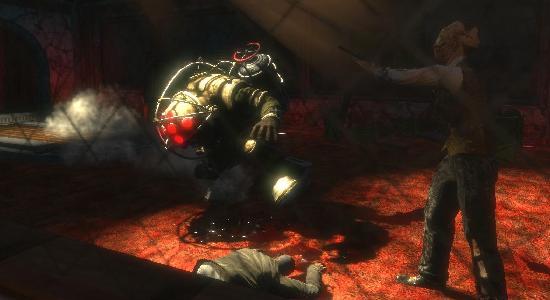 Almost all of the editors had BioShock at the very top of their respective lists of favorite games of the year. Beyond just the superb quality of the package, we all felt there was an experience that transcended basic gameplay. To play BioShock was to experience something that few gamers had ever experienced before. It was this immersive originality that elevated the game above all others.

Between genuine moral decisions, the game never held your hand with pointless exposition or useless cutscenes. For one of the few times in videogame history, you really felt like you were the main character (not just controlling him), entering the memorable world of Rapture and unlocking its numerous secrets as you went along. Instead of playing a narrative (as you do in so many other games), you actually were the narrative. From the opening plane crash to the emotional ending, BioShock never missed a beat in enveloping the player in its next to flawless world. 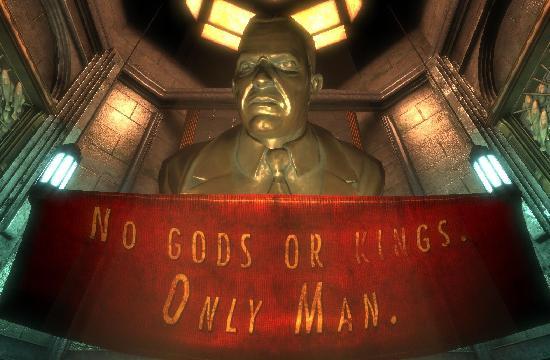 Even all these months later, we here at Destructoid still revisit BioShock just to experience its hypnotic spell again for, what feels like, the first time. It truly is a game that will stand the test of time and be talked about (and played) for years to come. A genuine one of a kind.

So, there you have it: our Game of the Year for 2007. Now, in no way does singling out BioShock signify it was miles better than any of the other exceptional offerings of the year. 2007 was a stellar year for videogames on all systems; any of a large handful of games could have taken the prize and most us us here at Destructoid wouldn’t even have batted an eye (in fact, in my special little world, Super Mario Galaxy was the winner — shhhhh).

Congrats, BioShock! Go out and celebrate!

Editors Note: On a personal note, I just wanted to say a few things to wrap this all up.

To arrive at our Game of the Year, each of the editors compiled a list of their Top Ten games of 2007. There were absolutely no stipulations. If you loved a game and wanted to put it on the list, that was all there was to it. No one was required to play anything we hadn’t already played or research things on systems we didn’t own. Basically, there were no questions asked.

From those lists, the nominees and eventual Game of the Year were decided. We aren’t a professional news site who feels some moral responsibility to play every single videogame in creation to make a fair and balanced decision. Being a blog full of extremely passionate gamers, we just wanted to have a little fun and elicit some exciting discussion about our favorite games of the year. Hopefully we did that.