The Wild Eight sounds great on paper: an eight-player co-op survival game with narrative-based progression, set against a bleak yet entirely natural landscape. Even in a fairly oversaturated market, it has the potential to set itself apart from the pack.

But much like its shabby group of survivors, it has a long way to go before it makes its way out of the development woods and into the loving arms of the public. I’m not one for Early Access gaming, admittedly, but The Wild Eight is one game I’ll make an exception for because it’s a great idea currently in need of a fresh set of eyes. 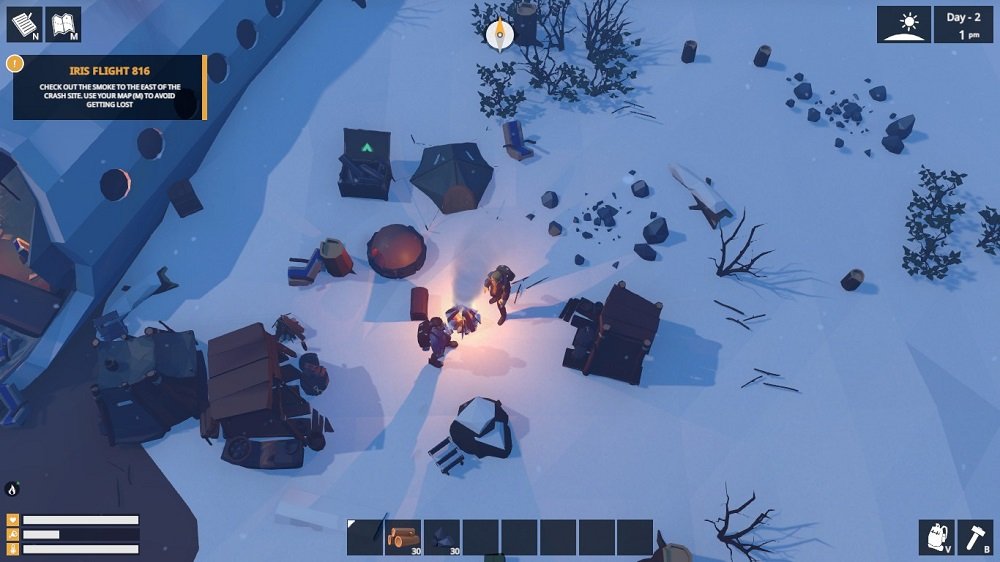 After their commercial flight crashes in the Alaskan wilderness, eight very different survivors band together in an effort to make it back to civilisation. Using skills from their everyday lives, they’ll have to hunt for food, build tools and weapons, and upgrade shelters. But it’s not just the blizzards and predators they’ll have to worry about, as they stumble upon secret government experiments and creatures not meant for this world.

The Wild Eight might be more grounded than the usual survivalist fare, but it does pay a lot of lip service to Lost, with its main mystery being who or what brought down the group’s flight in the first place. The Wild Eight gets surprisingly weird at times, what with its unexpected encounters and odd detours into restricted outposts, but thankfully, it’s not something that overpowers the main story of disparate people trying to overcome the odds. 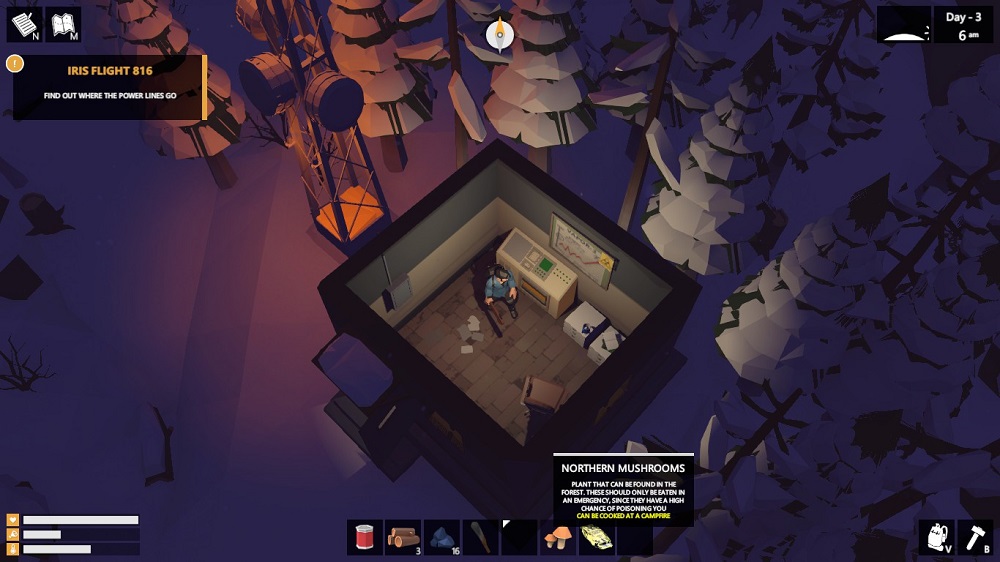 While it doesn’t have the more obvious, marketable charm of The Flame in the Flood or Don’t Starve, The Wild Eight is striking in its own minimalistic way. It’s intentionally stark, from its low polygon models to the endless white snow that covers the landscape, broken up by the more colourful man-made structures that guide the way.

I’ve always been a supporter of Unity, especially when it’s used the right way, and The Wild Eight manages to carve out its own identity when using the engine; especially with the twilight lighting and shadows that flicker and shake next to your lowly campfire. It might not look like much, but everything is crisp and clean, which makes “The Wild Eight” survivors pop even more with their individualistic designs.

Each survivor has their own strengths (one is a better fighter, another can collect more materials, while some move faster or are better protected from the cold), but essentially they’re all balanced for co-op play. Nobody is better than the other, and it becomes less so as each character upgrades their tools or levels up their universal skills. The Wild Eight has some light RPG leveling up to it, which is essential if you want to succeed. Experience is gained in different areas (hunting, crafting, mobility, etc.), so you’re encouraged to take on new challenges and keep up with every mechanic. Die, however, and you lose everything.

The Wild Eight is an unforgiving experience. If you’re going to play this in single-player, don’t. It’s a miserable, lonely slog on your own. There’s no helpful AI, and the workload that would usually be shared among the players solely rests on you; a tedious exercise considering how many resources you have to collect for the most basic setup. Most creatures are damage sponges, meant for group takedowns, even when you’re just hunting for food. If you ever decide to go solo, put the game on Easy Mode and enjoy the ride, despite the downgrade in challenge. 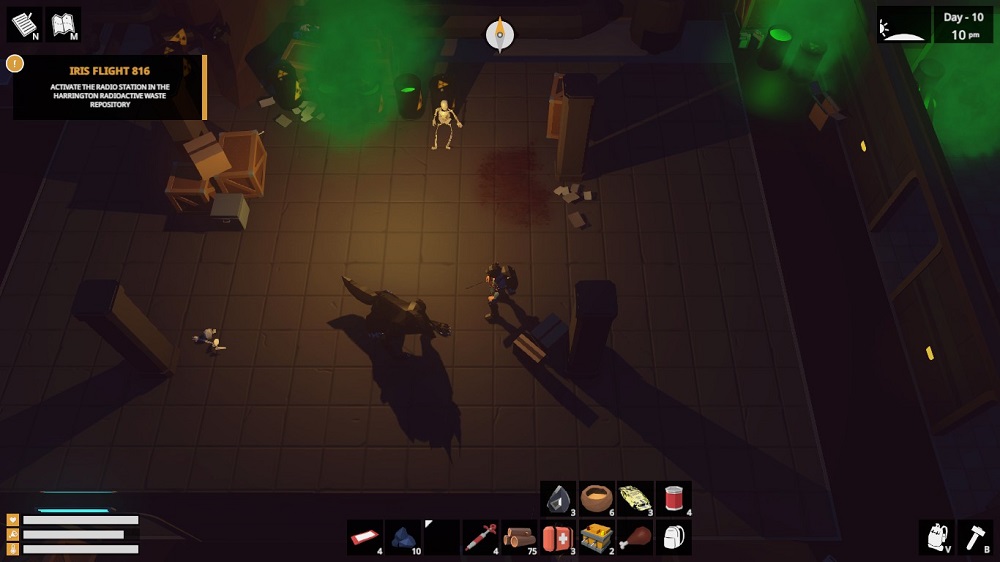 Single-player also highlights my other problems with The Wild Eight‘s promises. The sidequests aren’t all that fulfilling, really, more of a scavenger hunt. It’s a gamble going off the beaten track, and while the rewards are useful, the actual stories or objectives aren’t compelling enough. Sometimes, I found myself being suddenly killed by a mini-boss; something that could’ve been handled with someone else nearby.

Death is a major problem in The Wild Eight. Opting for the Dark Souls approach, you drop everything on death and sent back to a previous spot. But unlike the Souls series, everything about your character and their progression is reset – survival skills, building upgrades, etc. – and you’re sent back to the opening plane crash. Unfortunately, the world remains the same, so any resources you harvested earlier are still missing, making a post-death run needlessly difficult since all the advantages are gone. It’s a baffling design decision, and while checkpoints might be seen as uncouth by the hardcore and you can prepare by building chests on route, it’s extremely draining and tedious. 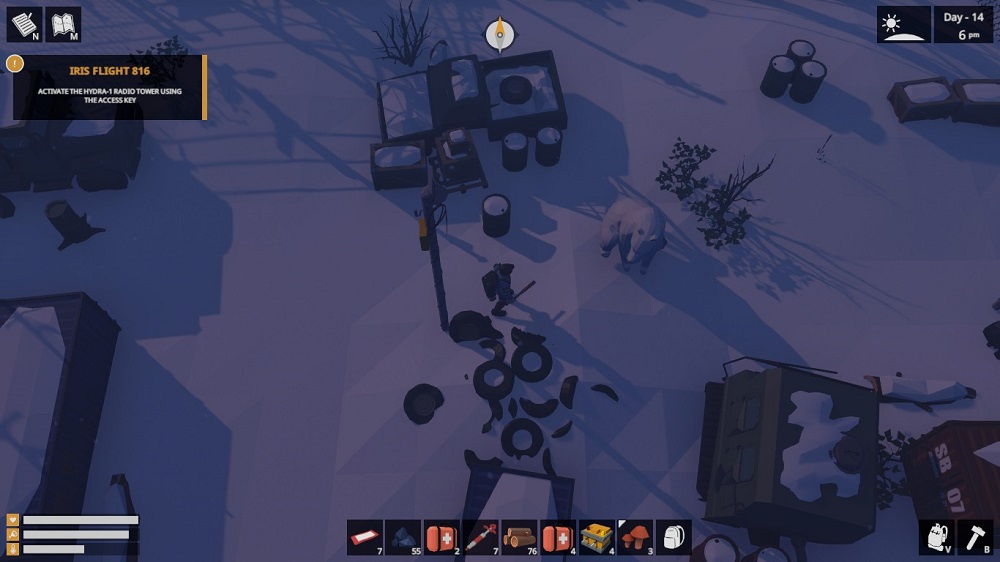 As for multiplayer, it works well enough and is constantly being revised and refined. The developers are always taking in feedback, and it’s great to see the initial errors being whittled away in record time. The first week of release saw another odd design decision where nobody could share equipment, and thankfully, that was quickly changed. As I previously mentioned, The Wild Eight is sound in concept, just not so much in vision.

As long as you have a group of friends willing to work together, it plays exactly as intended; where you fight together, hunt together, and explore together until you find your way out of Alaska. Most servers are password protected, but playing in a public server reveals how a group of randoms fall apart in a matter of minutes, making it as isolated as the single-player mode. One major flaw is that the drop in/drop out mechanic always puts you back at that dreaded plane crash, rather than near the most advanced or progressed player. 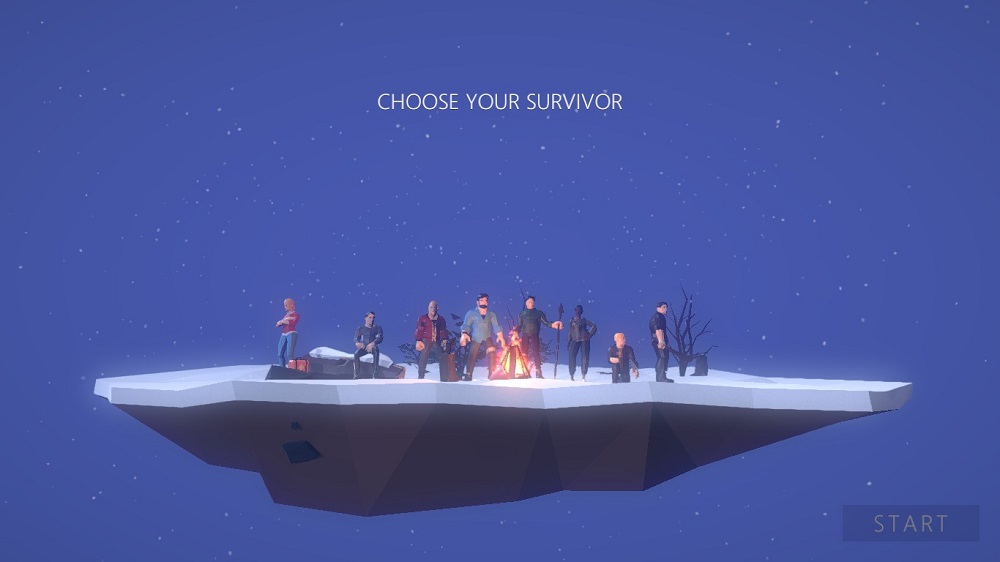 Despite my frustrations, I want The Wild Eight to succeed. It’s simple to pick up and play, easy to control, has a wonderful soundtrack, with this gorgeously sparse aesthetic to boot. Survival games are very grim experiences, full of mistrust and paranoia, and it’s getting tiresome; even to the point where games like H1Z1 have turned into Battle Royales.

The Wild Eight aims to change that, by putting players into its survivors’ shoes and helping each other through constant hardship. It’s not quite up to scratch just yet, but after seeing it being tirelessly updated from zero hour, I have some faith it’ll turn out just as that initial pitch imagined.