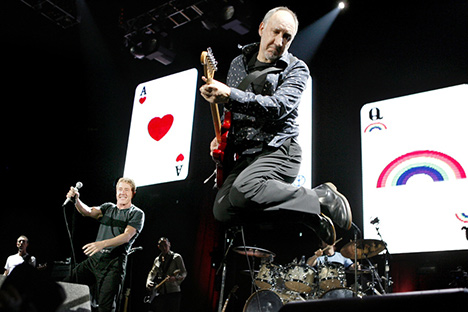 It’s been a long time coming, but at last, one of classic rock’s greatest bands, The Who, will be making its way to Rock Band. Harmonix had long ago named the band’s seminal 1971 record Who’s Next as planned full-album DLC for Rock Band, but we’ve seen neither hide nor hair of songs like “Bargain” and “Baba O’Riley” (for the last time, people, it isn’t called “Teenage Wasteland”).

Now, alongside the official announcement of Rock Band 2, we’ve got confirmation from Harmonix CEO Alex Rigopolous that a bunch of Who tracks will soon be appearing in the Rock Band Music Store — and that they’ve had some difficulty in procuring what they originally promised:

Their music really comes alive when you’re playing it … We were trying to release ‘Who’s Next’ in its entirety, but we were unable to locate all the masters. So in the face of that, Pete (Townshend) and Roger (Daltrey) helped curate this best-of soundtrack of everything we were able to find.

On Tuesday, July 15th, Harmonix will deliver a grand total of twelve songs by The Who. Since it’s a Tuesday, the songs will presumably only hit Xbox Live Marketplace that day, and will probably come to the PlayStation Store two days later — although there’s no affirmation of that in the Yahoo! News article in which this story was first broken. As for the songs themselves, only two have been revealed so far, and they’re great ones: “My Generation” and “Who Are You.”

The songs will go for $1.99 apiece, while the twelve-pack of master tracks will sell for $19.99. It may not be all of Who’s Next, but I’m sure that whatever it is, it’s going to rock. After all, the band’s only remaining founding members helped pick the tracks. Are you already opening your wallet, like I am?