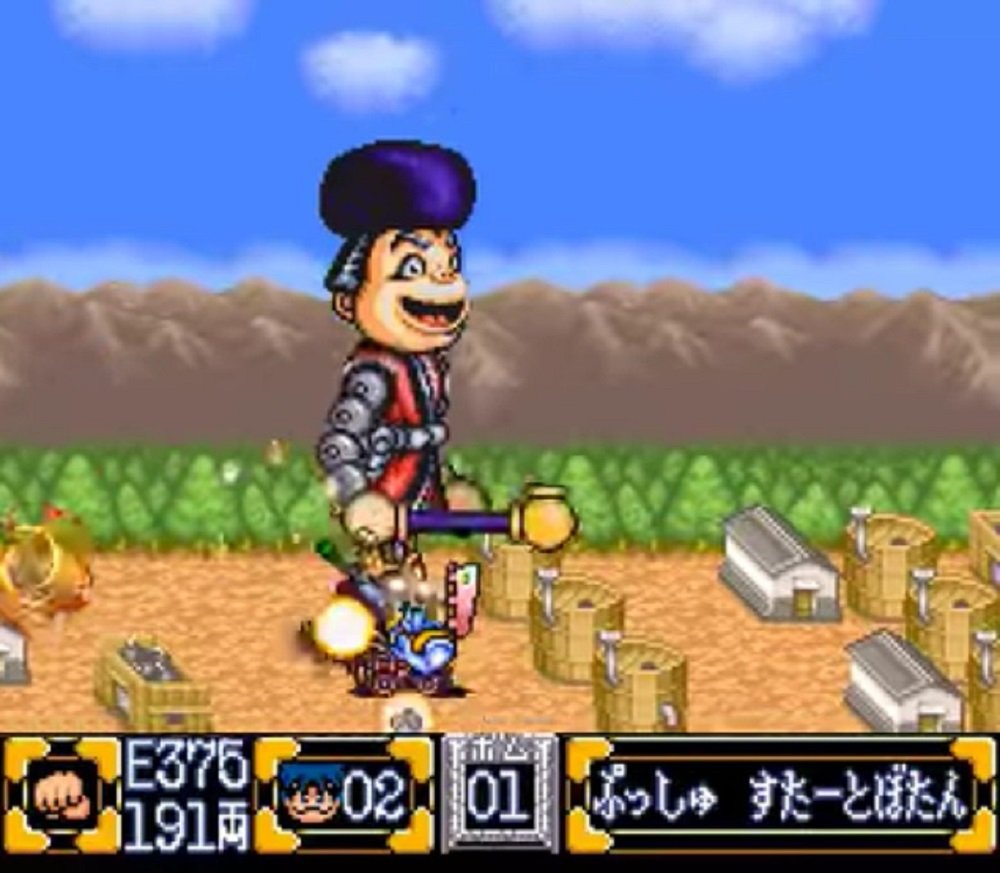 It wasn’t long after I had described Konami as collection adverse that it hit us with a trio of pretty awesome compilations. The Arcade, Castlevania, and Contra collection are all stacked with solid games. It’s actually an impressive effort for a company that, not too long ago, seemed intent on showing its fans how much vitriol it has for them.

What struck me as most impressive about the Castlevania Collection was the inclusion of the Famicom version of Kid Dracula, a game which was previously locked up in its native country of Japan as Akumajou Special! Boku Dracula-Kun. It’s perhaps not the most sterling spin-off of the Castlevania series, but the fact that Konami went to the extra effort to localize it for the collection is strongly appreciated.

The fact that it went to the effort of translating a game that was never released in the west sets my mind off to dreaming about what other collections of Japanese treasures could grace the west. Konami is, after all, sitting on a backlog of treasures that we never got to see over here. Could we finally see a translation of obese penguin simulator Yume Penguin Monogatari? What about a gathering of Parodius games?

No possibility gets me drooling as copiously as a Ganbare Goemon collection. The series is relatively unknown over here, with only a scant handful of games receiving a localization. It’s perhaps better known as the Mystical Ninja series to English audiences; nomenclature that three of the games received. Over in Japan, however, it was quite prolific. It spanned multiple consoles with over 20 titles. In them, you play as an increasingly more cartoonish portrayal of Japanese folk hero, Ishikawa Goemon. It’s a series of bizarre villains, offbeat humor, and a restless inability to adhere to a single formula. I can think of no better set of games to cram into a single collection.

It’s unlikely that Konami would be willing to give us every game in a single collection. If it follows the trend set by its current collections, we’d be looking at eight-ish games from the series. Out of over 20 games, it’s a difficult decision to figure out which ones should be included and which can be set aside. I’m going to try anyway, so let’s take a look at what I think are the eight most essential games in the Ganbare Goemon series. 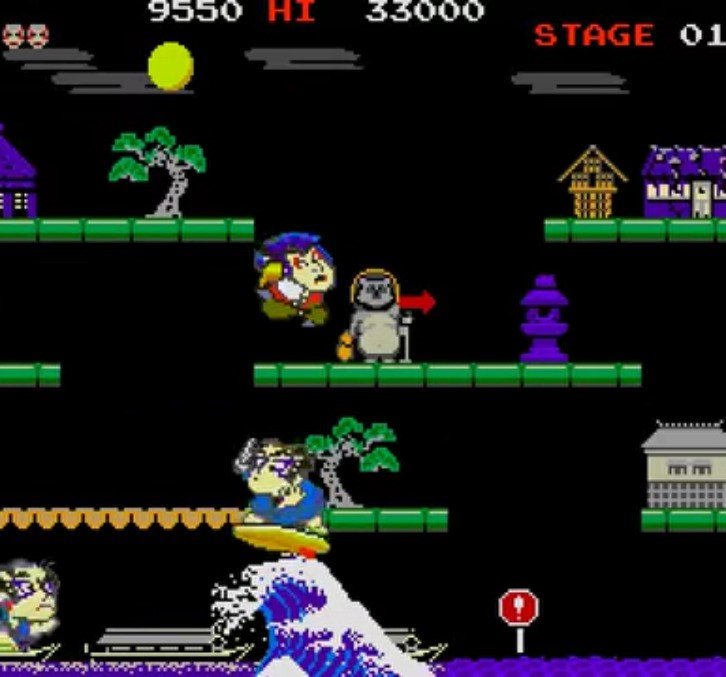 While the Goemon series is best known on consoles, it actually started with an arcade game. Outside its title character, Mr. Goemon is actually nothing like the games that would follow it. It’s instead a straightforward platforming affair that has you moving from the left to the right of the screen while evading guards or bopping them with your kiseru. Every so often, a boss will cap off a level.

Mr. Goemon stands apart from the series in both gameplay and its traditional Japanese art-style. The first game in the console series, Ganbare Goemon, was initially started as an attempt to port the arcade version’s gameplay, but instead mutated into something more like a beat-’em-up.

Initially released only in Japan, we eventually got a taste of it over here, first as part of the Xbox Game Room, then later as one of Hamster’s Arcade Archive titles on the PS4. It would be easy to skip out on Mr. Goemon, but I feel that as the progenitor of the series, it deserves to be in our compilation. 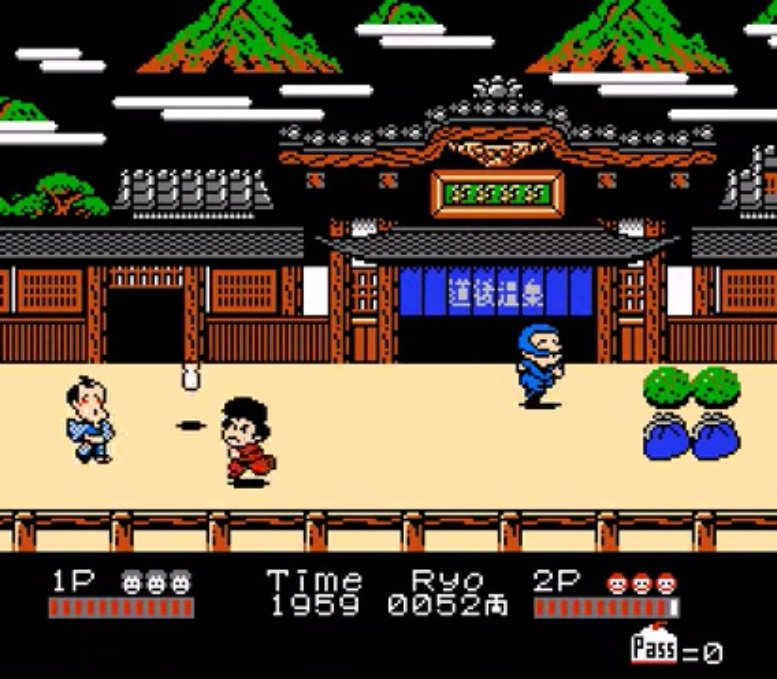 It may seem weird to skip the first game in the proper console series, but while Ganbare Goemon established many of the series’ mainstay mechanics, it was Ganbare Goemon 2 that began shaping it all into something more familiar.

Ganbare Goemon 2, like Ganbare Goemon before it, defies description. It’s perhaps best placed in the beat-’em-up bucket, as you travel the streets of Edo-era Japan and smack people in the face with your kiseru pipe. Most levels involve finding three checkpoint passes so you can exit through a gate. Some of these are hidden in underground passages you reveal by jumping over empty spots on the ground, others are tucked away inside mazes.

It’s here that we’re introduced to Goemon’s bizarre sidekick, Ebisumaru. With him comes simultaneous co-op multiplayer, a common feature in many of Goemon’s future games. Also, while the previous games weren’t strictly straight-faced, this is where things began to tilt in a weirder direction. The first boss you fight is a giant robotic sumo wrestler who throws his toupee at you. It’s only a glimpse into how weird the games would eventually become, but it’s the direction the series would continue to follow. 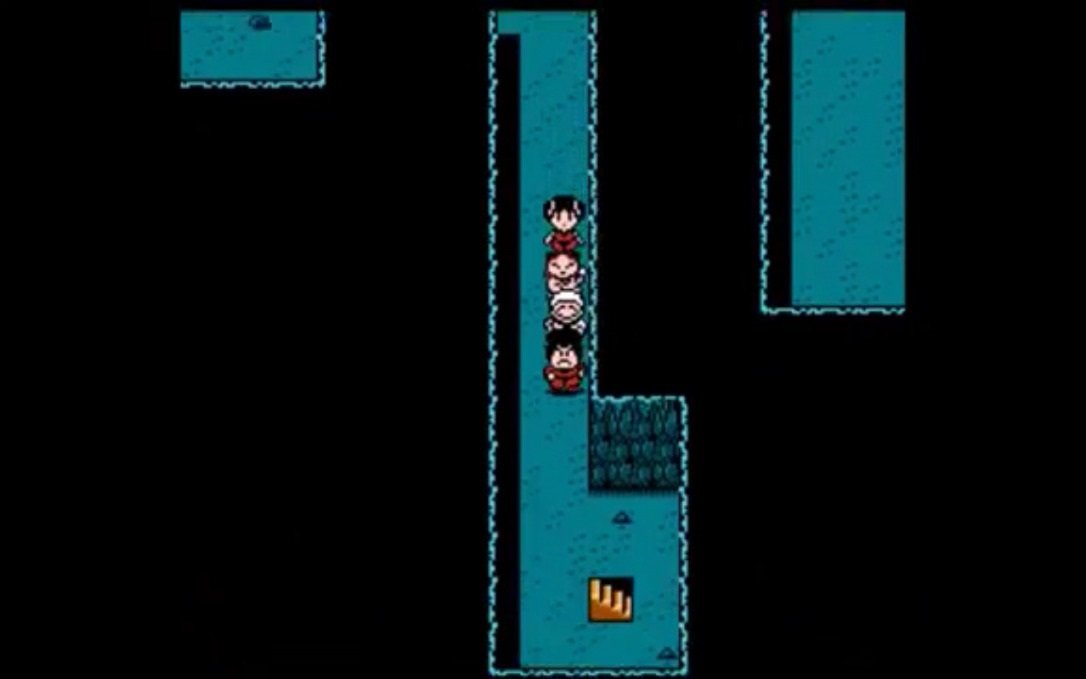 Konami wasn’t exactly known for its RPG’s in the ’80s, so it’s a bit surprising that its follow-up to Ganbare Goemon was a full-on JRPG in the Dragon Quest formula. The story involves Goemon teaming up with Ebisumaru in an attempt to find his missing kiseru. It further pushes the goofy anachronisms and nudges the series further into weirdness.

While Gaiden may be a spin-off, it did introduce some mainstay characters to the series, such as the kunoichi, Yae, and the ninja cat, Kurobei. It was followed up with a sequel, Ganbare Goemon Gaiden 2, that was similar to the original but even weirder. However, since we’re only giving ourselves eight picks for this collection, we’re giving the second one the ax in favor of some more traditional experiences. 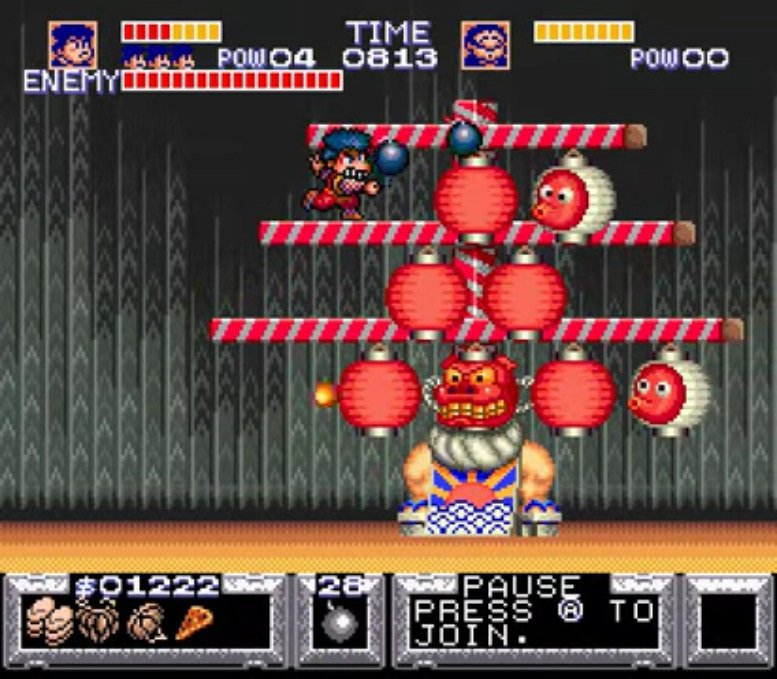 Legend of the Mystical Ninja was the first time the Ganbare Goemon series hopped the ocean to bring us its madcap depiction of Edo-era Japan. Rather than simply being an evolution of the established formula, Legend of the Mystical Ninja combines the fast-paced beat-’em-up style of the Famicom games and pops in some side-scrolling action stages for good measure. Mix in some excellent boss battles and a popping soundtrack and you’ve got a game that’s well worth playing.

It would be nice if the translation got touched up, though. Goemon and Ebisumaru were renamed to Kid Yang and Dr. Ying, which are so off base that it’s almost offensive. Heck, while we’re at it, maybe change the pizzas back into onigiri and bring back the striptease show. 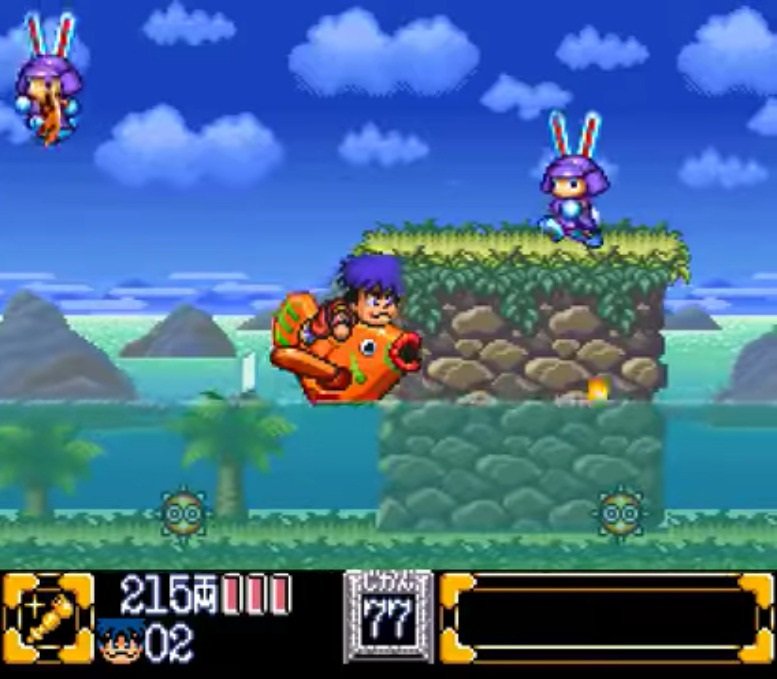 Rather than continue with the classic beat-’em-up formula that defined the series, Ganbare Goemon 2 changed everything to a straight up sidescroller. There are still towns that you visit to rest between levels, but they aren’t full of jerks trying to bash you over the head. Progression is handled through a Super Mario Bros. 3 style map screen.

If the previous games continually nudged the series towards the bizarre, Kiteretsu Shogun Magginesu solidified that identity. Sasuke, the clockwork ninja makes his first playable appearance, brings the number of playable characters up to three. Goemon’s giant robot, Impact, makes its first appearance. Impact levels involve avoiding obstacles and crushing towns, before capping off with a punch-out style fighting sequence. 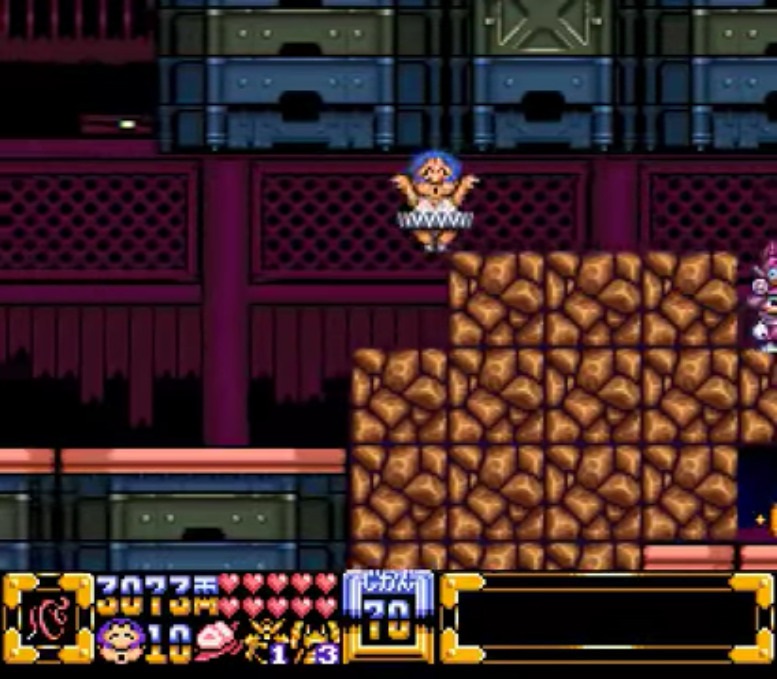 It’s not that Ganbare Goemon 3 was a bad game, but its Zelda-style overworld exploration wasn’t a good fit for the series. However, Ganbare Goemon Kirakira Douchuu is perhaps the pinnacle of the series’ weirdness.

The game involves the whole Goemon crew, now including kunoichi, Yae, traveling to space to defeat some random jerk named Harakiri Seppukumaru. Each character embarks to their own world, with each containing its own gameplay focus. It’s primarily a sidescroller like Ganbare Goemon 2, but most bosses include their own mini-game. Its greatest strength is its unpredictability. One moment you may be standing on a car as it falls towards earth while the next you’re surfing across an alien ocean.

Kirakira Douchuu may not be the best game in the series, but it has an amazing style to it that pushes the Super Famicom to its limits. The soundtrack is equally impressive, lending some horribly infectious tunes. Overall, it’s one that shouldn’t be missed. 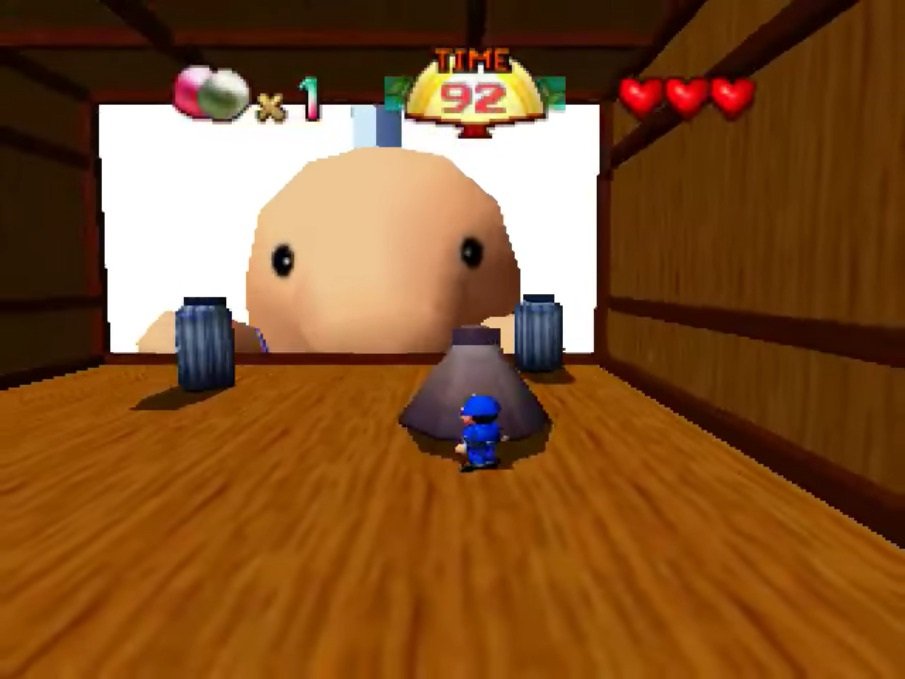 After continuing with 2D design in the Playstation’s Ganbare Goemon: UchÅ« Kaizoku Akogingu, things got shaken up on the N64. Going in a more Legend of Zelda direction, Mystical Ninja Starring Goemon was a fully 3D overworld/dungeon affair. Goemon’s first big N64 outing may not be the crown jewel of the franchise, but it’s hard getting past how interestingly designed it is. It takes place in a miniaturized version of Japan, making the whole affair feel like a big, cohesive, country-spanning adventure.

There are a few downsides to Mystical Ninja Starring Goemon. There’s no co-op this time around, so your Goemon buddy is going to have to sit this one out. It’s also incredibly lopsided in that typical early 3D era way. If you don’t have a tolerance for janky games, this one might test your limits. However, its design as a pre-Ocarina of Time release is undeniably intriguing and it deserves to be noticed. 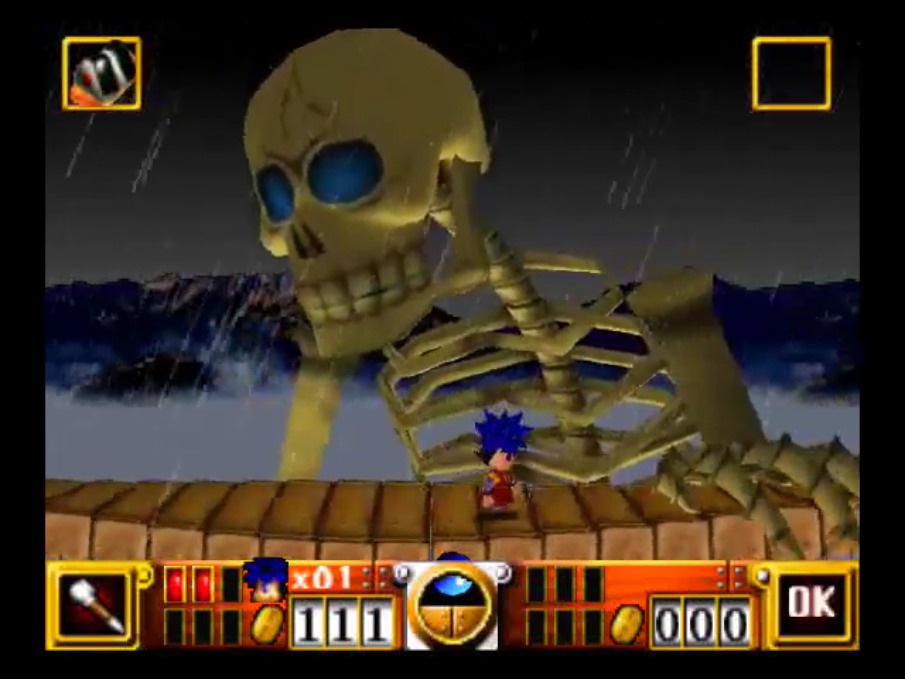 Dropping the full 3D adventure, Goemon’s Great Adventure returns the series to a more sidescrolling affair. In a lot of ways, it’s very similar to Ganbare Goemon 2 on the Super Famicom, including the map screen and towns to visit. The biggest wrinkle this time around is that, in order to advance, you have to collect a certain number of checkpoint passes, much like in the Famicom games. This time around, however, they’re gained by completing levels, as well as sidequests.

Goemon’s Great Adventure is a surprisingly tight little platformer. It’s perhaps not as inventive or unique as Mystical Ninja Starring Goemon, but it is a lot less janky and more fun to play today. If there’s one downside, it’s that it seems to expect you to already know who all these characters are. The lead villain, Bisumaru, for example, first appeared in Ganbare Goemon 3 on the Super Famicom. Anyone who missed out on that game won’t really get why they’re being antagonized by a Catholic nun that looks like Ebisumaru. Maybe I shouldn’t have axed that game from the collection. Oops. 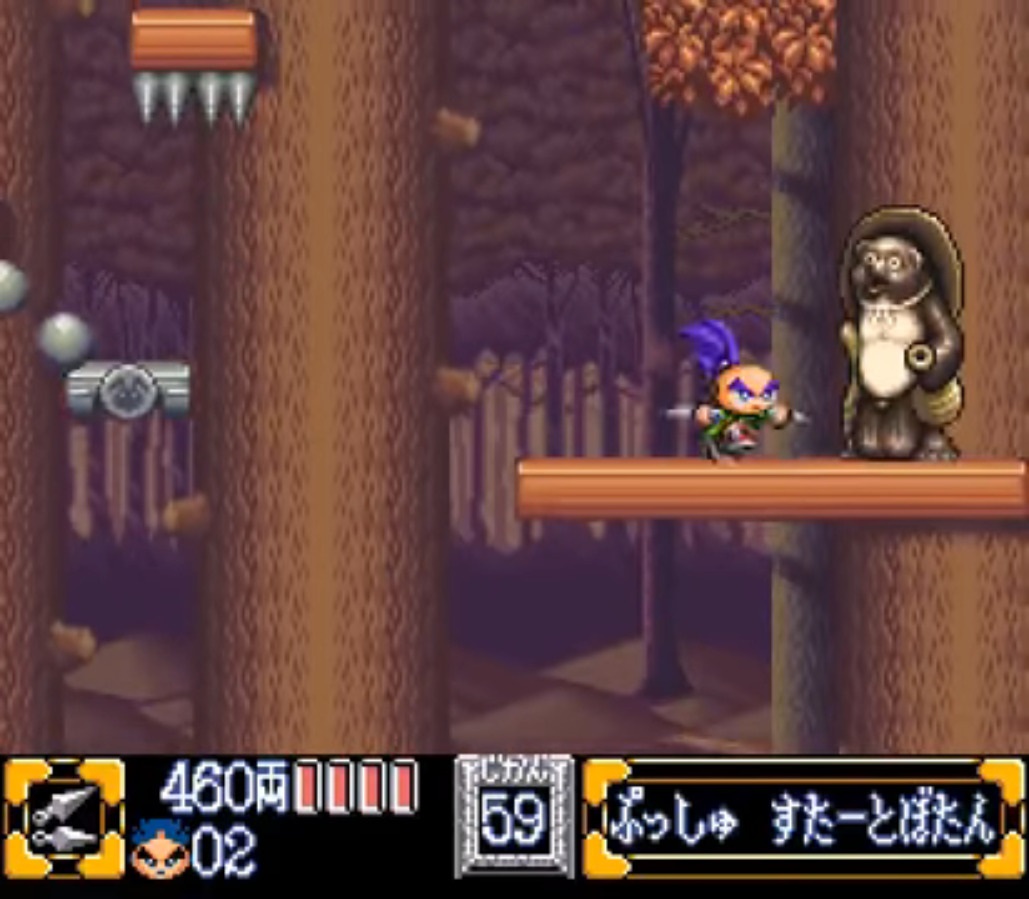 The series, much like Konami themselves, largely lost their way after the close of that console generation. There were attempts to make a more serious Goemon for the PS2, then another attempt to revive it as a futuristic take on the series. Finally, Konami tried returning to the original formula and characters on the Nintendo DS with 2005’s Ganbare Goemon: Toukai Douchuu Ooedo Tengu ri Kaeshi no Maki. After this, the series went silent aside from two pachinko machines: the place where Konami characters go to die.

It’s not difficult to understand why so few of these games were released in the west. They lean heavily into Japanese folklore, a topic that many westerners aren’t familiar with. The humor doesn’t always translate well, which can make it seem even more bizarre. Even still, the games that we did receive are generally remembered fondly by those who played them. It’s an important corner of Konami’s history, and as such, deserves to be remembered with its own collection.

What do you think? Are these the eight best games in the series to compile? Am I leaving out something essential? Let me know in the comments.