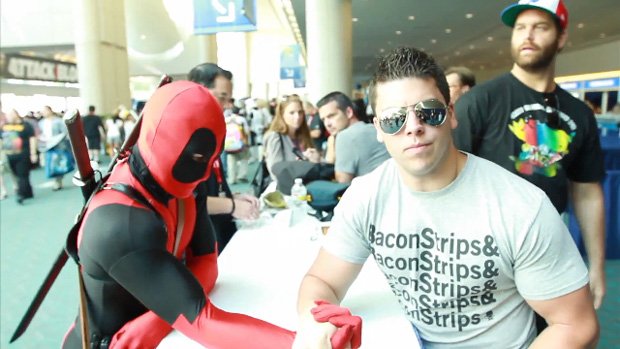 Watch your childhood icons crumble before your eyes as MusclesGlasses destroys every single superhero in existence at arm wrestling. Spider-Man, Batman, Superman, and even two incarnations of Sylvester Stallone go down in flames. Going “over the top” ain’t gonna help ya this time, Sly!

This weekend, Jesse Cortez brought us some choice nuggets from Evo2k11, Alex Bout built a cheap-ass PC that runs Battlefield 3, and Batman went way, way, waaaaay “beyond” in Arkham City. Other stuff happened too, so check ’em out.

BritToid Ep 13: Keep calm and do stuff with Angel!

Comments of the week: Don’t look at me just eat the salad

A casual chat with Fuelcell Games about a shadow planet

Evo2k11: Street Fighter 4’s twins are about to get nerfed

Win tickets to the Call of Duty: XP fan event!

The Sun: 3DS price cut due to gamers being dizzy, sick

The Sun: DEATH BY XBOX!

Wii is the most popular console for Netflix streaming

Oil up: Rhythm Heaven Wii gets a 4 disc soundtrack

Street Fighter X Tekken and SSF4:AE may come to the 3DS

Batman Beyond gets ripped in Arkham City

Get your The Binding of Isaac news: Now on the twitters

3DS, Wii U to support DLC

Sony is going above and beyond to help out indies

‘We are ROCK-MEN!’ CD keeps the Mega Man spirit alive

Bane to be a playable character in Batman: Arkham City
Offbeat:

Powerglove tears the Batman theme a new one

Mega64: They know Deus Ex better than you

This assassin will kill you… with cuteness

Ninja Baseball Bat Man is a… about… wait… WHAT!?!?

BattleBlock Theater still not out, here’s a new cinematic

Enjoy a full mission of The Old Republic with commentary