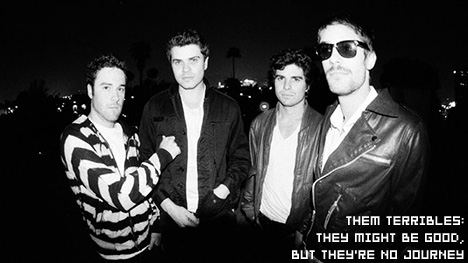 I’ve always been torn regarding Rock Band DLC songs. On one hand, I’m a poor college student — so every time I say, “Well, I won’t be giving Harmonix any of my money this week,” my perpetually thin wallet thanks me. However, the flip side is that I so desperately want to pay for new songs. I bought the ten-dollar six-pack of Boston songs without hesitation, and I’m chomping at the bit for more content. But lately, it seems that Activision has been on the ball when it comes to DLC artists, whereas Harmonix seems to be slipping.

That’s going to continue next week, when Harmonix will bring us the three winners of MTV2’s “Dew Circuit Breakout” contest. The contest began in September, when over 4,000 bands signed up for a chance to hit the big time, and the public voted on twelve finalists (chosen by an MTV2 panel) to pick the top three very poorly named bands: The Material, The Myriad, and Them Terribles. The spoils of victory include MTV2 airtime as well as getting their songs in Rock Band: “Moving to Seattle” by The Material, The Myriad’s “A Clean Shot”, and “Bullets & Guns” from Them Terribles.

In addition to the three contest winners, the English band Maxïmo Park will also be making their Rock Band debut next week with “Girls Who Play Guitars”. Each of the four songs will be available at the low, low price of $0.99 (80 Microsoft Points), while the Circuit Breakout three-pack will sell for $2.99 (240 Microsoft Points). As usual, the tracks will be available on Xbox Live next Tuesday and on the PlayStation Store next Thursday. For more details, check out the press release after the jump.

I don’t mean to hate on something before I’ve heard it; of course, these three songs could all be awesome and a hell of a lot of fun to play in Rock Band (as for Maxïmo Park, I’ve never heard of them, so the same principle applies). Regardless, I worry that Activision is throwing its weight (read: cash money) around to get more desirable artists (in my opinion) in Guitar Hero games. Bringing lesser-known stuff to the masses is a noble pursuit, to be sure, and I like the idea of Rock Band being used as a new avenue of marketing music. But I’d much rather have some classic stuff from my favorite artists in the game. What about you?

The Material, The Myriad and Them Terribles Land ‘Breakout’ Opportunity

Harmonix and MTV Games announced today the next addition to the Rock Band™ Music Store will be tracks from MTV2’s “Circuit Breakout” band contest winners The Material, The Myriad and Them Terribles, available on Tuesday, June 13. The three up-and-coming acts will join the ranks of some of the greatest rock bands including Metallica, Nine Inch Nails, Boston, The Grateful Dead, Queens of the Stone Age and more, as part of the Rock Band downloadable content catalog with more than 170 songs to date. Each track will be available for $.99 per track (80 Microsoft Points for Xbox 360®), or $2.99 (240 Microsoft Points for Xbox 360) for the three-pak.

Additionally, the northeastern England post-punk revival band Maxïmo Park will make their North American single debut with “Girls Who Play Guitars” as downloadable content for Rock Band. Having helped MTV launch Rock Band in Europe, they are even helping select the best Rock Band band abroad in a bid for a VIP stay in Ibiza. “Girls Who Play Guitars” will be available for $.99 (80 Microsoft Points for Xbox 360) on Tuesday, June 13.