Negan and Gabriel go on a date

If you’ve been following AMC’s eighth season of The Walking Dead, you know that so far, we’re dealing with the events of a single day, focused around the alliance’s attack on the empire, aka Hilltop-Alexandria-Kingdom (HAK, as I’m fond of calling them–for no reason whatsoever) against the Saviors. Inherently, with a show already in its eighth season, with ratings that aren’t entirely holding steady and showing slight declines, there’s always a sense that endings are inevitable, because they are. Outside of character decision making that ignores logical progression of any variety, the ability to squander screen time with a lack of plot progression remains TWD‘s biggest flaw.

We don’t have forever to come to resolutions for our characters or this world. One day, the plug will be pulled, and you’d hope that in the interim, the goal is to take the story forward so that when said ending arrives, it can happen in a fashion that satiates the audience. At least, that’s always been my understanding of how storytelling should work when it works best. TWD‘s done this before–season 2, on the farm, was like plodding through thigh-high wet snow, uphill. Its pace was glacial.

Season 8 makes season 2 look like torrential river waters thrumming through a gorge after strong rains. Five episodes down, three to go in 2017 and we’re still in day 1. 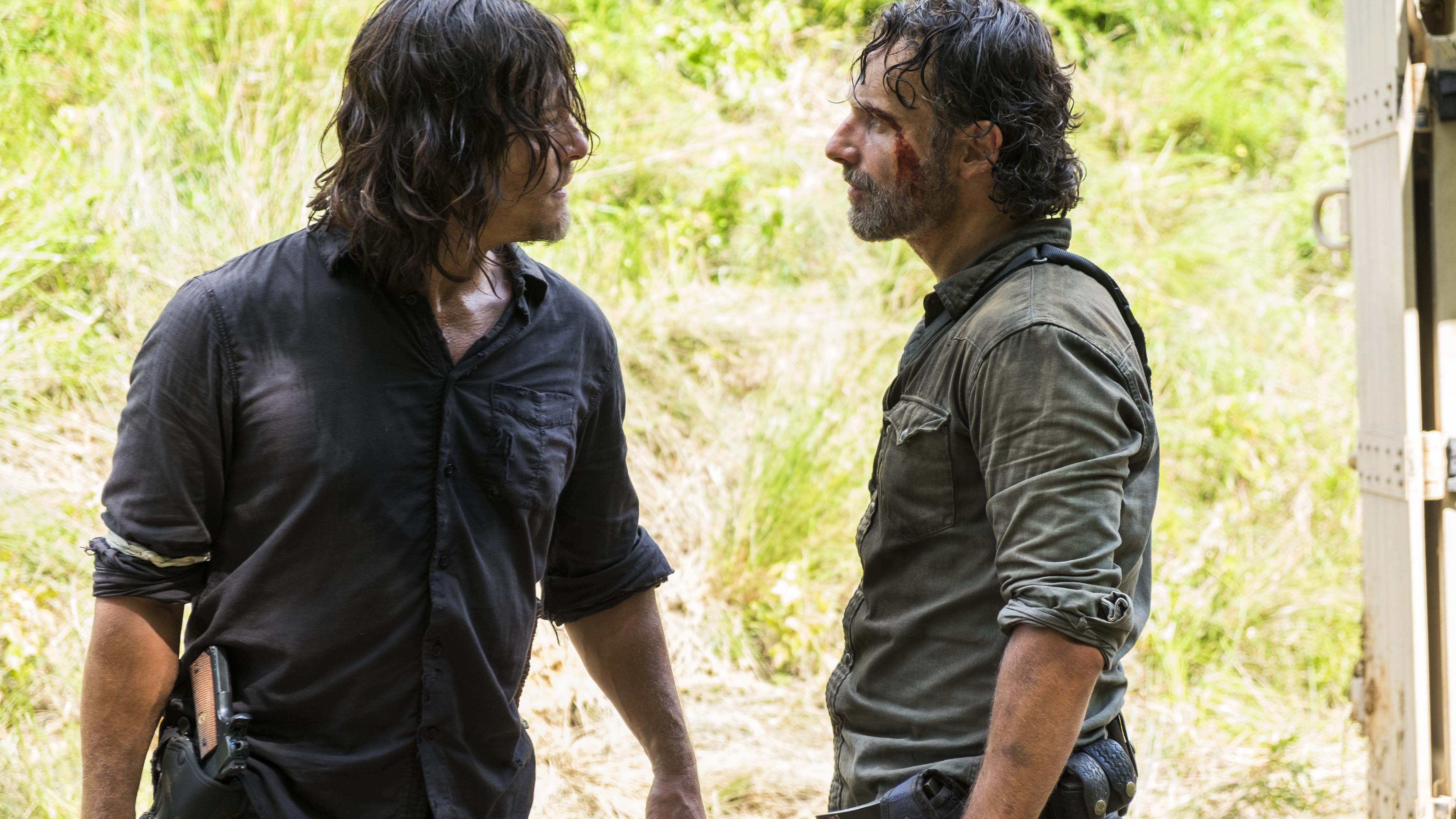 Obviously, there have been attempts to demonstrate psychological and emotional motivations or developments for some of our main players: Morgan is sliding backwards, having turned 180 from peaceful monk to bloodthirsty assassin. Rick is relentless and then repentant. Darryl is demonstrably more and more pure don’t-give-a-flying-f. Ezekiel is unshakable and then broken. Only, Morgan’s done this before–his entire character arch are the undulation of waves cresting and falling. Rick is nearly as psychologically unstable, prone to random shifts in emotional stability from staunch, resolute warrior to whimpering pup. Darryl, well, Darryl’s motivations are clear–he was tortured by these people, and betrayed by them time and again. And Ezekiel has been living in a literal fantasy land where he acted a role to provide stability to a people; of course he was due for the rude awakening that everyone in this story eventually endures (or gets killed before enduring).

We’ve now had two scenes where some of the good guys inexplicably try to murder each other. It’s true, sometimes when people spend too much time together, they start to get a bit testy with one another. And it’s true that in the world of TWD testy might translate to a more violent version of what you might expect from friends and allies, normally. But the confluence of these taken-too-far overreactions in such short succession is weak. It seems to fulfill no real purpose, and ultimately, in this more recent example with Rick and Darryl’s honeymoon-ending fistfight, destroys the weapons cache that was the precipitous motivator for the events of the last three episodes. Let’s be clear about this: the Hilltop lost its entire army (and Rick and Darryl know this–thanks to that last surviving Savior), Ezekiel is broken, Shiva is dead, and the sole reason for this, the weapons, has now been destroyed because Rick and Darryl suddenly can’t talk it out.

It doesn’t add up. I get that things go wrong in unexpected ways, but this feels too convenient as a means of balancing what might otherwise be a one-sided victory for HAK (Kingdom losses aside).

That’s the BAD, and the UGLY, now let’s talk about the GOOD.

‘The Big Scary U’ gives us our most in-depth look inside Savior society. Hey, these guys have corporate board meetings too! (A bit too Iron Fist for my liking, but fun all the same.) Negan has his trusted advisors, but ultimately rules them with an iron (leather-glove-clad) fist. The Savior society is a fragile ecosystem (or ‘economy’) dependent on a power balance between workers and soldiers with one Negan sitting astride the see-saw balancing it all through raw fear and intimidation. The moment Negan’s not in the picture and things aren’t 100% copacetic, it starts to fall apart. 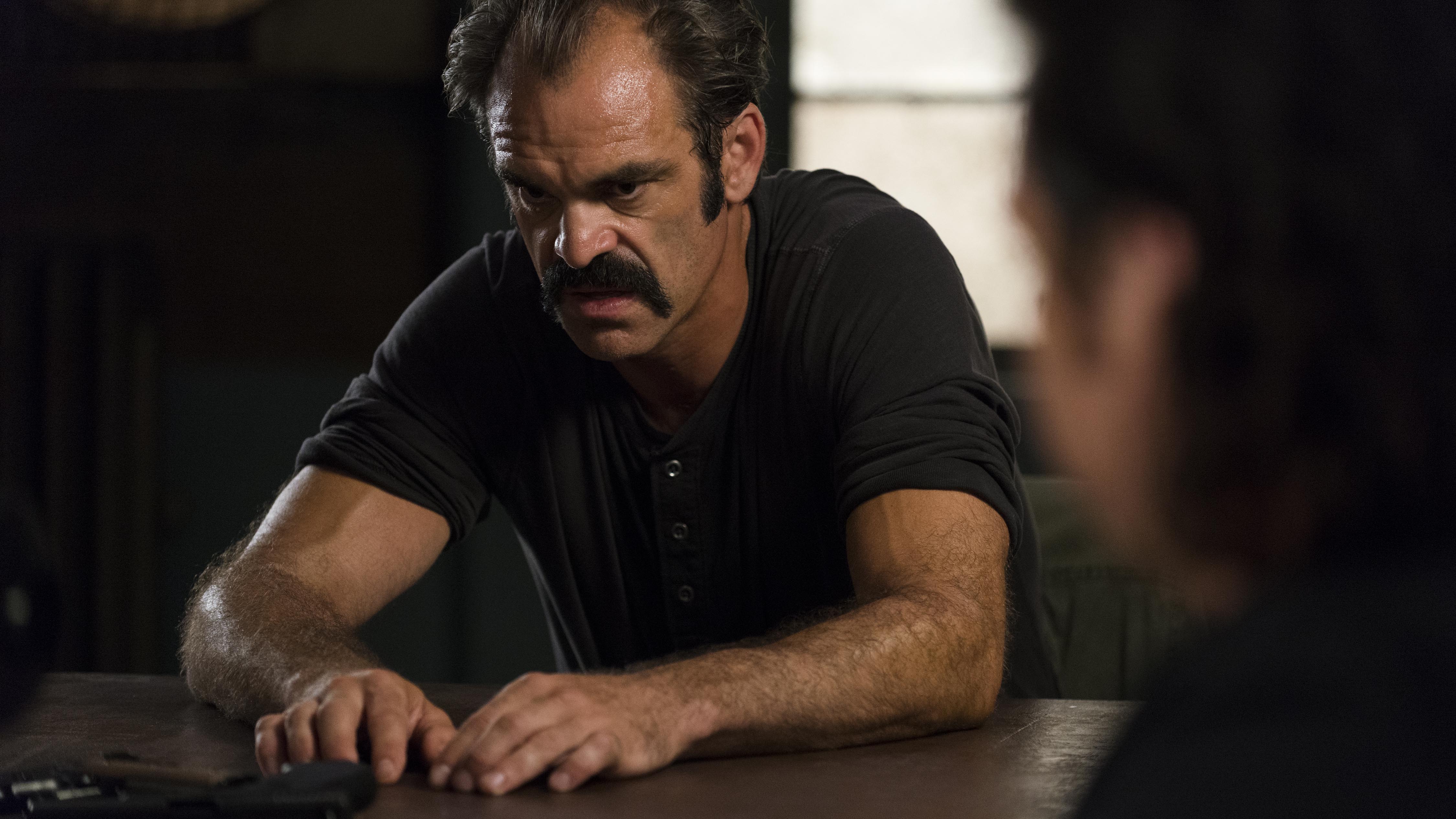 Speaking of Negan not being in the picture, we’ve been waiting three episodes to see what becomes of him and Gabriel inside the trailer in the midst of the walker herd. AMC had been teasing hard that Gabriel was in for some rough times, but Negan seems content to amuse himself chatting with Gabriel instead of using him for playtime with Lucille. 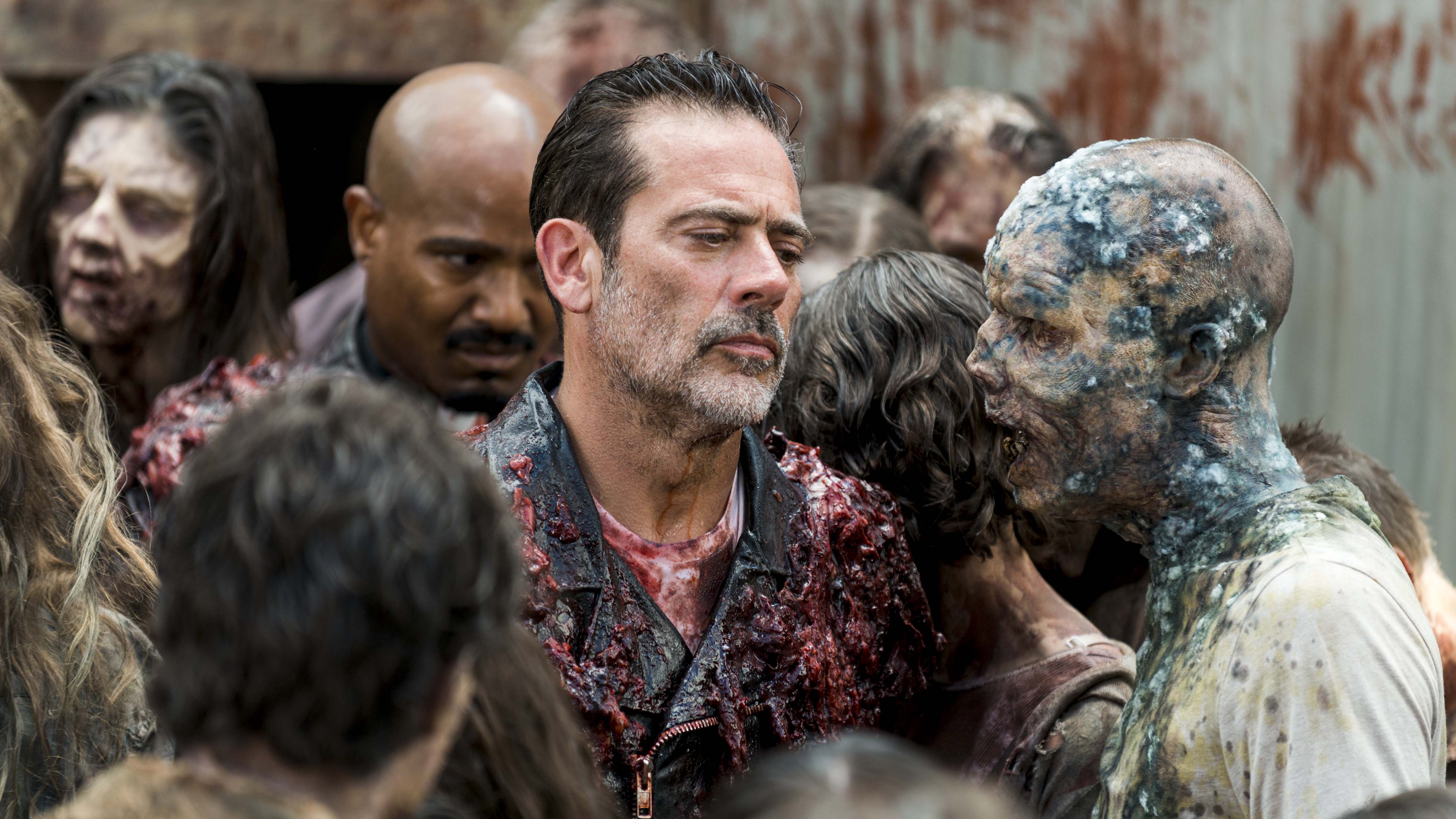 I know that the big takeaway from this episode is getting some of Negan’s backstory: supposedly. He reveals to Gabriel that he used to work with kids and set them in the right direction. He reveals that he had a wife that he cheated on constantly. And he reveals that he wasn’t able to killer her when she became a zombie. But, folks, this is Negan, a master of psychological manipulation, and until we’re shown flashback scenes proving anything he says to be true or otherwise, I’m not going to believe any of it, and I would suggest neither do you.

It seemed that when thing are getting a bit tense, and Gabriel is pushing Negan on his motivations, that Negan might have whispered ‘give me strength’ to Lucille, almost as if she were his cross, and he were speaking to God. Was Negan a priest in his past-life? Or is he just mocking Gabriel in the moment? To me, that felt like his most genuine, most human, near-breaking moment in the show, when the bravado and swagger were gone and maybe you could believe the words coming from his mouth. 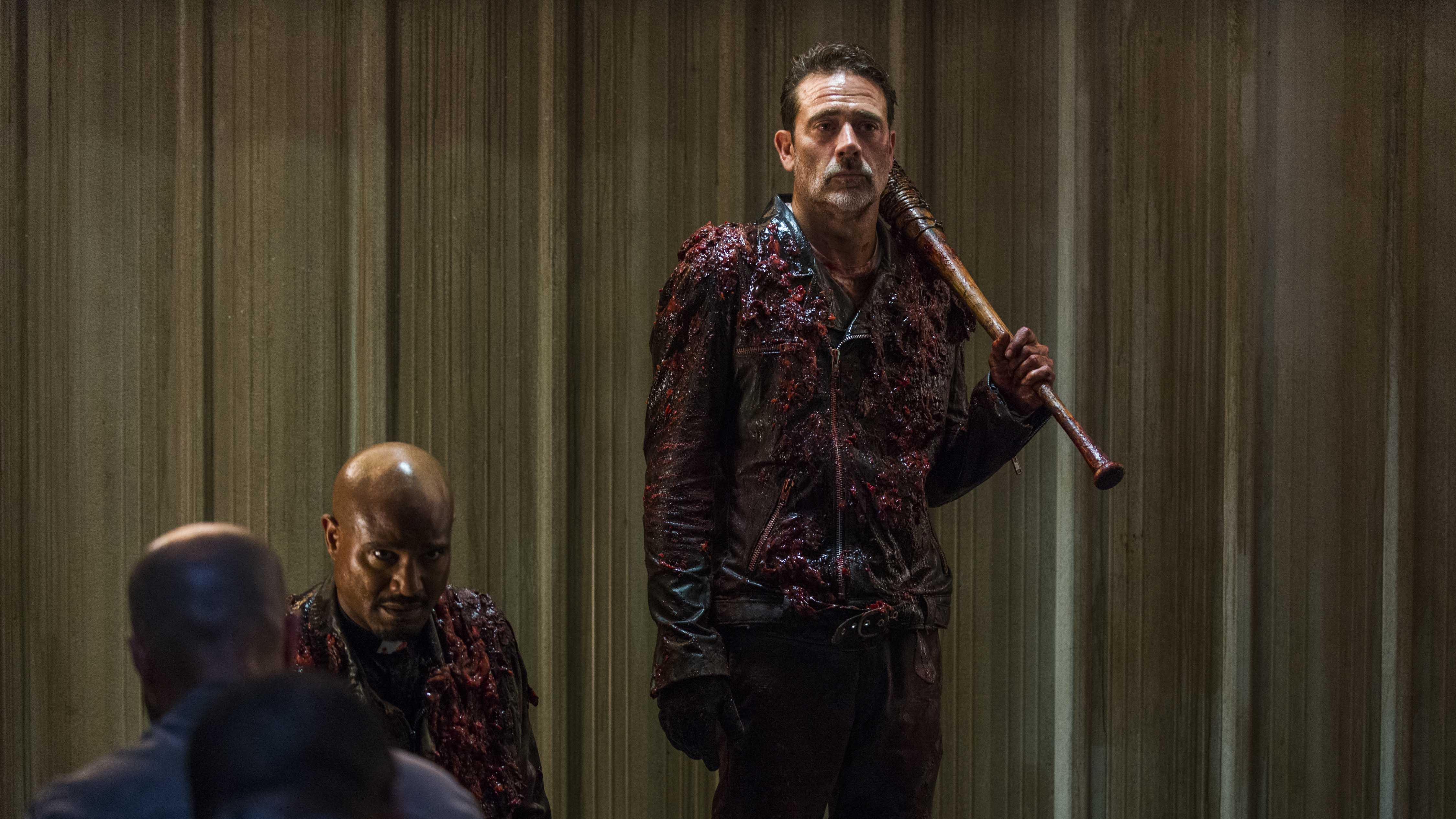 The highlight of the episode was watching Negan and Gabriel survive an apparently unsurvivable situation by employing the oldest (yet least-used) method of surviving walker herds: covering yourself in their rotting effusions and pretending to be one of them. Seeing Negan’s pure ice demeanor in contrast to Gabriel’s near panic diminutiveness was a wonderful contrast. Though, I’m not sure I buy into Gabriel’s meek (for the meek shall inherit the earth) pretense: there was something utterly unnerving about the moment when he told Negan he thought he was there to take his confession. Every now and then Gabriel says or does something that makes him seem like the scariest (if not creepiest or least mentally stable) character on the show.

In other developments, Savior upper-management suspects that someone is working against them from the inside. Eugene begins to suspect that the rat is Dwight and also tries to bribe him with pickles.