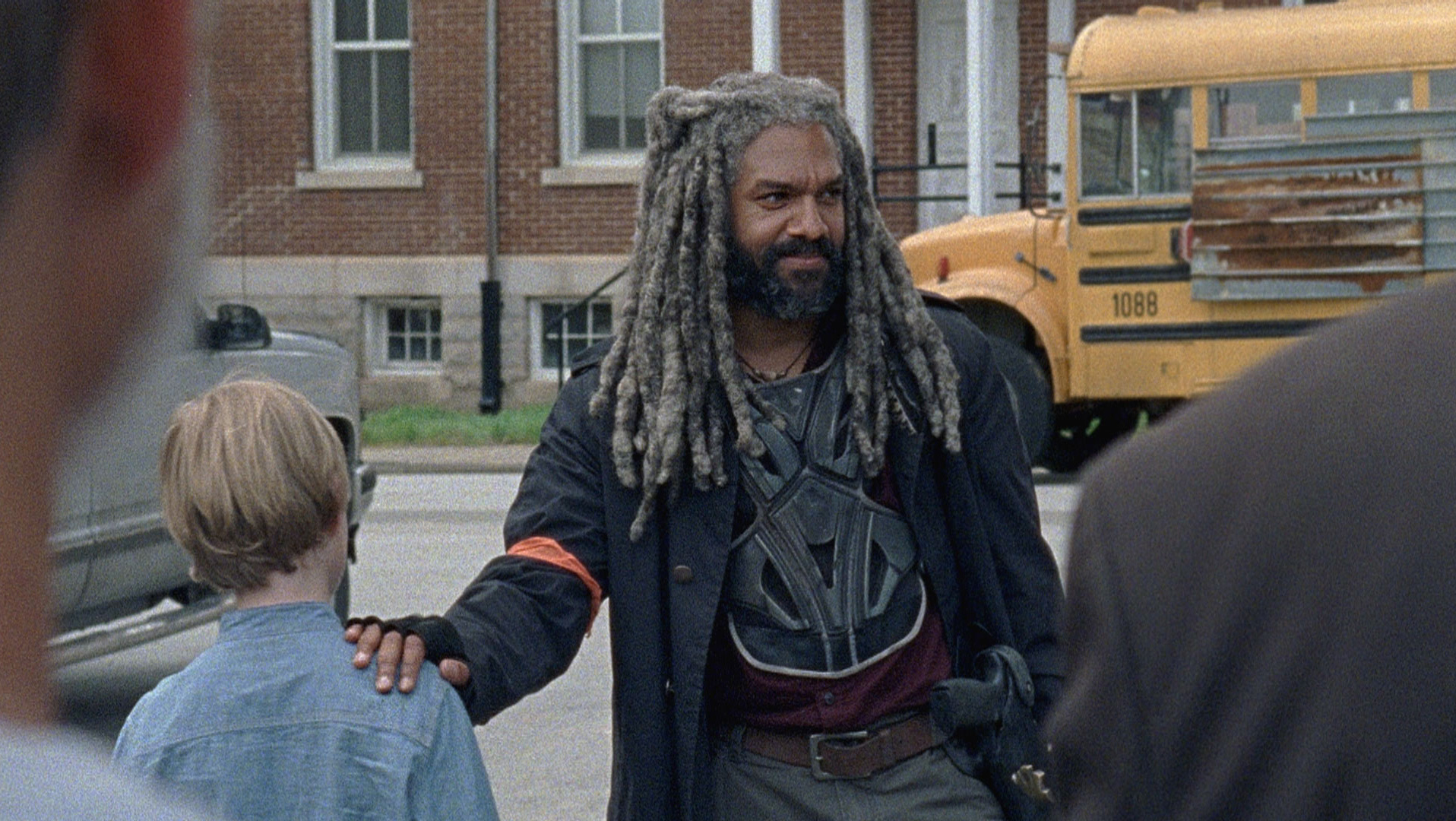 ‘Some Guy’ (TWD, s8e4) kicks off with Ezekiel calmly donning his persona, he’s indoors, and clearly not in danger. For a moment, it’s unclear if we’re viewing some time after the ambush that concluded last week’s episode, or if we’re getting a flashback. If I’m being completely honest, I was momentarily worried we were going to get an origin story episode, which the show (smartly) has steered away from in recent history.

But fortune favors the bold (aka you, the readers) and we’re granted a short memory. It’s a baseline to set the standards for who Ezekiel is, as we (and as his people) know him. He dons his mantle of King, takes a deep breath, and is full of rock steady optimism who knows that he and his people will win. But of course, we know how last week’s episode ended. And it’s a safe bet, that as we see Ezekiel providing another motivational speech (we’ve gotten a number through these first 4 episodes: first from the Triumvirate–Rick, Maggie, Ezekiel–and then from Ezekiel again, keeping his people, and Carol, on point) to the people of the Kingdom.

They gather round him, all touching and cheering in one solid, but disconcertingly small, group of people.

Then comes the predictable cut to where we left Ezekiel: among his people, and the slaughter by large caliber machine-gun.

Essentially, ‘Some Guy’ is an introspective into Ezekiel and watching his heretofore unshakeable conviction be not only shaken, but broken. It’s interesting to watch, though the early contrast scenes are perhaps the most the most effective, as they build on his bravado from last week, wherein he exclaims how they’ve not ‘lost a single one’ in their latest battle with the saviors. When Ezekiel comes to his senses now, he’s lost every single one (or seemingly).

Right around this time, when Ezekiel realizes that his entire group has been blown to pieces by heavy machine-gun nest first, and his former friends and followers are zombifying, we turn to Carol, who split apart from the group that and is inside the building where the machine-gun is hidden. Carol pulls some Carol maneuvers, and all is well with the world. Not everyone in our HAK (Hilltop-Alexandria-Kingdom) alliance is an idiot. We still have some operators! And I find myself thinking, man, Carol is an effective tool in highlighting smart survival skills versus poor ones. The annihilation that took place outside, Ezekiel’s utter failure, is in greater contrast when thrown up against some of Carol’s standard winner-decision-making. It’s almost effective to show idiocy versus smarts. Or it would be, if Carol remained consistent.

After dispatching 5 guys in utter perfection, she can’t commit a similar ambush with the same efficiency, and instead sets up one of the least believable gun standoffs ever (another 5 guys versus her, pinned down behind a pickup truck). Not only do the superior numbers not flank her, or rush her, or anything, they don’t instantly kill her when Carol pulls a fake-surrender.

In earlier seasons of TWD, character stupidity is more easily forgiven as the world is newer, the odds less known, and the depth of evil to your enemy less explored. Now, in season 8, we should be dealing with survivors: people who are either very mean, very clever, or both. Yet, we continue to see people exhibit the street smarts of novices plucked off our own streets. I don’t buy it, and I especially don’t buy it when it comes from the Saviors, again, a group that has proven tactical smarts behind its organization (and utter ruthlessness!). When someone begs for their life in exchange for information, do you get close enough that they can get a knife on you? NO! You pull a Daryl and gun them down when they’ve said whatever they’re going to say.

Here, it’s interesting to see how the Saviors act as you’d expect HAK to act, and Daryl to behave as you’d expect a Savior to act. Intentional? Perhaps, but the idea that there are two sides to every coin and that labels can be applied by both sides (bad guy / good guy) has been explored before. In fact, the only group that seems to get universal labeling may be cannibals.

If you’re expecting action to expand beyond this limited theater, reel in those expectations now. This episode follows Ezekiel, and his growing horror at not only failure, but leading people, totally faithful people, to their death, and his responsibility for that fact. His nature fights itself, with survival instincts kicking in here and there, and a willingness to die to protect more of his people, but ultimately, he becomes beaten down, and eventually settles on the conclusion that he’s better left to die because he’s just some guy. But others see value in him beyond his most recent failure. They’re either incredibly insightful (Jerry), or they’ve lived harder lives (Carol) in this post-apocalyptic world, and know that even the best leaders and people suffer losses and must go on.

Rick and Darryl make one appearance at just the right moment so that the death of the entire Kingdom army is not without purpose. The guys are secured, and Carol proves that she’ll choose to help a man she admired instead of pursuing a tactical mission. OK. Points proven, yet did we need to spend an entire episode demonstrating that anyone’s faith can be shaken in this zombie kingdom? We know this already–and it felt like a cheap gimmick when that last big death happened. I know it’s supposed to pull tears, but I just felt angry–it was unnecessary, and cut short an interesting plot line for no apparent reason (other than perhaps budgetary constraints to animate a tiger?).

So, again, we’ve progressed a few hours in this same day that’s comprised the first four episodes of the season, but it’s unclear if any of this action has shifted things in favor of one group or another–I really can’t tell. Rick and co. have more guns, but in terms of casualties, they seem to be losing (since they take prisoners). They’re down one super-tiger, and one shaken leader.

What do you think? Who’s winning so far? How did you take the death of Shiva? Unnecessary, or a rightening of an unlikely plot device that probably shouldn’t have existed in the first place and served a purpose at the end of season 7?

Also–what do you think Negan is going to do to Gabriel (if anything)? The teaser scenes for next week promise we’re headed back to the Sanctuary, finally.