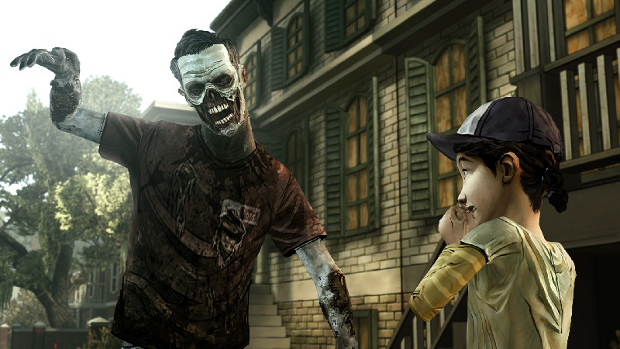 If you’re yet to play the penultimate episode of Telltale’s harrowing tale of survival and zombies, then don’t watch this video. Don’t even read this post. Go back to whatever it is you were doing, or, better yet, go and play the damn game. It might not be the best of the bunch, but it’s still gut-wrenching as hell.

Telltale has put together a brief video, breaking down the choices in Around Every Corner, and showing the decisions players made up until now. The Walking Dead has felt like a personal journey, through and through, so I honestly never really paid much attention to the statistics revealed at the end of each episode. However, there’s admittedly something cathartic about seeing other people making the same choices that you did, especially when they turn out to be terrible — which they are, nine times out of ten.

I feel vindicated by seeing that most of the choices I made were also made by the majority of players, up until the end. I’m also a tad surprised, too. I mean, I felt pretty crap after I saved Ben, who has been without a doubt the most worthless piece of crap ever to survive a zombie apocalypse. I was so sure I was going to let him die, but nope — I’m a stupid softy.

Everyone who, like me, let Clem join them on their journey to the school deserves a pat on the back. You’re meant to be protecting her, so leaving her with a dying man is just asking for trouble, besides, she has some gun training and a lucky cap.

The biggest shocker was certainly discovering that most of you opted to be honest about the zombie bite. I would have been right there with you in the first episode, or even the second, but by now I’m a complete wreck and I don’t trust anyone; so there was no way I was going to let a whole bunch of people with guns know that I’m about to start munching on brains in a few hours.

The final episode is almost upon us, and I’ve left everyone but Kenny behind. He might be an angry redneck who murdered a man having a heart attack, but after the shit we’ve been through, from killing his son, to trying to support his insane delusions of finding a ship (okay, we did, but it wasn’t looking likely for a while), I know he’s got my back.

So, what choices did you make? Do you regret them? Of course you do.