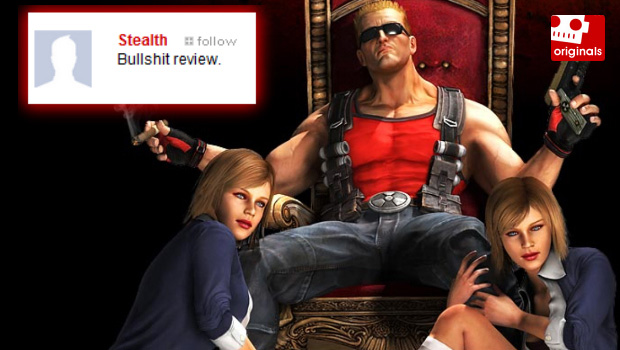 Destructoid reviews can get something of a … spirited … reaction from readers. Our scores don’t always line up with the majority of other publications, and some gamers can’t stand that. However, as we learned this year, even when our scores do line up with others, people can still get pretty mad about them.

We thought it would be fun to gather some of the craziest “review controversies” seen on Destructoid this past year, that we may relive the memories and share in the warm laughter as 2011 draws to a close.

Seriously though, what is wrong with some of you people?

The rage started early this year with a 7.5 for this PS3 exclusive and a hefty dose of resulting rage. For those not in the know, a PS3 exclusive is never allowed to score lower than a nine, otherwise 13-year-olds around the world collectively shit themselves, smell the shit, and type literal equivalents of what they smell as comments on blog posts.

The game did get a good score and a recommendation that fans buy it, but that didn’t stop people telling me on Twitter that I “won’t stop the game selling,” as if my goal was to bankrupt Media Molecule. Anger around the Web was worse than on Destructoid itself, but this article thread still contains some idiotic gems.

Star Comment: “Alright, who fucked up and gave this fat ass an A grade release to review? Go back to your fritos and Sonic manga you fucking joke and let the real writers review these games.”

It’s hilarious that so much anger blew up around this review because, seriously, who the Hell is playing Hyperdimension Neptunia now? I am fairly certain most of you didn’t even remember it existed before now, if you even knew it existed in the first place. In any case, I can attest that the game is just as bad as Matthew Razak said it was. In fact, I practically begged him (or anyone else) to review this because I found it too painful to play, despite having looked forward to the game so much.

Still, at the time, fans were sneeringly accusing Matthew of not understanding the game, while playing one of their most popular cards — claiming the reviewer was playing “out of his genre.” This is a very common method by which reviews are invalidated, stating (without evidence) that the reviewer has never liked a game in a particular genre, so his opinion can be discounted. I guess that’s easier than defending your shitty game. In any case, people got mad over Hyperdimension Neptunia, and now nobody remembers it. What was the point?

Star Comment: “Pfft, whatever. I was just in it for the lolis anyways.”

If there’s one thing this year taught me, it’s that people do NOT fuck about when it comes to weird little JRPGs. We had Darren Nakamura review this PSP title and people got pissed. While it only received 78 comments — low by shitstorm standards — there was a lot of rage to go around.

Darren was accused many times of being “wrong” with the review or of writing a half-assed article, but nobody seemed to be able to point out what was so wrong with it. Yet again, he was accused of not liking the genre, even though he does, and writing an unfair review. Despite not blowing up to the degree that other reviews on this list did, it contains pretty much every example of how not to deal with a review that you disagree with. Worthy reading for research purposes.

This review became such a shitstorm that, even six months on, people still reply to a 6.5 review score with “At least it’s better than Witcher 2.” In truth, this highly regarded RPG had a lot going for it — it was grown-up, looked gorgeous, and stood out as a seriously solid PC exclusive. However, due to a range of problems that conflicted with its ability to be fun, the game was merely decent at best. It was an okay game, but Witcher 2 wasn’t spectacular.

Believe some commenters, however, and you’d think I hated the game beyond all reasonable contempt.

The review peaked at 622 comments, with very few of them actually defending the game or arguing the review’s points, instead focusing on my marvelous breasts or lack of talent. One particular comment declared that The Witcher 2 was “for the master race, not you damn console derps,” and that we should “leave [his] games alone and enjoy [our] own boring filth.”

A lot of PC elitists crawled out of the woodwork to cry foul and crow about their superiority, because PC gamers are fun like that.

Star Comment: “My God this guy is a joke! A 6?? What a dumb azz like somebody else said if it was Mario or pokemon he would have gotten an erection! If you are a fan of rpgs you will love it don’t listen to this jack-azz!!!!”

Whatever score it was getting, Duke Nukem Forever was going to be a wild review. It was one of the most famous cases of videogame vaporware in history, finally resurrected and released, with hype going through the roof. Unfortunately, the actual game was an offensive, insulting exercise in horrible gaming. Levels felt literally patched together from bits of random code, the combat was mediocre and repetitive, and the overall game resembled some troubled, canceled, sloppy title from over a decade ago — which is what it was.

People got mad, but it was Jim Redner, head of the Redner Group, who got the maddest. He was the PR rep for DNF, and he complained about “venomous” reviews (particularly a certain 2/10 one) and threatened to blacklist a number of publications. He later apologized for this threat, but his behavior is still remembered and is solidified as part of Duke Nukem Forever‘s fucked-up legacy.

Star Comment: “I think I hate you. Never before have I read such a harsh review for a good game. You are worse than all of IGN put together.”

This may be my favorite review of the year. I haven’t gotten around to playing my copy of Solatorobo yet, but whether I like it or not, I respect Allistair Pinsoff’s willingness to damn the trolls and say what he thinks. This is a guy that truly gets what Destructoid reviews are about, which is why I am proud to have us feature his writing. In any case, he didn’t like this game at all and gave it a 4/10. The fallout that followed, for an obscure DS RPG, was intense.

This little review garnered a staggering 579 comments, although part of the blame must go to the evil tag team of Jonathan Holmes and Tony Ponce who were stoking the fires of fanboy rage in a deliberate effort to break the 500-comment barrier. Destructoid’s resident village idiot Stealth also contributed hugely, rushing to post “bullshit review” and then spending the entire thread going apeshit. On the first page of comment alone, Stealth had racked up 12. The whole thread is worth reading to watch a random kid having a nervous breakdown over a random review on the Internet.

Star Comment: “For the record personal opinion should never be in reviews ever. If that was the case for different people every game of a particular genre would get a 1. Just based on there personal opinion.

“A review is a critical examination of a game and only that game. Not based on something else.”

One of the most ridiculous controversies of the year, I actually got hate mail from a reader furious about this low score. He called Destructoid gay and asked why we gave Arkham City “such a sting” with the review score. I mean, really, 8.5 is a “sting” now. This review really typified the “hate out of ten” phenomenon that’s swept gamers (and at least one developer) this generation, where great review scores are despised for not being great enough. It’s a really sad direction to head in.

Naturally, some accused the review of looking at Metacritic and deliberately scoring lower, even though the review went up at the same time as everybody else’s, so that would’ve been impossible. For many, it didn’t matter how good the score was — it was the lowest score on Metacritic at the time, and that meant the review was horrible. It’s quite frightening how some gamers want all reviewers to have exactly the same opinions. When it gets to that point, we might as all just publish the game press release and call it a review. Seriously, this growing desire for the game community to enter an Orwellian dystopia is fucking alarming.

Star Comment: “Good to see Jim is at his main game as always: ATTENTION SEEKING. If this game was an 8 Jim would give it a 5, just so people would see the metacritic and say WTF and come here and see why. That’s OK Jim, we know that anything Kirby is a 10/10 game. Keep it up Jim! Busy now. Will come back and chat later. This review gets its own score: 3/10!”

Every year, gamers react to one particular review in a way that shocks me completely. This year, Modern Warfare 3 took the prize with a reaction I have never before seen and may never see again. The sheer anger, hatred, and outright spite this review got was utterly astounding, and I still haven’t quite worked out what went wrong. I am aware that it’s become cool to hate Call of Duty now, but I didn’t realize people hated it so much that they attacked anybody who liked it.

This may be the first positive review I’ve seen that caused such levels of anguish and fury. Usually, a positive review makes fans happy while non-fans simply ignore it. That did not happen this time around, and you can almost feel literal heat when you open the review up and look at the comments. It seems some people were bitterly disappointed that I did not attack the game for them, seeming to believe that reviewers are now hired hitmen who carry out drive-by criticisms of games on command. Sadly, we’re not. I still like Call of Duty and I loved Modern Warfare 3. People will need to deal with it.

Holy shit though, this one had me in shock for a few days. I still can’t get over just how mad people got at somebody enjoying a videogame!