At every Sony event this year, the portable rhetoric was identical — the Vita is getting games, but they’re ports, or in rare cases, multi-platform releases of existing games.

As an original Vita and 32GB memory card owner since day one, I will be the first to tell you that I love playing it when I feel compelled to do so. I’m so glad that I was an early adopter and got to keep that OLED screen, as it’s one of the best portable experiences I’ve ever had. I enjoyed exclusives like Tearaway and Gravity Rush for months on end. It was awesome.

Then the games stopped. The Vita still gets the occasional unique game like Toukiden: The Age of Demons, but for the most part, it loses exclusives these days. I’m not against ports and sometimes the Vita is my preferred method of playing them, but the platform is not sustainable without system sellers and exclusives. 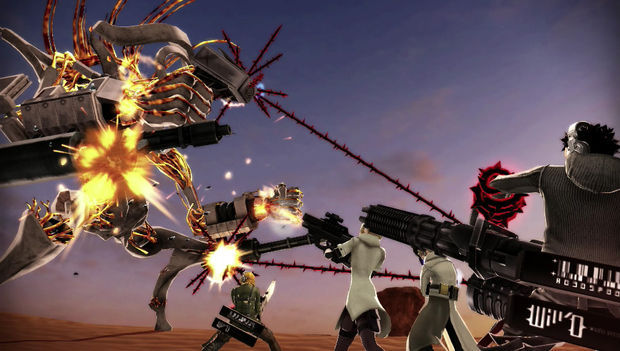 That’s why I’ve been spending so much time with Freedom Wars. I was a bit late to the game with this one having picked it up last week, but man is it good. The dystopian theme that punishes you with more prison time for taking too many steps or running without a license — gold. The Attack on Titan gameplay that lets you swing onto giant enemies and slice them to bits — amazing.

Although it shares many similarities to hunting games like Monster Hunter, it’s actually more streamlined and action oriented than that, and honestly, it’s all the better for it. Although you won’t spend 100 hours hunting and crafting that perfect spear (which, lets face it, can get old), it’s incredibly addicting to pop in for a few missions, reduce your sentence, and pop out. It’s literally perfect for the portable format.

The gameplay is incredible slick and very fun, and most importantly — it makes you feel like a badass pretty much out of the gate. There’s no need to grind before having fun, and it’s easy to pick up and play. After a few hours everything starts to open up, and you can begin customizing your weapon style a la Monster Hunter, as well as your trusty whip mechanic and your social standing. There are only a few weeks left in 2014, but Freedom Wars is easily one of my favorite games of the year, and it just feels great on the Vita.

I am incredibly grateful that SCE Japan Studio decided to make such a great game for the Vita, and I’ve spent countless hours playing it despite only picking it up last week. If more games like this can hit the Vita more often that I can’t get anywhere else, more and more people will start to notice it.