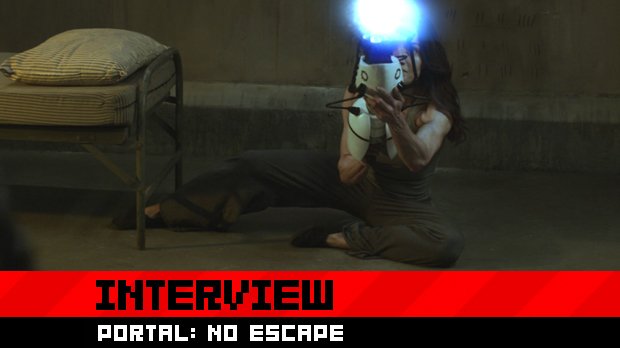 You probably didn’t notice Jonathan Skabla’s name amid the slew of credits at the end of Portal: No Escape, the recently released short by Dan Trachtenberg of The Totally Rad Show. He might be a faceless animator to you, but to me he’s my best pal. He’s the guy who’d greet me on Tuesday afternoon with a beer and a copy of Streets of Rage 2.

Jon has moved on and up since our days of sharing a squalid apartment. He was part of a team under Jon Chesson (an animator responsible for some of the VFX you see in games like Resistance 3 and Twisted Metal) and worked on many of the shiny, glittering bits you see in the final film. Today, I sat down with my buddy to get some insight into the environment that brought you Portal: No Escape.

For starters: what’s your background in the industry?

And how did you get involved in this project?

A very good friend of mine, Cesar Kuriyama, saw one of my posts on Facebook one day in May complaining about how I was having a hard time finding more freelance work.  He contacted me and asked me if I would be interested in working on a really awesome short, pro bono, since I had free time. He could not continue on the short because he was asked to give a TED Talk and needed the time to prepare. I told him yes, and he handed off some shots he had just started to me, and the director gave some other ones that I started from scratch.

How closely did you work with the project leads?

I worked very closely with Dan and Jon even though I am NYC based and they are in LA. I got on several calls with Dan Trachtenberg throughout the project and I spoke to Jon Chesson almost daily via GChat.

During a phone call, Dan and I discovered we had met many times before and never realized it. We both attended college in Philadelphia. I went to the University of the Arts and he went to Temple University. During his time there he was working in their 16mm film developing room. I used to walk down there all the time to develop my Kodak film. He’d taken over running things after the previous manager left to work at my school. Small world!

What were your duties on the film?

I composited 7 shots. Shot 5 (she looks at the barrel and blue light illuminates her face), 8 (she turns to camera with amber portals behind her), 8a (she turns to camera with blue portals behind her), 11 (we see her from behind as she runs into the amber portal), 12 (short shot after the door opens when she falls to the ground), 12a (she is on the ground, fires the portal above the guard and kicks the cot so it falls onto the guard), and 20 (when she first runs out onto the rooftop)

What moments are you particularly proud of?

Shot 5 and and Shot 12a are my favorites because the blue light cast by the gun was entirely created by me. In shot 5 it was a combination of hand animated paintings that were tracked onto her face, and screened on, and isolating her highlights and tinting them blue. I also used a 3D version of the gun built by someone else on the team to add additional lighting to the gun as well. Shot 12a was strictly isolating the highlights on her skin, and parts of the background wall and tinting them blue.

What are the differences between working on a personal project like this versus a big budget picture?

Well first of all on a big budget film you are all in the same building! We were all spread out across the country. Dan and Jon were in LA along with other team members, and myself and a few others were NYC based, and I believe our CG guy was in Connecticut. Other than that we all have worked on big budget projects and films, so we know what to do and how to do it.
What’s your schedule like when working on a project? How long does the average FX shot take to construct?  Is there a significant difference between animating a teleportation portal and painting a movie star’s reflection out of a window?

Well, I created the inside look of the portal but the main particle system used for the ring was made by Paul Griswold. I made some supplementary particle systems to suit my needs (like fly off particles, some dripping particles, and a few loose wispy ones) but all the rings were created by him.

As far as how long it took to composite: it was all after hours work. We all have day jobs, so we would pick up work on Portal after we got home. A slap comp takes about a day. Then revisions and sweetening, probably three or four days per shot. With something like painting a reflection out of a window: that’s all about tracking, and just cloning, and copying preexisting pieces over the undesired reflections. In a scene like shot 8 or 8a in Portal, we were adding 3D elements that do not belong. So color correcting, adding light FX, and camera distortions/blurs to really sell it takes longer to do. 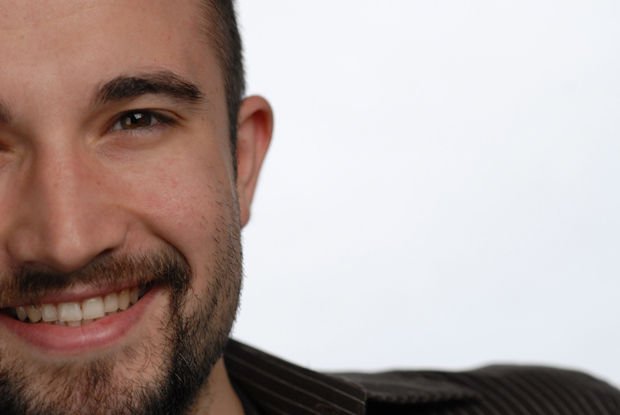 Are films where you’re gonna stay, or do you have aspirations in games too? What sort of advice can you give to the up and coming artist?

I have worked my way up from preproduction to films and that is where I’d love to stay. My advice is never lose sight of your goals and focus on your weaknesses. If you can’t make them strengths at least remove them. When I first moved from Philadelphia to New York City I knew I was only going to work in test commercials for a short time. Then I was going to move on. Despite this particular companies best efforts to keep me, I left when I planned to leave. I taught myself the programs I needed to know, studied every second I could (still taking Nuke classes even today) and made lots of friends with people who knew them better! This way I could ask them lots of questions! Also, FXPHD, and Video Copilot are your best friends!

So basically: work your ass off, make lots of friends, be willing to wade through shit when necessary.

Exactly. You are never too good for a project. Ever.

Now, if you’ll permit me to sass you: did you actually PLAY portal?

No. A long time ago when I worked as an assistant editor, I watched an editor, Rob Aiello, beat the first one (he has no relation to Danny Aiello. I think I have asked him that over a thousand times). The song at the ending credits always made me laugh.

Knowing your internet habits (or lack thereof), you’re probably the only person in the world who doesn’t know how big of a meme that song became. Alright then, when you’re not working, what games keep you busy these days?

My heart belongs to Survival Horror (Silent Hill, Resident Evil, Dead Rising, Alan Wake) however I find myself playing a lot of Fallout 3 and Fallout: New Vegas. I have been known to also play games that no one in their right mind will play (Kingdom Under Fire: Circle of Doom, Deadly Premonition, God Hand, Alone in the Dark)

Some people might take umbrage to you calling some of those games bad! If I can scrape together fifty bucks will you start production on a God Hand feature film starring me?

Ha. Well I am not a Director, nor am I a DP. So if you can find them, a camera man, a camera, get a set crew, find somewhere to shoot, and figure out whose going to do the DI then sure. I’ll comp it.

What’s next on the block? I know Hollywood brings in the big bucks, but don’t abandon game-related films right after you’ve started!

I am most definitely not! I would rather like to make a Fallout short. I talked to Jon and Dan about it but with everything going on like it is with Portal I think it will be a long while before we can actually sit down and have a proper conversation. I also told them whatever short they move onto from here that I would love to be a part of. My pipe dream is someday when I get much more established and I get the right plot going I’d love to write a script for a Silent Hill movie.

I know I already promised fifty bucks to Godhand, but I’m willing to go as high as sixty for any Silent Hill script better than Silent Hill: Origins or Homecoming.

That won’t be a problem.

Well, thanks for talking about the film! And tell Dan and Jon and the rest of the team that we thank all of from the bottom of our hearts.

I will! They will love to hear it I promise you!