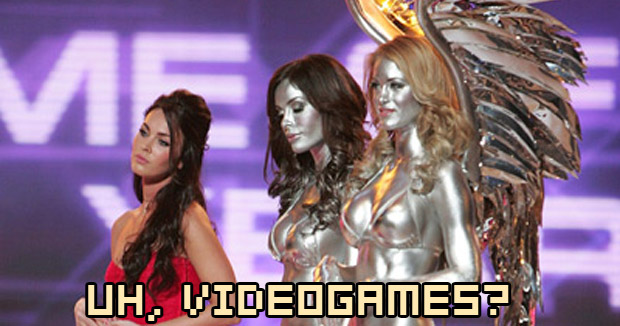 It’s undeniably fun to see the creators of some of your favorite videogames on TV looking uncomfortable with Kiefer Sutherland and Doogie Howser. It’s also undeniably interesting to watch celebrities talk about videogames. Some clearly love the medium, and others are just faking it, but either way, it’s satisfying to watch them try. Oh, and I guess the actual awards are interesting, too, but… not really. For the seven years the show has been on, the year that more than two games that I actually liked won something was in 2005. The VGAs just don’t reflect my taste in games.

That’s fine. For something to gain my respect, it doesn’t have to be tailor-made to my tastes. The VGAs do a great job of providing the Spike TV viewership with a recap of games that year that were made to appeal to that channel’s demographic. I mean, I don’t particularly like playing Uncharted 2 either, but that doesn’t mean that I don’t see how well-crafted the game is, and how well it entertains fans of that sort of game.

So, what’s my problem? If the VGAs are so great, why am I writing this? Well, I guess I’m just an idealist. Although I accept what the VGAs are, I can’t help but think of what they could be.

Okay, this intro’s already rambled on for too long. Hit the jump for my full take on Spike TV’s Video Game Awards.

In the title of this post, I brought up the idea that the VGAs may be a bit self-loathing. Honestly, I don’t think they are, but like any award show, they are not entirely self-loving either. As a rule, awards shows put things down more than they build them up. For every game that was nominated for an award in a  given category, there were hundreds that people loved just as much that get no recognition. To say that you love some videogames is to inadvertently say you don’t like other games. It’s the nature of the awards show beast, and the reason why they tend to piss off so many people.

In the case of the VGAs, the ability to piss people off is further intensified by the show’s relatively narrow scope when it comes to what types of games are “good.” Again, part of this is due to the fact that this is Spike TV‘s Video Game Awards. This isn’t Adult Swim, Syfy, or NBC. For better or worse, this is the “man” channel. If it’s not stereotypically “manly,” it doesn’t belong here. That’s probably why New Super Mario Bros. Wii, a game almost universally appreciated by critic and gamer a like, wasn’t nominated for Game of the Year this year. It’s a fantastic game, but other than the difficulty in later levels, there isn’t anything particularly “bad-ass” or “testosterone pumping” about it.

I do wonder if there is more to it than that though. When I look at the games that are nominated this year, I can’t help but notice a pattern. All of the GOTY nominees go for “realistic” graphics and a “cinematic” experience. All of the games consist mostly of running around and punching/shooting humans or humanoid creatures in a game world that borrows heavily from Hollywood movie logic. Now, I know that Uncharted 2 gets sort of supernatural towards the end, but it does so in a very Raiders of the Lost Ark way. In fact, in terms of underlying content, every game this year could have been a Hollywood blockbuster.

What does that say about the VGAs’ concept of a good videogame? To me, it says that maybe, just maybe, some of the creative minds behind the show think that a good videogame can “transcend” being a videogame, and become something “better” — a popcorn movie.

It makes sense. The Oscars do the same thing, albeit in a slightly different way. If you look at which movies have won Best Picture over the past 60 years, you’ll see a pattern. Period pieces, biopics, adaptations of famous novels, and dramas have a near-monopoly on the category. Movies that really take full advantage of what the medium can do are almost always ignored. Instead, the highest honors are reserved for for movies that replicate the feeling of a slightly more respected medium (books) or the most respected experience of all: real life. If a movie makes you feel that the people on the screen are really back in the 1800s falling in love, or that Nicole Kidman really has a big nose and a depressing life, then it must be good. If a movie is filled with creative visual metaphors, amazing action sequences, painstakingly crafted comedic performances, or terrifyingly horrific moments, who cares? That’s all “gimmicky movie stuff” in the eyes of the Academy. It’s got to “transcend” the world of movies to be really worthy of praise.

That’s where the self-loathing comes in, this need to “transcend to the next level.” On the scale of respectable, stigma-free, “adult” ways to spend your free time, real-life experiences like traveling across the world or having a life-changing, dramatic conversation are #1, reading an amazing book or poem that’s totally smart and deep is probably #2, seeing a “great piece of cinema” is #3, and going to a “beautiful concert/art gallery/Broadway show” is probably #4.

Then there is a huge gap.

After the gap, there are things like reading a comic book or playing a videogame. Below those two are watching pornography and playing with toys. Below that, you get stuff like pulling the wings off of flies and eating boogers. How far below picking boogers is from playing videogames is definitely a matter of whom you talk to. I’ve told many people over the age of 40 that I work for a videogame Web site. I have told a slightly fewer amount of over-40-year-olds that I sometimes like the smell of my own farts. Overall, I think I’ve gotten a better reaction from the fart-smelling admission. It at least gets a laugh. Tell someone in their 40s that you work for a videogame Web site, and you’ll likely get some stares, awkward pauses, and maybe an “Oh yeah, my kids really love those things” token acknowledgment.

Videogames may carry a lower stigma than they used to, but they are still something that the powers that be see as childish, primitive, and stupid. Want to say that a movie is shallow and over-stimulating? Say that it’s “just like a videogame.” Want to quickly show that a character in a movie/TV show is anti-social and lonely? Show them playing a videogame. And what kind of videogame? Well, it shouldn’t be a driving game, or a 2D platformer, or puzzle game. It’s got be be something with a lot of violence, with some guys punching/shooting each other, and a lot of explosions.

Despite the fact that “Hollywood” games try very hard to transcend the world of gaming and offer an experience as respectable as a movie, they aren’t getting much respect from mainstream entertainers for their efforts. Hollywood doesn’t even respect Hollywood movies; why would they respect a Hollywood game? Imitation may be the best form of flattery, but it’s not always the path to respect.

You know what’s also not the path to respect? Getting celebrities that have next to nothing to do with videogames show up at your videogame awards show. All that tells people is that you wish you were making an awards show that was focused on something cooler than videogames. I mean, I like Kim Kardashian’s behind as much as the next guy, but unless I can get a 1up for uppercutting it, I don’t see what it’s doing at the VGAs. It’s certainly not doing anything to pay tribute to videogames.

I know that celebrity appearances are a must for any televised awards show, or else the general population won’t pay attention to them. More so, like I said at the start of this post, I love celebrity appearances. I wouldn’t want them to leave the show entirely. I mean, I like the Super Bowl halftime show, too, but that doesn’t mean I want that to be the whole show.

I wouldn’t want Hollywood games to be totally ignored in the GOTY category, either. Those games may not be my thing, but they are absolutely worth of praise and recognition.  What I’m thinking is that the VGAs could take a few more risks to better represent the full spectrum of gaming and gamers. The show could do a bit more to take pride in videogames as a unique medium, and the people that play them.

Here’s what I’m thinking; what if, between appearances from Mike Tyson and LL Cool J, you got to see a a three-minute fight between two of the best Street Fighter IV players on the planet? How about a battle between the two best Rock Band players in the world? What if, for two minutes, the show had an interpretive Tetris dance, with people dressed in tetramino costumes interlocking, combining, and disappearing? What if, among the multiple new trailers for games that are either based on Hollywood movies or look like Hollywood movies, you get a trailer for something like Mega Man 10 or No More Heroes 2? Why not at least try to show that along with celebrities and male power fantasies, videogames can be a lot of other things too?

Celebrities may bring in the ratings, and Hollywood games may be popular with with the Spike TV audience, but they don’t have to be the whole show. I think the minds behind the VGAs would be surprised to see how much more respect (and higher ratings) the show would get if it reveled a bit more in the fact that the show is, in fact, all about videogames. Being yourself and expressing your thoughts on the things you are passionate about is the real way to win people over.

You know those 40-year-olds I told you about who look at me funny when I tell them I work for a videogame site? Well, most of the time, after I tell them just how amazing videogames can be on both a primitive and sophisticated level, they don’t look at me funny anymore. Whether they “get it” or not, they can’t help but see how much I genuinely love games, and genuine love is something that demands respect above all else. It doesn’t matter how boring a topic may be; if you talk about it with respect for yourself and the listener, and genuine passion, people are going to be interested.

That’s what I’d like to see from the VGAs, and who knows, maybe this year that’s what we’ll get. The show starts in just a few hours. Let me know if you think they pulled it off.