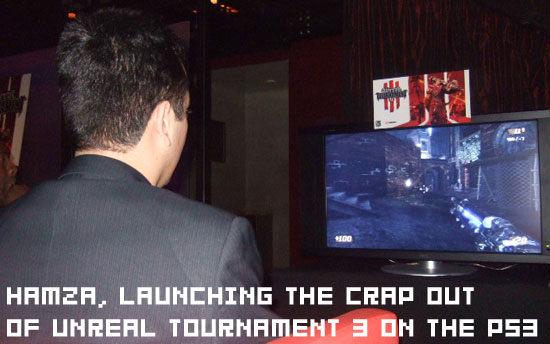 It’s hard to believe, but the release of Unreal Tournament 3 is nearly upon us. The game whose engine has powered countless next-generation titles will finally be seeing a PC release on November 19. Epic and Midway threw a launch party at the hip San Francisco night spot Mezzanine, and Destructoid (in the Voltron-like form of Hamza, Husky, Tiff, and myself) were in attendance to frag some fools, down some drinks, and eat some sake-drenched chicken.

While the party was held to celebrate the launch of the PC version of Unreal Tournament 3, a last second decision was made to have the PlayStation 3 version of the game in the house. Set up for multiplayer across four high definition screens, the game ran as smooth as its PC counterpart, with almost no obvious visual differences.

From what we gathered, the version on hand was a complete build (if not close to final), and contained every multiplayer mode that will be found in the final retail disc, as well as the single-player campaign. But just because it’s “done,” don’t expect to see the game this year — the title will almost definitely be shipping in early 2008.

Keep your eyes peeled soon for some video from the event, including Tiff’s interview with the man, the myth, and the legend, Epic’s Vice President Mark Rein.